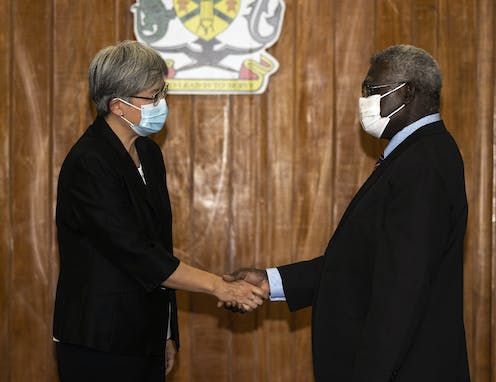 Foreign Minister Penny Wong was no doubt expecting a cooler reception than her three previous visits to the Pacific when she touched down in Honiara last Friday. The Solomon Islands government website had not even listed the Australian minister’s visit – but it did note the first visit of a Saudi...

Foreign Minister Penny Wong was no doubt expecting a cooler reception than her three previous visits to the Pacific when she touched down in Honiara last Friday.The Solomon Islands government website had not even listed the Australian minister’s visit – but it did note the first visit of a Saudi Arabian tourism minister, happening the same day. With this visit, Wong walked a diplomatic tightrope that no senior minister in the previous government appeared willing to.

Solomon Islands leaders have had a very crowded schedule of late, as highlighted by the Solomon Star newspaper. It said Wong was the latest foreign figure to arrive on Solomon Island shores after a number of “high-level visits from USA, Japan and China recently, before and after the signing of the security pact”.

The security pact in question is the one signed on April 20 between China’s foreign minister, Wang Yi, and Solomon Islands’ foreign minister, Jeremiah Manele. Solomon Islands Prime Minister Manasseh Sogavare explained the riots of November 2021 left his government with “no option” but to enter into such a security agreement to “plug the gaps that exist in our security agreement with Australia”. What these “gaps” are, he did not say.

Since that signing, the entire Pacific has shifted in myriad ways. Wong has been very busy in her first month in office trying to reduce its impact.

Read more: Saying China 'bought' a military base in the Solomons is simplistic and shows how little Australia understands power in the Pacific

She has had some wins with Fiji, Samoa and Tonga. Also, Australia assisted with the rapprochement at the Pacific Islands Forum, which has emerged reinvigorated after the stress test of the past year, when one-third of the members threatened to leave. This was averted with a special meeting in Suva on June 7, with Micronesian leaders transported to it on Australian planes.

The biggest win so far, for which Wong can take some credit, was for her work in advance of the Pacific Islands Forum meeting on May 30. Here, the ten nations that recognise China did not collectively sign on to become “China-Pacific Island countries”. (Federated States of Micronesia President David Panuleo rallied the region with a stirring letter that instantly became a classic text.

A whirlwind multi-nation visit by Wang before and after the May 30 meeting added inducements for working more closely with China through numerous bilateral agreements.

Wang spent the most time on his trip in the Solomon Islands. The effect of his effusive welcome by Sogavare, encapsulated in the photograph of the pair linking arms, denoted the “iron-clad” ties the two leaders were cementing between their nations.

In addition to the game-changing Framework Security Agreement, the Solomon Islands and China “achieved eight-point consensus” during Wang’s visit.

This is a template agreement Wang has already shopped around Asia in 2021, tweaked for national specificities and concerns. In the case of the Solomon Islands, it mentions working together on “climate change” and “marine protection”.

Given all that China has offered Sogavare and his political allies – to the great detriment of the nation according to Opposition Leader Matthew Wale, who has charged the security deal is “a personal deal to protect the prime minister” – what could Penny Wong offer?

Read more: On the Pacific, the new government must be bold and go big. Here's how the repair work could begin

On her visits to Fiji, Samoa and Tonga, not being a member of the Morrison government that clung to its coal power and climate policies gave Wong a lot of mileage. This is the most important issue facing the region, recently reiterated in an impassioned speech at the Shangri-La Dialogue by Fiji’s minister for defence and policing, Inia Bakikoto Seruiratu. The Solomon Islands is no exception.

That said, not being a Morrison government minister did not get Wong very far in Honiara. As she had signalled she would, Wong announced more vaccines donations and an expansion of the very popular (and desperately needed) labour scheme, the topic on which she got the most questions at her press conference.

She also visited a school and lunched with women leaders, who would have raised the dire need for improved medical facilities. Notably, it seems Wong did not meet Wale and other Sogavare opponents.

Very subtly, Wong presented an alternative to the China path. Unlike Wang’s visit, which greatly restricted press coverage, Wong encouraged it, no doubt hoping word would spread as it reportedly had in other parts of the Pacific.

But what about “our shared security interests”, as Wong termed it? This got little traction in Honiara as Sogavare will not walk back from the China-Solomon Islands agreement. On the election campaign trail, Wong described the pact as “the worst foreign policy blunder since world war two”.

Many anticipate China will build a naval base, as appears to be happening in Cambodia. However, Sogavare has assured Wong, and others, this will not occur. What may happen is that maritime militias appearing as fishing vessels, which China has used to great effect in the South China Sea, will slowly build a China military presence if there is not a change of leadership and direction in the Solomon Islands.

The recent “dangerous” confrontation between a Chinese fighter jet and an Australian airforce plane in the South China Sea on May 26, the day Wong began her visit to Fiji, is another sobering instance of tactics that might move south.

While Wong’s visit did not deliver big wins, it did not make things worse. She got reassurances, but given what Sogavare has signed onto with China of late, there is a clear lack of connection between words and deeds. What Wong did do is signal another way forward for Sogavare’s considerable opposition.

In the coming week, a multilateral Pacific Islands effort will be announced in Washington DC that involves the US, Australia, New Zealand, Japan and France.

Given this, it is almost certain that the tempo of visits to the Solomon Islands and other Pacific nations is going to rise.