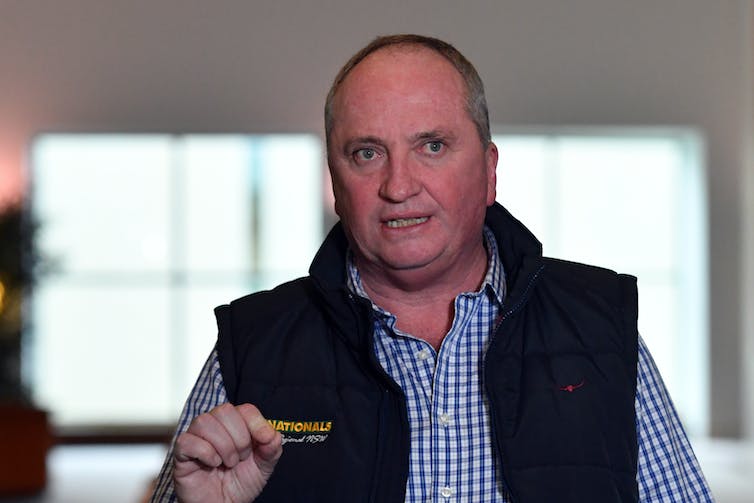 Barnaby Joyce, old-style populist and controversy magnet, has gone from the Nationals leadership. In his place is Queenslander David Littleproud, a move that indicates a desire for at least the appearance of change in the party.

Joyce knew how to play the role of the folksy bush politician; one can almost hear the echoes of “Dad Rudd” when Barnaby talks. The problem was that in tandem with Scott Morrison’s distinctive “salesman” political style, it created a way of conducting political life that many found abrasive.

Although the Nationals did not lose any seats at the 2022 election, it is not surprising they chose to elect a new leader. It drew a line underneath the defeat of the Coalition and indicated a desire for a new beginning.

Ironically, the two-party-preferred swing against Joyce in New England (1.09%) was smaller than that against Littleproud in Maranoa (3.21%). Maranoa remains the safest seat for any party in Australia.

Whether it indicated “generational change” is another matter; Littleproud is nine years younger than Joyce. Curiously, Joyce lived for many years in St George, which is situated in Littleproud’s seat of Maranoa.

Nevertheless, in terms of political style, Littleproud is quite different from Joyce. While Joyce goes out of his way to project a somewhat boisterous “bush” image, Littleproud is more relaxed and comfortable – and hence less confrontational – than Joyce.

What is more difficult to gauge is whether Littleproud’s leadership also represents a change in political substance. Given the Albanese government is in its infancy and so is Littleproud’s leadership of the Nationals, all we have to go by are general statements as he seeks to establish himself as leader. Of those statements, three are interesting.

Read more: With diesel $2 a litre and a new leader, the Nationals could pivot on climate to focus on energy independence

One is Littleproud’s strong declaration that the Coalition has to take its “medicine” following its election defeat. He also declared himself in favour of the idea of the “sensible centre”, a rhetorical term that has been around for some time and is evoked to prove that one is indeed sensible. This probably reflects nothing more than his desire for a new beginning.

The second is his general advocacy of nuclear power for the future, especially in the form of small-scale modular reactors, and his statement that popular attitudes to nuclear power have been shaped by Homer Simpson. Support for this mode of nuclear power also comes from new Liberal leader Peter Dutton.

This advocacy is essentially of the “we need to open a conversation about this”, which may be no more than floating a general idea to see how the public reacts. The problem with modular reactors, as Matt Canavan stated on Sky News, is the technology is still largely in development, although it is more developed than “green hydrogen”.

Canavan, a supporter of the nuclear conversation, also notes it could increase power costs. The problem with such “conversations” is they are vague and largely about a future that is some way off.

The third statement is about live sheep exports, something that is core business for Littleproud both in his role as shadow agriculture minister and as an advocate for rural interests. Littleproud strongly supports such exports, largely in terms of their economic benefit. This places him at odds with deputy Liberal leader Sussan Ley, who is opposed to such exports.

What this indicates is that Littleproud is perhaps most comfortable when supporting what he understands to be the interests of rural Australia.

Joyce also strongly supported live sheep exports, and he voiced his approval of nuclear power. It may be the case that in substance, if not in style, Littleproud has much in common with Joyce.

Littleproud may end up being more different from Barnaby Joyce in style rather than substance. Mick Tsikas/AAP

Of course, these are still early days. He might be a different style of leader to Joyce, but there are perennial matters for anyone who leads the National Party.

Given the uncertainties of Australia’s current economic situation, it is difficult to foresee how Littleproud’s policies will develop. One thing can safely be assumed: the National Party will continue to “look after” rural Australia to the best of its abilities.

This will surprise no-one. It is a sectional party and one should expect that when it changes leaders the style might change, but the focus of its activities and policies do not.