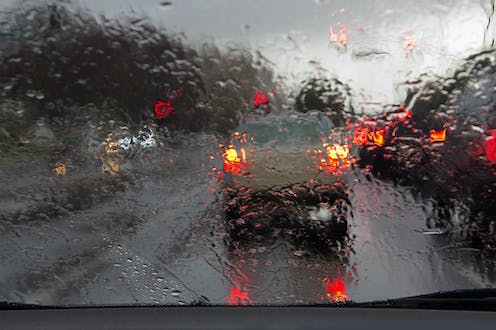 Driving in the rain can be demanding. It gets harder to see, sudden stopping is difficult, and rain can cause a car to lose grip when braking. Rain after a dry spell can cause grease and oil build-up on roads to become slippery.

Add in everyday distractions such as screaming kids in the back seat and it’s no wonder crash risk increases in the rain.

During rainy conditions, most drivers tend to decrease their speed, drive cautiously and reduce overtaking.

However, some driver cohorts – including male drivers – may be at higher risk of a crash during rainy weather.

Here’s what the research evidence tells us.

Rainfall often reduces visibility, increases stopping distance, and can cause a road vehicle to lose grip when braking. Shutterstock

Underestimating risk puts you in danger

In general, the research suggests most people drive more safely when it rains.

However, some underestimate the danger, which can increase risk.

Most studies on driving behaviour involve surveys, driving simulations or researchers monitoring drivers on roads for a certain period of time.

There is very limited research on the question of driver behaviour in the rain so sometimes a mixed picture emerges – depending on which study you are looking at or how it was conducted.

The research also noted that, when it comes to driving in the rain, married people are less likely than single people to drive fast or commit traffic offences. Women are less likely to express aggressive behaviours such as horn honking when driving in rainy weather.

But depending on which study you look at, you might get a different finding about younger drivers in the rain.

Another study, this time in the US, found middle aged or older drivers (as compared to young drivers) were actually more likely to drive slower than the speed limit when it rained.

This study’s findings suggests young people are more likely to speed, which increases the likelihood and the severity of a crash.

Rain makes it hard to see, and that increases crash risk. Some researchers report errors associated with the improper use of windshield wipers or demister during rain.

Some people underestimate danger when driving in the rain and this can lead to more risky behaviour. Shutterstock

These could include a lower speed limit during rain or signage warning people to think about how rain may change their driving behaviour.

We also need education for all drivers – but particularly driver cohorts that may be at higher relative risk, such as young male drivers – so people understand the risks around driving in bad weather.

Technology can help, too. Car manufacturers could promote driver support technology like adaptive cruise control, which regulates the speed of a car to keep it a safe distance from the car in front.

At the end of the day, all drivers should stick to the basics when driving in rain.

Reduce your speed, turn on your headlights and maintain a three to five second gap between you and the car ahead.

Make sure you accelerate and brake gradually (instead of suddenly) and focus your full attention on driving.