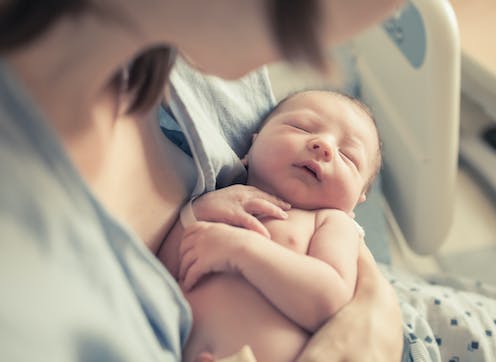 Most new Australian mothers receive government paid parental leave to support health, encourage workforce participation and balance work and family life equally with their partners. Despite this, Australia still has one of the least generous parental leave schemes in the developed world.

Both major parties propose to improve the paid parental leave scheme this election.

If you plan on having children, it’s worthwhile understanding what each party promises. Their policies may impact your health, income and the opportunity to pursue your career differently.

What are the major parties promising?

The Australian government provides working parents with paid leave at the minimum wage for up to 18 weeks. This scheme was introduced by Labor in 2011 and represented a “giant leap” in social policy, but it came quite late by OECD standards.

It has since been adjusted to provide partners with two weeks of leave and increase leave-taking flexibility.

This election, the Coalition promises to “enhance” the scheme, although it will keep the total leave amount shared between parents unchanged at 20 weeks. It will also leave payments fixed at the minimum wage.

Instead, the Coalition will allow parents to completely share this leave flexibly between them as they choose, with no separate amounts earmarked for mothers or “dads and partners”.

The Coalition will fix a design flaw in the income test by connecting scheme eligibility to household income, rather than individual income. It will also increase the income threshold that cuts off access at $350,000, allowing 2,200 more families to access the scheme.

Labor has a more generous plan, although they have not set an implementation date and have walked back making their policy a campaign promise. Its eventual goal is to increase total leave from 20 to 26 weeks to be shared between parents. It also seeks to pay benefits at a person’s full salary.

Labor aims to fund their proposed scheme from employer and government contributions. But their plan is scant on details, including how much this policy would cost, what proportion would be funded by business and government, and whether each parent will have leave earmarked for them.

A group that would be better off under either plan is single parents. They would be able to access more leave than the current 18 weeks available to them (Labor’s plan increases leave and the Coalition’s collapses leave for partners into the total leave entitlement).

Take-up of the current scheme is low among Australian fathers. Some economists have criticised the Coalition’s proposal to remove leave earmarked for fathers and partners, saying it would discourage them from taking any leave at all.

Read more: Is the budget good for women? The paid parental leave change takes us backwards and childcare costs were ignored

The argument is that if households want to maximise their income, lower paid parents (on average, mothers) would be the ones taking the entire 20 weeks’ leave, since it will be paid at the minimum wage. This means the Coalition’s plan may work against “promoting equality between men and women” in work and family life, despite offering more flexibility.

Parental leave schemes in other countries offering higher salary replacement are funded by a combination of government, employer and employee contributions.

This arrangement creates differences in leave-taking between parents who can also use employer-paid leave and those without this privilege. This is inequitable and may translate to differences in mothers’ health outcomes.

Read more: Paid parental leave needs an overhaul if governments want us to have 'one for the country'

Labor has not clarified the details of their proposed government/employer-funded approach. More details are needed on how their scheme would interact with existing employer-paid parental leave policies and whether it would help address existing inequities.

Labor’s plan better supports parent and child health (particularly for those without any employer-paid leave). Research has found six months’ leave after birth for mothers is optimal for their mental health, a minimum amount also suggested by the World Health Organisation for promoting breastfeeding and infant health.

Labor will get Australia’s scheme closer to this benchmark.

When fathers take leave, this is associated with better health outcomes for both mothers and fathers. It also supports children’s development.

The Coalition’s plan doesn’t increase leave from the currently low entitlement. It also only allows mothers to take more leave at the expense of fathers (and vice versa), which may compromise health.

Parental leave policies have to offer women enough time with their baby to promote good health, but not too much time they lose contact with the workforce. Shutterstock

Overly short leave increases the risk of women exiting the labour force, while overly long leave (more than one year) can result in women losing valuable skills and weaken workforce attachment. (Although neither party’s plan is anywhere near generous enough to create this issue).

The current scheme includes six weeks’ paid leave that can be used flexibly between parents any time over the first two years after birth, including while working part-time. This feature potentially supports skill retention and employment attachment, and is probably what the Coalition had in mind when proposing complete flexibility in leave-taking.

Labor’s plan provides a health-promoting boost to leave, while the Coalition’s recognises the value of flexibility in supporting women’s work. Both plans are lacking in execution; Labor’s on details and the Coalition’s on policy design that promotes equality in leave-taking and caring.

Both parties should consider providing longer and equally split leave for each parent with an additional “flexible” component, or rewarding “bonus” leave to parents who share leave more equally.

Australia has one of the most highly educated and skilled working age female workforces in the OECD. Sadly, this still isn’t reflected in women’s workforce participation, with women more likely than men to work part-time, be under-represented in most industries and earn less.

Policy design matters, but broader changes are needed to draw on this “productivity gold”. This includes promoting high-quality flexible work and normalising fathers taking extended leave to care for children.

Update: this piece was amended to update the fact on Thursday 12 May 2022, Labor Leader Anthony Albanese stated the Labor party is no longer taking its 26 week paid parental leave policy to the election (although it remains a stated “goal” within Labor’s national policy platform).