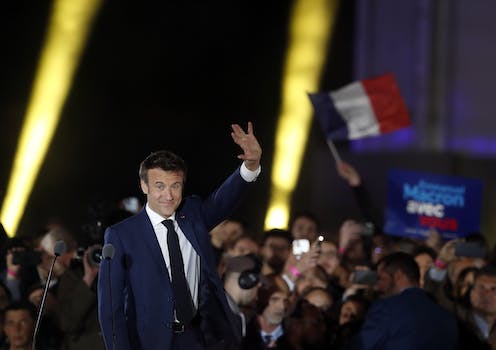 Emmanuel Macron has been reelected as President of the Republic of France for a second five-year term.

He defeated far-right candidate Marine Le Pen in the second round of the presidential election only hours ago, winning about 58.8% of the votes against 41.2% for his opponent. While votes are still being counted, about...

Emmanuel Macron has been reelected as President of the Republic of France for a second five-year term.

He defeated far-right candidate Marine Le Pen in the second round of the presidential election only hours ago, winning about 58.8% of the votes against 41.2% for his opponent. While votes are still being counted, about 30% of the French electorate did not vote. This is perhaps the highest abstention rate at a presidential election since 1969.

While most political watchers were expecting a narrower Macron victory, many in France were genuinely scared by the lack of nationwide mass demonstration against Le Pen and the far right ahead of Sunday’s vote. The possibility of having Le Pen elected was higher than ever before.

What are the key consequences of Macron’s reelection for both France and Europe?

Providing Macron’s party La République en Marche! can win the lower house election in June – which it is predicted to do – the first major outcome of this election is continuity.

For now, France remains a stable, moderate, “steady-as-she-goes” nation with inclusive values. No major change in policies is expected under Macron.

And this, paradoxically enough, might become a major issue because the 2022 results have clearly shown the French are seeking radical changes and want their concerns to be addressed. Rising costs of living, inflation, low salaries, the environment, law and order, and immigration have all been burning issues during the campaign.

As opposed to the 2017 presidential election, when most voters still supported traditional mainstream parties, this year, the majority of those who voted did so for parties promoting radical measures from both the far left and the far right.

Never before in the history of France’s Fifth Republic had those extremist parties totalled more votes than the moderate parties of the left, the centre and the right.

This means that despite being re-elected somewhat as a result of the French “winner takes it all” voting system, Macron has a real challenge if he does not want to face major social unrest, as was the case in 2018-19 with the violent Yellow Vests movement.

Read more: As protests roil France, Macron faces a wicked problem — and it could lead to his downfall

More work ahead for the French

While Macron endlessly repeats he is neither from the left nor from the right, his election campaign’s economic program was preferred by France’s major employers’ federation, the MEDEF.

For instance, in the coming months, Macron once again wants to reform France’s generous pensions system to make the French work longer, so that the existing retirement scheme can endure.

He would also like to propose some conditions for the two million French people who are on the lowest possible social aid scheme, so they perform 15 to 20 hours of work or training in exchange of the money they receive.

The returning president has also pledged to continue attracting foreign investment through the “choose France” program, while supporting start-ups.

But social protections to continue

But Macron also wants to make social benefits easier to access. Instead of having to apply for a particular scheme, eligible benefits would be paid straight into a person’s bank account.

A woman pushes her bike past campaign posters in Versailles ahead of the final vote. Michael Euler/AP/AAP

Given the complexity of social aid schemes in France, it is estimated that hundreds of thousands of people who struggle applying for support would be better off under Macron’s new proposal.

To gather the support of the Greens electorate, Macron has also pledged to continue subsidising nation-wide insulation programs, renovate 700,000 homes, protect biodiversity and legislate for a greener farming industry. This is an ambitious program in comparison to a first term that delivered mixed results on green policies and climate change.

Macron has also promised to extend the operational life of most nuclear powerplants and to get started on the construction of six new generation nuclear powerplants. In France, most citizens consider nuclear power as a green energy, given the minimal carbon emissions it generates.

This also provides the country with a higher level of energy (and therefore diplomatic) independence than its European neighbors.

What does Macron mean for the European Union?

The re-election of Macron is a blessing for Brussels and European institutions. With Brexit and the departure of German Chancellor Angela Merkel, France is playing an even greater role in European affairs and Paris has the opportunity to breathe new life into the EU.

This, of course, is a defeat for Putin, who tried to intervene in the 2017 Presidential election. Le Pen had close ties to the Russian regime for many years, although she tried to brush them off during the campaign.

Macron is a dedicated European and wants to build a stronger and more independent Europe. Russia’s invasion of Ukrainian has certainly provided a wake-up call for European leaders.

Previously, many relied on the United States to ensure European defence, while others looked to Moscow for cooperation, or to the French for peacekeeping operations.

That landscape is radically shifting now, and France’s traditional approach to ultimate sovereignty in defence (as the only European country with second strike capability) suddenly looks quite attractive to other European states.

Macron, and other European leaders gathered at Versailles for summit on the war in Ukraine in March. Ludovic Marin/AP/AAP

High on Macron’s agenda for Europe is greater cooperation between EU states. He wants to ensure Europe’s “strategic autonomy”, be it military, energetic, economic and political.

This will please neither Moscow nor Beijing. It may, however, offer breathing space to Washington who desperately wants to focus on the Pacific.

Macron’s European ambitions are likely to be supported by the Baltic states who fear for their existence, by Eastern European countries who now understand that anything can happen with Putin, and even by the Germans who are radically rethinking their previously timid foreign policy.

The next five years are going to be Macron’s hardest term, be it in the national or international spheres. To succeed he will need to keep radical parties at bay in France, accelerate measures on climate change, and steer the European Union toward a stronger, more independent future.