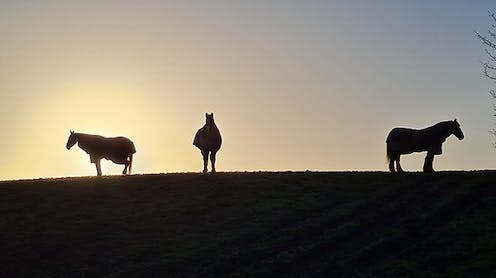 Turin, once briefly the capital of Italy, is famous today for its coffee, delectable hazelnut chocolate, Fiat cars, Juventus FC and the architectural wonder, the Mole Antonelliana. It also happens to be the city of a reportedly epiphanic moment in the life of multi-faceted German philosopher Friedrich Nietzsche.

On January 3 1889, Nietzsche left the home of his hosts in the Italian city to witness a scene which irreversibly influenced him: a horse being brutally whipped by the driver of a carriage. Nietzsche, in a fit of tearfulness, threw himself onto the horse’s neck to defend it from the blows.

This incident, an evidential aporia, hovers between legend and reality. Its disputed status has not, however, prevented historians, biographers, filmmakers and writers attaching momentous significance to the event.

Recall The Turin Horse (2011) by Hungarian filmmaker Béla Tarr, or Milan Kundera’s The Unbearable Lightness of Being (1984). The event has become a moment of originary trauma in the story of Nietzsche’s life, marking the beginning of a descent into madness which would last 11 years until his death in 1900. Turin: Approaching Animals by poet, novelist, short fiction writer and essayist David Brooks takes the Turin horse incident as its reflective starting point. In the opening chapter, the author ruminates: What matters … is what Nietzsche said to the horse. Or perhaps just the act of saying itself: the saying and, afterward, the silence. Why, we may well ask, does empathy and grief for an animal victim of human brutality explain Nietzsche’s descent into coma and madness? On the contrary, Brooks asks, might not this story be read as marking “the onset of a kind of deep sanity”? Just as a horse bookends the sane and insane periods of Nietzsche’s life, the Turin horse rounds out Brooks’s beautifully written and profound series of provocative meditations on human and nonhuman animal relations.

Friederich Nietzsche - Edvard Munch (1906) Public domain In contrast to the book’s opening section, the final section, simply entitled “Horse”, asks not what Nietzsche said, but “what the horse said to Nietzsche”. Echoing Wittgenstein’s infamous question about whether we could understand a lion if he or she could speak, the question becomes: if the horse could speak in a human language, what might she or he have said to the German philosopher? What, Brooks asks, if nothing was said but something was exposed, “like the force and intensity of another animal’s being” or “a profound guilt-in-oneself on realising our complicity in the (ab)use of and mindless cruelty toward that other”? This thought experiment about what would happen, for better or worse, if we understood what animals were saying points to an ongoing challenge for scholars and writers working at the intersection of animal studies and literary analysis: how to think about animals as animals, rather than as symbols or metaphors to explain primarily human concerns. Read more: Bias, politics and protests: how human laws constrain and sometimes liberate animals Questioning human exceptionalism In this vein of engaged, provocative questioning of human exceptionalism, Turin builds on Brooks’s previous writings about animals, including Animal Dreams (2021), Derrida’s Breakfast (2016) and The Grass Library (2019). The author declares in parentheses that Turin is not a book about Nietzsche. Yet Nietzsche, the author’s “rescued” sheep, and the operations of language – about which both Nietzsche and Brooks have quite a lot to say – become recurrent points of reference in the 42 sections that make up this compellingly readable book. Turin is not, strictly speaking, a philosophical treatise, scholarly monograph, or even a qualitative auto-ethnography. Rather, Brooks bends genres to consider some of the most pressing philosophical and applied ethical questions about human relations to other species: language and power, attitudinal conundrums about animal sentience, veganism, welfarism versus abolitionism, animal rescue, the horrors of the animal-industrial complex, the madness of individualism, kangaroo culling, fencing in animals, collateral damage in sustainable gardening, and the reason-emotion binary as grounds of judgement in animal advocacy. Drawing on a wide range of thinkers and writers – including Peter Singer, Maurice Blanchot, Martin Heidegger, Melanie Joy, René Maria Rilke, W.B. Yeats and Wallace Stevens, among others – Brooks complicates the tropes, arguments and myths that underpin so much philosophically inclined discourse in animal studies.

Jacques Derrida - Arturo Espinosa Seguir (2013) Wikimedia commons Can we speak of “a gaze of the ear”? A “gaze of the nose”? What of the cognitive dissonance evidenced in the life and work of a philosopher like Jacques Derrida, whose carnism sits oddly with a slim but influential series of discourses that led to his nomination, in the early 21st century, as forefather of the interdisciplinary theoretical project of post-humanism? As such, Brooks, ever an accomplished literary stylist, has produced an engaging, and deeply felt book that takes us, as it must given its subject, to some dark places: “holes, pockets of radical and potential incompatibility”. Thinking, feeling, style Turin may not be primarily about Nietzsche, but as a theorist of the embodiment of ideas and their inextricable relation to the physical and social, Nietzsche had some very specific instructions about literary style. His beloved correspondent, the Russian-born psychoanalyst, author and essayist Lou Salomé, documented them in her biography of Nietzsche. The ten commandments of style contained in “Toward the Teaching of Style” (1882) recommended, among other things, that a style ought to prove that one believes in an idea; not only that one thinks it but also feels it … One must learn to feel everything – the length and retarding of sentences, interpunctuations, the choice of words, the pausing, the sequence of arguments – like gestures. Turin is the work of a fine writer and poet who knows how to craft sentences that live, affective vignettes that gesture not only towards the horrendous, inconceivable suffering experienced by animals, but towards alternative realities. Everywhere in this book we find examples of how literary ways of seeing, hearing, thinking and writing can free us to envision how human and non-human relations might be, could be, different. Read more: In an Australian first, the ACT may legally recognise animals' feelings Writing for, not just about animals This brings me to the subtitle: “Approaching Animals”.

David Brooks. Brandl & Schlesinger As a present participle, in the present continuous (present progressive) tense, “approaching” suggests an action or condition that is happening now, frequently, and may be ongoing. Used as a verb or an adverb, it can refer to the idea of advancing or moving towards, drawing close to something or someone, or the idea of an impending, oncoming, pending, proximate event. It excludes the idea of attaining, closing down, concluding. Turin is in this manner speculative, part of an ongoing conversation that approaches some of the more difficult questions about human attitudes towards nonhuman animals, while remaining respectful towards its primary subject: animals of all species. The book appropriately, therefore, proceeds as a series of conditional wonderings, approximations, tentative expositions and provocations that resist closure. It is informed by an acute recognition that the writer and his readers are language creatures looking out of a human bubble – “the prison house of language”, to appropriate a Nietzschean phrase. That some sections end with ellipses says it all: we may not have definitive answers to our questions about animals, but what matters is to drop our anthropocentric habit of condescension and to “keep thinking”. Although it is short, I could not read Turin at one sitting. I felt impelled to pause and think about the questions raised in the vignettes, whether about mental states of particular animals – if animals are self-aware, meta-cognisant, capable of emotion or of caring about others of their kind – or about how I might answer rationalist objections to ethical veganism. Once read, though, Turin is a book that can be dipped into anywhere and appreciated anytime for its stunning prose in which ethics, rhetoric and aesthetic expression merge: a bit like Nietzsche on a good day, maybe. Authors: Jennifer Ann McDonell, Associate professor, University of New England