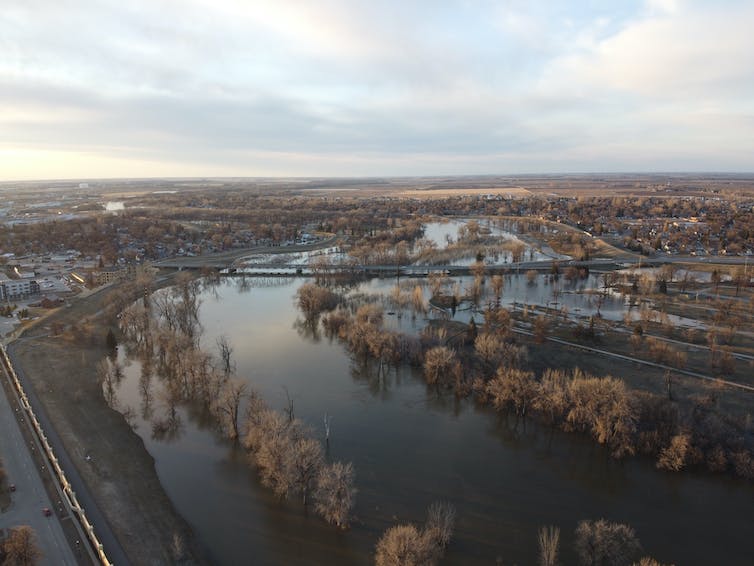 For some suburbs built on the flood plains of the Nepean River in western Sydney, for example, these floods are their third in two years.

Flooding is a part of life in parts of Australia. But as climate change intensifies the frequency and severity of floods, fires and other disasters, and recovery costs soar, two big questions arise.

As a society, should we be setting up individuals and families for ruin by allowing them to build back in areas where they can’t afford insurance? And is it fair for taxpayers to carry the huge burden of paying for future rescue and relief costs?

Read more: After the floods comes underinsurance: we need a better plan

Doing something about escalating disaster risks require multiple responses. One is making insurance as cheap as possible. Another is investing in mitigation infrastructure, such as flood levees. Yet another is about making buildings more disaster-resistant.

The most controversial response is the policy of “managed retreat” – abandoning buildings in high-risk areas.

In Australia this policy has been mostly discussed as something to consider some time in the future, and mostly for coastal communities, for homes that can’t be saved from rising sea levels and storm surges.

But managed retreat may also be better than the chaotic consequences of letting the market alone try to work out the risks to individuals and communities.

The strategy is already being implemented in parts of western Europe and North America. An example from Canada is the town of Grand Forks, a community of about 4,000 people 300 kilometres east of Vancouver.

The town is located where two rivers meet. In May 2018 it experienced its worst flooding in seven decades, after days of extreme rain attributed to higher than normal winter snowfall melting quickly in hotter spring temperatures. Deforestation has been blamed for exacerbating the flood.

The flood damaged about 500 buildings in Grand Forks, with lowest-income neighbourhoods in low-lying areas the worst-affected.

In the aftermath the local council received C$53 million from the federal and provincial governments for flood mitigation. This included work to reinforce river banks and build dikes. About a quarter of the money was allocated to acquire about 80 homes in the most flood-prone areas.

The decision to demolish these homes – about 5% of the town’s housing – and return the area to flood plain has been contentious.

Some residents simply didn’t want to sell. Adding to the pain was owners being paid the post-flood market value of their homes (saving the council about C$6 million). There were also long delays, with residents stuck in limbo for more than year while authorities finalised transactions.

Lismore is also built on a flood plain where two rivers meet. Floods are a regular occurrence, with the last major disaster being in 2017. Insuring properties in town’s most flood-prone areas was already unaffordable for some. In the future it may be impossible.

Last week NSW premier Dominic Perrottet said about 2,000 of the town’s 19,000 homes would need to be demolished and rebuilt, a statement the local council general manager downplayed, saying in the majority of cases “people will not have to worry”.

For a community traumatised by loss, overwhelmed by the recovery effort and angry at the perceived tardiness of government relief efforts, discussing any form of managed retreat is naturally emotionally charged.

But there’s never an ideal time to talk about bulldozing homes and relocating households.

Lismore residents Tim Fry and Zara Coronakes and son Ezekiel outside their home on March 11 2022. Jason O'Brien/AAP, CC BY

Managed retreat has far-reaching financial ramifications. As in Grand Forks, the first questions are what homes are targeted, who pays, and how much.

Some residents may be grateful to sell up and move to safe ground. Others may not, disputing the valuation offered or being reluctant to leave at any price.

Managed retreat policies also affect many more than just those whose homes are being acquired. Demolishing a block or suburb can push down values in neighbouring areas, due to fears these homes may be next. Those households are also customers for local businesses. Their loss can potentially send a town economy into decline.

No wonder many people want no mention of managed retreat in their communities.

Markets, however, are already starting to “price in” rising climate risks.

Insurance premiums are going up. The value of homes in high-risk areas will drop as buyers look elsewhere, particularly in the wake of increasingly frequent disasters.

The economic fallout, both for individual households and local communities, could be disastrous.

The Reserve Bank of Australia warned in September 2021 that climate-related disasters could rapidly drive house prices down, particularly in areas that have previously experienced rapid house price growth.

These disasters are also amplifying inequality, with poorer households more likely to live in high-risk locations and also to be uninsured.

In Lismore, for example, more than 80% of households flooded in 2017 were in the lowest 20% of incomes. These trends will intensify as growing climate risks translate into higher insurance premiums and lower house prices.

Read more: You can't talk about disaster risk reduction without talking about inequality

A deliberate strategy of managed retreat, though distressing and difficult, can help to minimise the upheaval in housing markets as climate risks become increasingly apparent.

We can do better than leaving the most socially and economically vulnerable households to live in high-risk areas, while those with enough money can move away to better, safer futures. Managed retreat can play a key role.