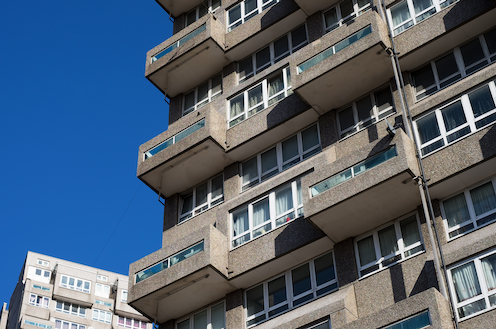 The centrepiece of Labor’s election program so far is its A$10 billion social housing policy, officially called the Housing Australia Future Fund.

Although needed, its a far short of the 100,000 extra social housing units we would have had if social housing been growing in line with total housing in recent years, a gap that is climbing by 4,000 homes a year.

And, like the frilled-neck lizard, the $10 billion looks much bigger than it is.

Labor could probably do what it has promised to do for $450 million per year.

Read more: The compelling case for a future fund for social housing

Instead, it says it would borrow $10 billion at low interest rates, invest the money for much higher returns, and use the proceeds to pay for the program.

If the fund earns 4.5% more than the cost of borrowing it’ll get the $450 million per year. Rather than use the money to build the houses it will use the money to fund service payments to community housing providers who build them.

As Labor points out, it’s a mechanism used by the current government, which has set up five such funds in addition to the Future Fund used to fund public service pensions (of which more later).

Extract from Labor's Housing Australia Future Fund election policy Two of these funds, the Medical Research Future Fund and the Disability Care Australia Fund are actually bigger than the proposed Housing Fund. A problem with this structure designed to make the commitment look bigger than it is is that spending on social housing will depend on the returns of the fund. Allocating money from one source to spending on one particular purpose is called hypothecation, a word closely related to “hypothetical”.

Medicare funding is independent of the levy. Dean Lewins/AAP The Medicare Levy of 2% of most taxable incomes is intended to be for funding Medicare, but funds only part of it. In contrast, there doesn’t appear to be any plan to guarantee payments for social housing if in any year the Social Housing Fund fails to make money. The bigger question is whether it makes sense for governments to use funds like the Future Fund to put money into income-generating investments in private companies (the Future Fund invests in Apple, Microsoft and the Commonwealth Bank) or to use any available funds to pay down government debt. The answer depends in part on whether the profits the funds earn are genuine or mere compensation for the risky business of investing in shares, which can always go wrong. My work on the so-called “equity premium”, the excess return for investing in shares, suggests that is genuine and exceeds what’s needed to compensate for risk, making investment in the stock market an appealing option for governments in the absence of better opportunities. But the premium is not limitless, for two reasons. One is that if governments borrow enough and buy enough shares, we can reasonably expected the government’s cost of borrowing to rise and the rate of return on shares to fall, reducing the equity premium. The other is that if buying shares is pursued far enough, governments will become major, or even majority, shareholders in large businesses, effectively becoming owners. Long experience suggests that while governments are quite good at running some types of businesses (especially those involving infrastructure and requiring large amounts of capital) they are not nearly as good at running others. Retailing comes to mind. If we accept that large debt-financed public investment can make sense, it follows that governments should own as much as 100% of some types of businesses (businesses such as Telstra come to mind) and little or none of others, such as shopping centres, which Australia’s government did indeed once own. Read more: People have lost faith in privatisation and it's easy to see why And that was generally the way Australia’s economy worked during the brief period of broadly shared-prosperity in the mid-20th century. Governments borrowed at low rates and invested in physical and social infrastructure, such as roads and communications services. The more funds there are like Labor’s proposed Housing Australia Future Fund the more likely it is we will get back there. Authors: John Quiggin, Professor, School of Economics, The University of Queensland