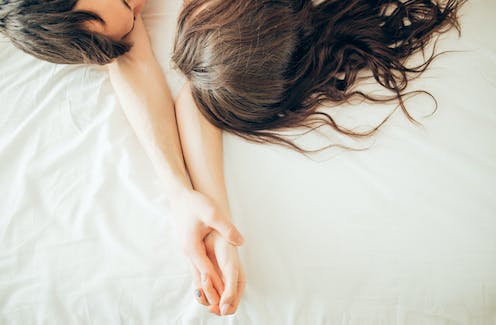 First published in 1972, The Joy of Sex styled itself as a sexual cookbook, with positions and predilections presented as loose recipes.

As any good cookbook author knows, however, sometimes people really need a picture to be able to get a sense of the finished dish. The success of the book owes much to its plentiful graphic sketches, as well as its playful and unanxious approach to sex (“unanxious” is a word the book’s author uses a lot).

Such was the popularity of the book (it has sold over 12 million copies worldwide and been translated into more than a dozen languages) that it became relatively commonplace for people to have it on their shelves or even coffee tables.

The book’s cover lists Alex Comfort, a physician, novelist and poet, as its editor. But rather than gently editing the sexual advice and escapades of a happily married couple, Comfort later revealed he had written the book himself, with the help of his long-time mistress (also his wife’s best friend and his subsequent wife). His private polaroids and descriptions of sexual positions served as the basis for many of the sketches in the book, along with photographs taken of colour illustrator Charles Raymond and his wife Edeltraud that Chris Foss used as references for his line drawings.

Today, this backstory of subterfuge and polaroiding adds to what is already a pretty unusual read. There is liberal talk of grope suits, the buttered bun, the goldfish, and railways (not what you think). At the time of publication, the book was revolutionary – perhaps not in its content, but in its popularity. It followed Alfred Kinsey’s books on sexual behaviour in men and women in the late 1940s and early 1950s.

By the early 1970s the sexual revolution was underway, and it is possible that the Joy of Sex both reflected an increased societal focus on sexual pleasure and worked to enhance it.

Read more: Pubic hair, nudism and the censor: the story of the photographic battle to depict the naked body

At its core, the book’s advice is pretty simple. Comfort urges the reader to be open minded about sex, to explore and experiment, and to communicate without judgement. Fifty years on, this is all still good advice.

Qualitative research (focused on themes rather than data) shows that many people see sexual satisfaction as reflecting sexual openness and a willingness to act out desires, as well as the more obvious benchmarks like orgasm and sexual frequency. People who really communicate with their partner about what turns them on (and what doesn’t) and who are ready to talk about the often embarrassing nitty gritty of sex, tend to report having better sex. They also report better relationships overall (perhaps in large part because of the better sex).

It’s not just the hair that’s outdated though

Today, there is a lot in the book that is dated, outmoded, or incorrect. Comfort appears fixated with sexual perfectionism. Although he dismisses some sexual myths (such as the inherent superiority of a “vaginal” versus “clitoral” orgasm) he does seem to believe most sexual encounters can (and perhaps should) be characterised by simultaneous orgasms. Subsequent research demonstrates that when we demand sexual perfectionism (in ourselves, or our partners) we tend to enjoy sex a lot less.

Goodreads The book is very strongly geared towards heterosexual cisgender sex – a modern reimagining of the book would need an enhanced focus on gender and sexual identity diversity, and the many ways we have sex. (Note there have been revised editions and spin-offs including The Joy of Gay Sex and The Joy of Lesbian Sex.) The advice in the orginal, however, around open and non-judgemental communication about sex and sexual needs feels relevant to everyone. And Comfort acknowledges there are groups of people for whom other books are needed. Although his language around these issues is awkward under today’s gaze, there is a broad acceptance of same-gender attractions (without citing any evidence Comfort happily claims everyone is bisexual) and aspects of gender fluidity. Read more: Netflix's Sex Education is doing sex education better than most schools There are still more aspects of the book that need revision or updating, but also delightful inclusions in the 1972 edition. There are the many unusual assumptions. When talking about male turn-ons (termed “releasers”), for example, Comfort confidently declares: A horse, seen from behind, is a male ‘releaser’ – it has long hair, big buttocks, and a teetering walk. A cow isn’t. In fact, there is a lot of talk of horses, horse symbolism, and riding play throughout the book. Comfort rails against deodorant and cautions lovers never to wear it. Elsewhere he helpfully warns: […] the only really disturbing manifestation of love music is when the woman laughs uncontrollably – some do. Don’t be uptight about this. Today’s scientific support for The Joy of Sex as a whole is mixed, and the book is dated, and cis-heterosexual and male-centred. But is it still joyful? Yes, it is. The central message – that sex can be a source of pleasure, love, communion, and play – remains as true today as it was in 1972. There are some good tips in there, too, if you can sort the horses from the cows. So excuse me, while I read up on the buttered bun. Read more: Has less sex in real life led to more raunch on our screens? Authors: Fiona Kate Barlow, Senior Research Fellow, The University of Queensland