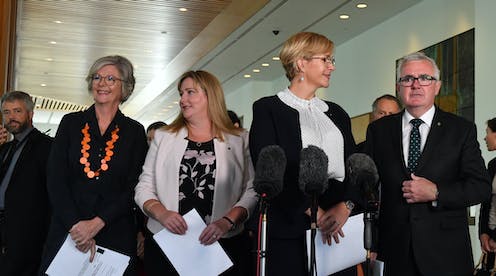 With the 2022 election promising to be close - the Morrison government has just a one-seat majority - could high-profile independents be a crucial factor in key seats?

Since the introduction of proportional representation for the Senate in 1949, we have become very accustomed to independents and minor parties being important players in the Senate. But what about the lower house?

How MPs get elected is important

The answer lies in the system used to elect candidates to the House of Representatives.

Proportional representation is good for minor parties and independents, but in the lower-house, our single-member electorates create and then reinforce two-party systems.

This is why, since 1910, the House of Representatives has been a two-party affair – and there is no reason to think this is fundamentally changing.

Nevertheless, it is quite possible the next parliament will be like the 16th and 43rd, where independent members played vital roles.

Read more: Farewell to 2021 in federal politics, the year of living in disappointment

The next election, in 1943, produced landslide wins in both houses for John Curtin’s Labor Party. The two independents who had played such a critical role in the 16th parliament retained their seats but became so unimportant they soon resigned.

The 43rd parliament was elected in August 2010. The prime ministers were Julia Gillard until June 2013, then Kevin Rudd until Labor’s defeat in September the same year.

The prime ministership was famously delivered to Gillard after independents Rob Oakeshott and Tony Windsor threw their support behind Labor.

The following election in September 2013 produced a landslide win in the House of Representatives election for Tony Abbott’s Liberal-National Coalition. The two independents – so critical in the 43rd parliament – did not seek election to the 44th.

The four key independent members - across the 16th and 43rd parliaments – represented conservative electorates, but put Labor prime ministers into office. That Coles, Wilson, Oakeshott and Windsor would become quite so important was not predicted, because neither the 16th nor the 43rd were forecast to be “hung”.

What about the 47th parliament?

This is where the present situation is so different. There is genuine talk of a hung parliament.

However, I still think Labor will likely win outright next year – essentially because Prime Minister Scott Morrison does not “get it” on women, climate change and integrity issues. If that is correct, then none of the independents will be of special importance.

Read more: Is Morrison gaining a reputation for untrustworthiness? The answer could have serious implications for the election

However, I do think it is sensible to speculate on two possible alternative results, based on my reading of individual seats.

At the May 2019 election, the Coalition won 77 seats, Labor 68, independents 5 and the Greens winning the single seat of Melbourne.

One possible scenario in 2022 sees the Coalition winning 72 seats, Labor 71, the Greens two, and independents six. In that hung parliament, I would expect Morrison to remain prime minister.

A second possible scenario sees Labor winning 72 seats, the Coalition 71, the Greens two, and independents six. In that hung parliament, I would expect Labor leader Anthony Albanese to replace Morrison as prime minister.

So, who would be these six independents?

Two other key contests are difficult to predict.

Helen Haines is also hoping to be re-elected in Indi. However, there were only 2,816 votes between her and the Liberal candidate in 2019, and we are yet to know who her Liberal competitor is in 2022.

In Wentworth, Dave Sharma, the Liberal winner, was only 2,346 ahead of defeated independent Kerryn Phelps. In 2022, Spender - who is well-connected and enjoys a high profile in the community - is trying to unseat Sharma.

Bearing in mind 100,956 formal votes were cast in Indi and 89,754 in Wentworth, these seats are only held by very small majorities.

In 2019, the contests in those seats were between Liberal and Labor candidates, so this makes these contests very difficult to predict.

As we approach an election year, a sensible, educated guess is there will be about six (or at most seven) independents elected, in Clark, Kennedy, Mayo and Warringah, plus two or three others out of the seats identified above.

This will of course matter to the composition of the 47th parliament, but I don’t think we are seeing a new phenomenon.

If the 47th parliament is hung, then history tells us the election for a 48th is likely to deliver a clear result to one side or the other. And the electoral system for the lower house means the two-party system is not going anywhere.