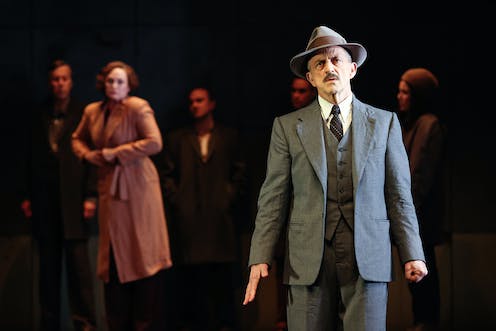 Director Paige Rattray has made an interesting choice in the opening moments of Sydney Theatre Company’s new production of Arthur Miller’s Death of a Salesman. She provides us with a narrator (Brigid Zengeni) who directly addresses the audience...

Director Paige Rattray has made an interesting choice in the opening moments of Sydney Theatre Company’s new production of Arthur Miller’s Death of a Salesman. She provides us with a narrator (Brigid Zengeni) who directly addresses the audience with a kind of “voiceover” derived from Miller’s wonderful original stage directions.

This is an impactful decision, as it overlays the set with the dream-like visions of reality with which the play is so much concerned. David Fleischer’s well-executed set design provides us with an enormous, echoing school assembly hall that is well past its sell-by date. This empty space is the screen against which the Loman family’s faded hopes of schoolboy success are projected, and where they have come to die.

The most telling sentence from Miller’s opening stage directions describes the house in which the Lomans live: “An air of the dream clings to the place, a dream rising out of reality”. This elusive instruction from Miller is a tough brief for any set designer. But it is succinctly evocative of the terrible prison into which the Loman family have slowly drifted, a prison constructed out of ill-founded hopes and a cruelly competitive world.

Perhaps unusually, the stage directions for Death of a Salesman are fascinating in their own right. So it is an unexpected pleasure of this production to have them foregrounded and made use of in this way.

Working in the middle of the 20th century, Miller’s plays arrive towards the exhausted end of a long tradition of realist dramatic writing in which stage directions had increasingly dominated the page, with the dialogue sometimes seeming to take a backseat. From Ibsen’s work in the late 19th century onwards, playwrights tried to ensure that the worlds they presented on the modern stage were as fully realised as possible.

For Miller, the promise of realism had frayed alongside American expectations of 20th century prosperity. Sydney Theatre Company/Prudence Upton

But for Miller (as for his mid-century American contemporary, Tennessee Williams) the promise of realism had frayed alongside American expectations of 20th century prosperity.

The worlds that they both create through increasingly complex and demanding stage directions are worlds in which dreams clash with reality, worlds that neither we nor their protagonists are quite able to grasp.

Attention must be paid

Willy Loman, the 63-year-old travelling salesman of the play’s title, is never able to live in the present. His past keeps walking through the door. He is exhausted, “tired to the death”, unable to escape the memories that keep him trapped, hoping for success that has never – will never – come true.

Rattray and Fleischer, with the aid of Clemence Williams’ powerful score, make great use of the deep Roslyn Packer stage to bring this increasingly nightmarish experience to life.

The play centres on the four members of the Loman nuclear family. Jacek Koman captures Willy’s mercurial temperament, particularly the dangerously rapid shifts in his temperament: manic optimism, frustration at a world that has disappointed him, and foolish nostalgia.

Helen Thomson’s portrayal of Linda Loman, his wife, is the standout performance of the production. Thomson has found a pathos and a strength to the role that is not always realised in performance.

Linda Loman’s defiant defence of her husband, despite all his flaws, is the moral centre of the play. “He’s a human being”, she tells her sons, “and a terrible thing is happening to him. So attention must be paid.” Linda’s claims are the claims of the play: that an ordinary man’s suffering is worth something beyond its dollar value. At the very least, his life is worth having a play written about it. Thomson’s superb performance holds this heart of the play for us.

Callan Colley as the younger son, Hap Loman, does a great job of living up to another of Miller’s demanding stage directions. “Sexuality,” we are told, “is like a visible colour on him, or a scent that many people have discovered.”

Josh McConville’s performance of Biff, older brother and a faded high school jock, is the other stand out. His awareness that he can’t live up to his father’s dream that he will turn high school adulation into ever-increasing success provides the key journey of the play’s narrative, and McConville’s typically physical performance captures well Biff’s frustrations.

The director’s decisions here – to use the narrator, to ask the cast to use American accents, and also to populate the stage with extraneous cast members – are all carefully considered. They all point towards the theatrical nature of the experience.

Her choices provide us with the sense that, even though it is set in the kitchen of an ordinary house, what we are watching is not a slice of realism at all. Rather, it is an understanding of our lives as hemmed in by – controlled by – dreams and delusions.

Death of a Salesman plays at the Roslyn Packer Theatre until December 22.