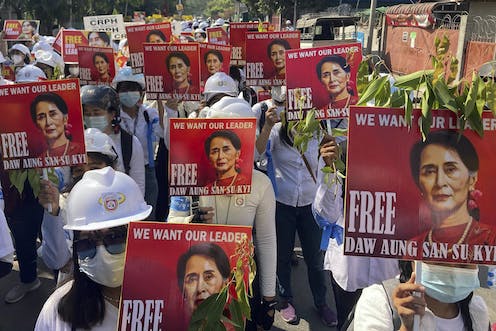 On Tuesday the judge in a show trial of Myanmar’s 76-year-old Aung San Suu Kyi delayed the verdict in the first ruling on 11 charges that could result in cumulative sentences of 102 years in jail.

As this theatre played out in a courtroom in Myanmar’s capital, the Association of Southeast Asian Nations (ASEAN) consolidated a gradual, but tectonic, shift in its long-held policy of noninterference in member states’ internal affairs.

The Myanmar military arrested Suu Kyi and the president in a coup in February this year. It then prosecuted them under bogus criminal charges and replaced the elected government with a military junta.

ASEAN’s history and constitutional documents suggested its response to the coup would likely be muted impartiality. However, recent events have demonstrated significant changes are afoot.

For the first time in its 54-year existence, some ASEAN member states are vocally opposing a military coup within the bloc. The result is increasing international isolation for the Myanmar junta and its leader, Senior General Min Aung Hlaing.

The governments of Indonesia, Brunei, Malaysia and Singapore joined Myanmar’s civil disobedience movement in successfully opposing the junta’s attendance at the summit, despite diplomatic lobbying by China.

The following day, the Myanmar representative attending an ASEAN climate and disaster conference was a minister of the national unity government – the government in exile, not the military junta.

While this event did not have the prominence of the leaders’ summits, it was hugely significant. A national unity government minister was invited to a formal ASEAN conference for the first time. It was a sign of growing frustration with the military’s brutality and intransigence.

This was the second time in a month that ASEAN had snubbed the military. The first was when Min Aung Hlaing was disinvited to a series of ASEAN-related summits in October, including one with US President Joe Biden. That decision was similarly pushed by the more progressive quartet of ASEAN – Indonesia, Malaysia, Singapore and Philippines – and supported by the ASEAN chair, Brunei.

The ASEAN-China Special Summit began without a representative from Myanmar. An Khoun SamAun/National Television of Cambodia/AP/AAP

The Myanmar military argued “foreign intervention” by the US and Europe caused the ASEAN rejection in October. It also claimed the decision to exclude junta representatives “was against the objectives of ASEAN, the ASEAN Charter and its principles”.

The junta was referring to principles of the charter, which came into force in 2008, on “non-interference in the internal affairs of ASEAN Member States” and “respect for the right of every Member State to lead its national existence free from external interference, subversion and coercion”.

This principle of non-interference was also implicit in the Bangkok Declaration that created ASEAN in 1967.

However, another principle in the ASEAN charter is “adherence to the rule of law, good governance, the principles of democracy and constitutional government”. The military plainly breached all elements of this principle by removing a democratic government via a coup. This government had been elected in a landslide only a few months earlier.

The junta’s claims of ASEAN breaching the charter therefore looked rather thin and hypocritical, having clearly violated it to begin with.

The military junta complains of breaches of ASEAN’s Charter, but it breached it violently in overthrowing a democratically elected government. Maung Nyan/EPA/AAP

A changing idea of intervention

The deepening humanitarian crisis in Myanmar has pushed some ASEAN member states to question the relevance of its principle of “non-interference” in other states’ affairs.

In October, the Malaysian foreign minister raised the previously unthinkable topic by suggesting ASEAN needed to do some “soul searching” on the non-interference policy. He argued it had contributed to ASEAN’s inability to make effective decisions quickly.

Read more: Two governments claim to run Myanmar. So, who gets the country's seat at the UN?

Decisions in ASEAN are made by consensus. In the past, this has stopped the organisation from taking difficult decisions. However, more progressive member states are now using the need for consensus to avoid the embarrassing optics of Min Aung Hlaing joining regional leaders in virtual meetings.

But this consensus decision-making will also make it difficult for ASEAN to formally recognise the national unity government, since member states such as Vietnam, Laos and Thailand have tended to back the military.

Myanmar’s seat at ASEAN leaders’ meetings is therefore likely to remain empty while some states oppose the junta’s participation. Having crossed the Rubicon by vocally rebuffing the military, domestic political pressures may well prevent the more progressive states from reversing their position.

Indeed, in the high-level Asia-Europe Meeting hosted by Cambodia last Thursday, Myanmar’s seat was empty once again. The meeting’s strongly worded final statement indicated impatience with the regime, calling for “the early release of all those arbitrarily detained” and a “return to the path of democratic transition”.

This ongoing diplomatic thrashing would likely be an unpleasant surprise for Myanmar’s military. Its leaders would have expected ASEAN’s acquiescence once they seized the levers of power.

The need to avoid providing a new lightning rod for unrest at home and internationally likely precipitated the postponement of the verdict in Suu Kyi’s trial.

The military may well have anticipated the burgeoning court cases would provide a straightforward path for the political silencing of Suu Kyi. It is now becoming increasingly clear the quashing of these charges will be the only bargaining chip the military has to return to ASEAN’s table.