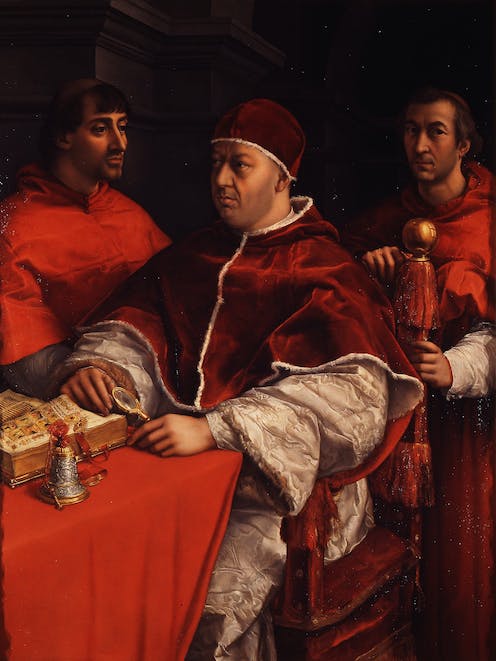 Giovanni di Lorenzo de’ Medici, who died 500 years ago today, has a claim to be one of the most miscast popes of all time.

Perhaps the youngest pontiff of the last thousand years, he was the last non-priest to be elected as pope – and he remains the only pope to have kept a pet elephant.

Giovanni’s reign as Leo X (1513-21) marked the highest point of the Renaissance’s flowering in Rome. However, it also saw the birth of the Reformation, the greatest rupture in Christianity since the East-West Schism of 1054.

History has not always been kind to Leo. Protestant divines railed against his decadence and corruption. Catholic scholars drew attention to his patronage of supreme artistic accomplishments yet still lamented his fecklessness in not anticipating the import of what was going on around him.

Read more: 'A promiscuous she-pope with a dilated cervix': the legend of Pope Joan, who gave birth on a horse

Born on December 11 1475, like many second sons of the elite, Giovanni was destined for a career in the Church. And they made clerics young in Renaissance Italy: he went to Rome to be a cardinal aged just 13.

Yet Giovanni’s first decades at the papal court were quiet ones. His family lost power in Florence at the start of the Italian Wars in 1494, which diminished his clout. Only in 1512, when the Medici regime was restored, did his star rise.

An engraved portrait of Pope Leo X, from between 1615–75. Metropolitan Museum of Art

A valued lieutenant to Julius II – the Warrior Pope who drove French armies out of Italy – Giovanni was rewarded in the papal election that followed Julius’ death in 1513.

Maybe out of sympathy for his discomfort, or perhaps because they thought his ailments precluded a long pontificate, the other cardinals surprised many by voting for him.

His unlikely candidacy carried the day.

As pope, Leo X was an enigmatic figure. Full of outward generosity and congenial friendliness, he loved music and is notable for his role in building up the papal choir. But Leo could also be vain, capricious and cruel.

In 1517, he sentenced a 26-year-old cardinal, Alfonso Petrucci, to death on spurious charges. The case shocked because it had no real precedent and the Petrucci were Medici rivals in Tuscan politics, not Catholicism’s religious opponents.

Leo read voraciously and could take a joke about himself. When the satirist Pietro Aretino mocked him mercilessly, both for his excessive love of luxury and for his improper sexual tastes, Leo rewarded him.

Leo took a particular interest in a 16-year-old boy, Marcantonio Flaminio, whom he tried to shower with gifts (the boy’s father would have none of it). But Leo was not so diligent with his liturgical duties. Why should he have been, when he had not yet been consecrated as a priest, let alone bishop, when he became pope?

His rise through the Church’s ranks – rushed through in just a few days in the lead up to his coronation – remains one of the fastest in history and attests to the very different mores of the age.

Besides being the first pope to kill a cardinal, Leo is also renowned for his pet elephant Hanno.

A gift from King Manuel I of Portugal, Hanno lived in an enclosure in the Vatican’s Belvedere courtyard from 1514. Leo commissioned art and poems to celebrate their friendship:

In the Belvedere before the great PastorWas conducted the trained elephantDancing with such grace and such loveThat hardly better would a man have danced:And then with its trunk such a great noiseIt made, that the entire place was deafened:And stretching itself on the ground to kneelIt then straightened up in reverence to the Pope,And to his entourage.

Hanno died aged seven, after being fed a laxative mixed with gold. Leo was distraught. He buried Hanno in the Vatican and personally composed an epitaph for his tomb.

Hanno did not live to see what historians now see as the most significant event of Leo’s papal reign: the day in October 1517 when an obscure German friar called Martin Luther appended his Ninety-Five Theses to a church door in Wittenberg.

This woodcut shows Luther writing his theses on the door of the church. His quill pierces the head of the lion, here representing Leo X. Staatliche Museen zu Berlin, Kupferstichkabinett

Leo was an early target of Luther’s criticisms. He was the one who had given permission for the sale of so-called “indulgences” which Luther targeted. These financial instruments were claimed to give those who purchased them remission from doing time in Purgatory to atone for their sins.

Leo responded cautiously to Luther at first, encouraging debate. Yet he lost patience and excommunicated Luther on January 3 1521. By then, Luther had branded Leo as the Antichrist.

Read more: Revisiting the Reformation: how passions sparked a religious revolution 500 years ago

Luther never succeeded in persuading all Christian Europe to abandon its support for the papacy, but nor did Leo’s successors contain the movement he created. For many, Luther’s teachings became a spiritual equivalent to the laxative which Leo had so unwisely fed to Hanno. They purged the Church of adulterations which they came to feel Leo himself embodied.

For Catholics, Leo’s reign has come to be understood as a turning point when the papacy’s worldly predicaments reached their unfortunate crescendo.

Half a millennium on, Leo’s story, a giddy tale of ostentation, hubris, intrigue, and superfluous vice, still entertains – not least because it reminds us ecclesiastical oddities and papal scandals are nothing new.

We should remember Leo as a man who bore witness to, and helped shape, key developments in European History. He was also an unusually emblematic figure for a rich Renaissance culture whose legacies still resonate around us today.