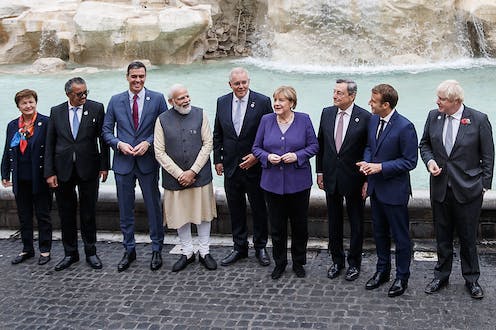 The G20 summit in Rome concluded over the weekend with a disappointing outcome for Earth’s climate.

Leaders of the world’s wealthiest countries, including Australia’s Prime Minister Scott Morrison, failed to reach a commitment to phase out fossil fuels. And the meeting’s final communique did not include a commitment to achieving net-zero carbon emissions by 2050.

But breakthrough leadership on climate change was missing. This outcome does not bode well for the Glasgow talks – the world’s last hope for keeping the 1.5℃ global warming limit within reach.

G20 leaders, including Australia’s Scott Morrison and the UK’s Boris Johnson, failed to reach a commitment to phase out fossil fuels. AP

No timeline for coal exit

The G20 meeting was seen as a crucial precursor to the COP26 negotiations. But while world leaders agreed substantial action was needed to stay within 1.5℃ of global warming, they made few real commitments to meeting that target.

Morrison was under pressure going into the G20, after US President Joe Biden on Saturday described Australia’s handling of the cancelled French submarine deal as “clumsy”. And in the months leading to the talks, both the US and United Kingdom had called on Australia to up its climate ambition.

Days before leaving to attend the summit, Morrison struck a deal with the Nationals for Australia to adopt a target of net-zero emissions by 2050.

The Rome talks, however, failed to set a concrete 2050 target for all G20 nations – instead underlining the importance of reaching the target by or around the middle of the century. This phrasing meets the positions of China and Saudi Arabia, which don’t plan to reach net zero until 2060.

China has pledged to reach net-zero emissions until 2060. Shutterstock

Morrison’s commitment to net-zero emissions by 2050 was welcomed by some, and scrutinised by others, particularly for lack of detail.

In his closing statement at the G20, Morrison talked up the nation’s record on emissions reduction and sought to justify his government’s “technology not taxes” approach to climate action.

He promoted the case for emerging technologies, saying many existed now. He conceded some technologies were not yet invented, but likened the challenge to development of the COVID-19 vaccine which “didn’t exist two years ago”.

Morrison’s focus on technology appeared to resonate. G20 leaders agreed to “cooperate on the deployment and dissemination of zero or low carbon emission and renewable technologies, including sustainable bioenergy, to enable a transition towards low-emission power systems”.

Read more: If all 2030 climate targets are met, the planet will heat by 2.7℃ this century. That's not OK

United Nations Secretary General Antonio Guterres had called on G20 leaders to strike a deal on coal, saying wealthy countries should phase out coal-fired power by 2030 while developing nations should do so by 2040.

But he was left disappointed. The G20’s final communique failed to put a timeline on the phase-out, instead saying it should be done “as soon as possible”.

Unsurprisingly, Australia pushed back on coal phase-outs, alongside India and China.

However, small steps towards phasing out coal were achieved. Leaders accepted the G7 position to end international public finance for “new unabated coal power generation abroad by the end of 2021”. But this commitment does not address existing coal plants, and it means coal can still be burned with carbon capture and storage technology.

Australia’s overall contribution to the G20 was low-key. In a defiant statement about climate policy issued last week, Morrison declared the nation “won’t be lectured by others who do not understand Australia”. On this, Morrison may regard the G20 as a success, for it required few concessions on Australia’s position on climate.

Morrison enjoyed some positive moments at the G20, including a bilateral meeting with Indonesian President Joko Widodo. This resulted in a joint statement on cooperation on the green economy and energy transition – an important move that advances the bilateral relationship while recognising the significance of Indonesia’s forthcoming G20 presidency.

But that high note was overshadowed when French President Emmanuel Macron claimed Morrison lied to him about cancelling the major French submarine contract.

The comments deepen the rift between Australia and France. Heading into COP26, this could cause Australia issues with coalitions such as the G7, the OECD and the European Union, where France is a major player.

Of course, there’s still room for diplomatic pressure and progress on climate action in Glasgow.

There, attention will turn towards national pledges for emissions reduction by 2030 and the action required to meet them. Australia’s 2030 target lags almost all developed countries, and we are one of very few rich nations not to ramp up its 2030 target since the Paris Agreement six years ago.