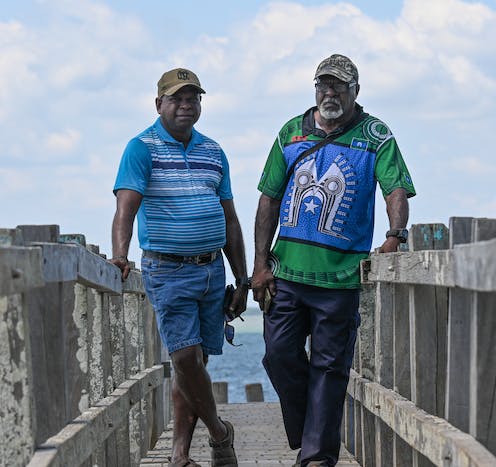 The climate crisis threatens all life on our planet. Even the people who a few years ago were shouting from the rooftops that it was all a hoax have suddenly acknowledged the need for urgent action.

But Australia’s response remains the worst in the developed world. As a result, lawyers have commenced multiple legal proceedings as a way of bringing change.

With their crops flooded with salt water and their sacred sites disappearing under the waves, a group of Torres Strait Islanders this week brought a class action lawsuit against the Australian government.

Two First Nations Elders, Pabai Pabai and Paul Kabai, will argue in court that the Australian government has a duty to cut greenhouse gas emissions to ensure their homeland and their people are not harmed by the climate crisis.

A house on Poruma Island in the Torres Strait where a metre-high wall of sandbags is all that stands between the high tide and the back door. Phillemon Mosby/PR Handout Image

The class action follows another case brought against Environment Minister Sussan Ley by a group of eight children, led by Anjali Sharma. The group attempted to stop the minister from approving a proposed coal mine extension in the Hunter Valley, New South Wales.

In a landmark ruling earlier this year, the Federal Court found the minister

has a duty to take reasonable care to avoid causing personal injury to the children when deciding […] to approve or not approve the coal mine expansion.

This groundbreaking decision set an important precedent and has clearly emboldened the Torres Strait Islands elders to demand the Australian government take urgent action to protect their homes, culture and food sources.

The basis for the Torres Strait islanders’ claims

However, there is an important difference between the suits. While the Dutch courts concluded the Dutch government was in breach of the European Convention on Human Rights, we have no such rights protections in Australia. Environmental groups here are forced to use the common law instead.

Read more: I've won cases against the government before. Here's why I doubt a climate change class action would succeed

To complicate matters, the Morrison government is trying to overturn the Sharma decision by appealing it to the full Federal Court and possibly the High Court, a process that is expected to take a further two years.

For lawyers, it is fascinating to see, in real time, how the law of negligence – which developed from a 1932 Scottish case of a woman who ingested a snail in a bottle of ginger beer – is being stretched to protect Pacific islands from the risk of future inundation.

Unfortunately, these claims are not always successful.

A sea wall on Boigu Island in the Torres Strait. Talei Elu

A legal hurdle in a similar NZ case

Last week, the New Zealand Court of Appeal ruled in another case that common law tort claims are not an appropriate vehicle for addressing the problems of climate change.

Like Mr Pabai and Mr Kabai in the Torres Strait Islands, a Maori leader, Michael Smith, argued that various sites of customary, cultural, historical, nutritional and spiritual significance to his people are close to the coast on low-lying land or in the sea. As such, they were all at risk of harm from the greenhouse emissions of the dairy giant Fonterra and six other companies.

In a legal slapdown, three judges found Mr Smith’s three “tort-based” arguments departed from the fundamental principles of the common law and they refused to extend the existing law to cover his claims.

A tort is a legal wrong committed by one person or entity against another, which is usually remedied through an award of damages. Since 2016, the potential remedies have been expanded from damages to injunctions as a result of the work the National Justice Project did in an asylum seeker case.

Rejecting the idea that the law of negligence was appropriate in the Fonterra case, the New Zealand court added it was an inherently inefficient and ad hoc way of addressing climate change, likely to cause arbitrary outcomes and protracted litigation.

Read more: Children deserve answers to their questions about climate change. Here's how universities can help

Why these cases matter

If it is applied by the Australian Federal Court, the Fonterra case presents a serious legal impediment to the Torres Strait Islands class action.

Despite the chance of failure, climate change litigation based on tort law plays an important role in drawing the risks of inaction by our federal government to the attention of all Australians.

Crucially, these cases highlight the moral imperative for our leaders to do something, as summed up by Justice Mordecai Bromberg in the Sharma case:

It is difficult to characterise in a single phrase the devastation that the plausible evidence presented in this proceeding forecasts for the children. […] Lives will be cut short. Trauma will be far more common and good health harder to hold and maintain.

None of this will be the fault of nature itself. It will largely be inflicted by the inaction of this generation of adults, in what might fairly be described as the greatest intergenerational injustice ever inflicted by one generation of humans upon the next.

Through my work at the National Justice Project, I have worked for years on strategic court cases to establish a duty of care for the federal government to provide medical treatment for asylum seekers on Nauru and to eliminate systemic prejudice.

I can tell you the legal process is hard and drawn out, but the results are worth fighting for. The road ahead through the legal system may be tough but it can be a catalyst for change.

Mr Pabai and Mr Kabai should be congratulated for their brave stance.