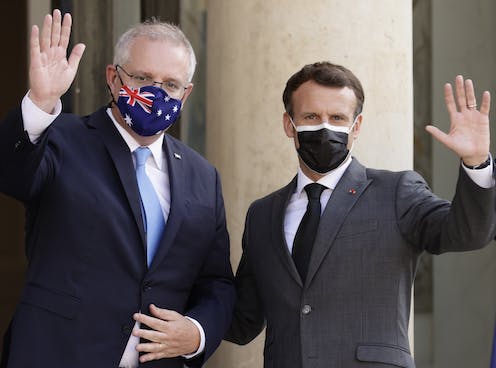 French diplomatic language can be subtle. When Canberra announced its abrupt foreign policy change and unilateral decision to walk away from its contract with French submarine builder Naval Group, the French foreign affairs and defence ministers released a very short statement to “note” the “unfortunate decision”.

But make no mistake. Behind muffled diplomatic language, Paris is furious and there will be repercussions for Australia.

The French media have been far less restrained in their reactions, using language like “stabbing”, “backstabbing”, and “treason”.

It’s not all about the money. France is the third-largest retailer of weapon systems across the globe. Rather, the affront comes from the way in which Canberra announced the decision: through the media.

Left in the dark about Australia’s sudden change of mind, France and the European Union more broadly now face a dramatic re-think of their diplomatic and military doctrine in the Indo-Pacific region on very short notice.

We can expect four major consequences from the scrapping of the A$90 billion submarine deal with France.

1. Possible economic retaliation from the EU

In the wake of Brexit, the UK and Australia are currently renegotiating free trade agreements with the EU. There can be little doubt some kind of economic retaliation will now come against both Britain and Australia through EU legislation.

With German Chancellor Angela Merkel soon to step down, French President Emmanuel Macron will have right of way to shape these FTAs, meaning Australia may find the door to Europe and its markets blocked for decades to come.

For example, France was supposed to help facilitate the Australia-EU agreement with regard to mining resources, in particular. This support is now likely to be withdrawn.

The French parliament could also refuse to ratify the FTA when it is formalised. One of France’s leading Liberal politicians, Renaud Muselier, is calling on the EU to suspend negotiations with Australia altogether.

2. Loss of defence training and upskilling

The entire high-tech ecosystem built around Naval Group in Australia, and in South Australia in particular, will now vanish.

The knock-on effect of this decision will be significant. At the heart of the contract with France was the employment and training of the Australian workforce to ultimately take complete control of the submarine fleet.

It was about Australian self-sufficiency and national sovereignty. Now, the many Australians training in France as part of the “future submarine program” will likely no longer complete their exchange programs and apprenticeships.

Similarly, some of Naval Group’s French subcontractors in cyber-security, telecommunications and the space industry are also likely to depart Australia or reduce their operations, bringing an end to any technology transfer and upskilling for Australians.

a further dramatic loss of Australian sovereignty, as material dependency on the United States robbed Australia of any freedom or choice in any engagement Australia may deem appropriate.

3. South Australia will lose other investments

There are also many effects that will be felt beyond the defence sector.

Since 2016, the South Australian government has leveraged the submarine deal to lure a number of large French multinationals to the state and establish an Office for French Strategy to accelerate Australian-French ventures.

South Australia also established a sister relationship with the region of Brittany in France, resulting in cultural and educational exchanges.

Further to this, SA Premier Steven Marshall also committed to opening a trade office in Paris to drive SA export growth in Europe.

Many of these efforts will now be wasted, with Paris likely to redirect its investments elsewhere.

Finally, the annulment of the submarine deal will bring to a sad end the nascent “French connection” within Australia.

Hundreds of French families who recently relocated to Adelaide will be forced to return to France. This means the bilingual educational program established for French and Australian children now appears bleak.

Similarly under threat are the many partnership agreements between the three universities of South Australia and French universities and research hubs centred specifically on supporting the Naval Group ecosystem in Adelaide.

A Naval Group union representative has at least confirmed the French workers in Adelaide will go home to jobs.

But what will happen to thousands of Australian workers and the hundred or so local businesses supplying parts to Naval Group? The new deal with the US does not guarantee they will be employed, as no contract has yet been signed.

The future of French-Australian relations at a standstill

The overnight change in Australian strategic policy has left the French bemused. The French submarine deal ensured sovereignty, independence and autonomy to Australia, but Paris is discovering the conditioned reflex of relying on “great and powerful friends” (the US and UK) runs high in the Australian psyche.

France proposed a genuine strategic alliance with Australia, one based on mutual respect and common values that would have bolstered Australia’s sovereignty in the long term and diversified Australia’s partnerships to reduce its dependence on those “great and powerful friends”.

However, the French-Australian partnership is unlikely to be salvaged anytime soon given the public humiliation France has felt. Australia will now likely face economic and diplomatic retaliations from France. Just how and when will be decided in due course in both Paris and Brussels.

Read more: What a Biden presidency means for Europe

And there will be another showdown between France and the US, between whom a diplomatic crisis is brewing.

While condemning Australia’s betrayal and unreliability on French national TV, French Foreign Minister Jean-Yves Le Drian also expressed his ire at the US, saying “this is not done between allies” and it’s “a knife in the back”.

The French ambassador to the US declared on Twitter:

Interestingly, exactly 240 years ago the French Navy defeated the British Navy in Chesapeake Bay, paving the way for the victory at Yorktown and the independence of the United States.

Diplomacy is not an overnight matter; it is built on centuries of relationships built with others in the great Concert of Nations. The French also have a long memory, and a sense of history.

To French eyes, Australia is yet to sit at the table of this great Concert of Nations with a sovereignty, foreign policy and submarines of its own.