While some Australians are awaiting the nation reopening after lockdowns with hope and optimism, others are approaching it with dread. This is because a blanket lifting of restrictions when the vaccination rate reaches 70% will have devastating effects on Indigenous and other vulnerable populations.

At present, vaccination rates in Indigenous populations are very low. Meanwhile international data show the risk of serious illness and death among First Nations populations from COVID and other diseases is up to four times that of the wider population.

Once restrictions are lifted everyone unvaccinated will be exposed to the virus. The outcomes for Indigenous people may therefore resemble the early effects of British colonialism, when a high proportion of the population died from introduced infections.

Aboriginal and Torres Strait Islander adults and teenagers need vaccination rates of 90-95% among First Nations people to protect their communities.

As with many other medical conditions, the effects of COVID-19 are worse among people with lower socioeconomic status and especially among Aboriginal and Torres Strait Islander people.

There are multiple reasons for this, including the greater likelihood of underlying conditions and reduced access to appropriate health care.

We saw a similar situation in 2009, when H1N1 influenza rates among Aboriginal and Torres Strait Islander people were more than five times those of other Australians.

Overseas, COVID-19 has been associated with striking racial disparities, with death rates for African Americans more than triple the rates for Caucasians, and more than 4% for Navajo people (compared to 1.6% for the whole population).

Outcomes for other First Nations groups in the United States and elsewhere are similar.

On September 9, the New South Wales government announced its intention to lift lockdowns and other public health measures when the state reaches a vaccination target of 70% of the adult population. This equates to a little over 50% of the state’s population.

If such a policy were implemented it would have disastrous consequences for Aboriginal and Torres Strait Islander and other vulnerable populations.

Vaccination rates in Aboriginal and Torres Strait Islander communities are lagging badly behind the remainder of the Australian population. In many places in NSW, Western Australia, Queensland and the Northern Territory fewer than 20% are fully vaccinated.

What should happen instead?

Aboriginal organisations have called on state and federal governments to delay any substantial easing of restrictions until vaccination rates among Aboriginal and Torres Strait Islander populations aged 12 years and older reach 90-95%.

The organisations calling for such a target include the National Aboriginal Community Controlled Health Organisation, the Aboriginal Medical Services of the Northern Territory and the Central Australian Aboriginal Congress.

A 90-95% vaccination rate gives about the same level of population coverage for all ages as the 80% target for the entire population. That’s because Aboriginal and Torres Strait Islander communities are younger than the wider population.

Vaccinating 90-95% of the Aboriginal and Torres Strait Islander population will better protect children and other unvaccinated people in First Nations communities from infection.

This will require an immediate, well-resourced and determined effort to lift vaccination rates.

How can this be achieved?

The Australian government’s announcement this week of A$7.7 million to fast-track vaccinations in 30 priority areas across the country is an important first step.

But the program needs to be expanded to all areas with significant Aboriginal and Torres Strait Islander populations. 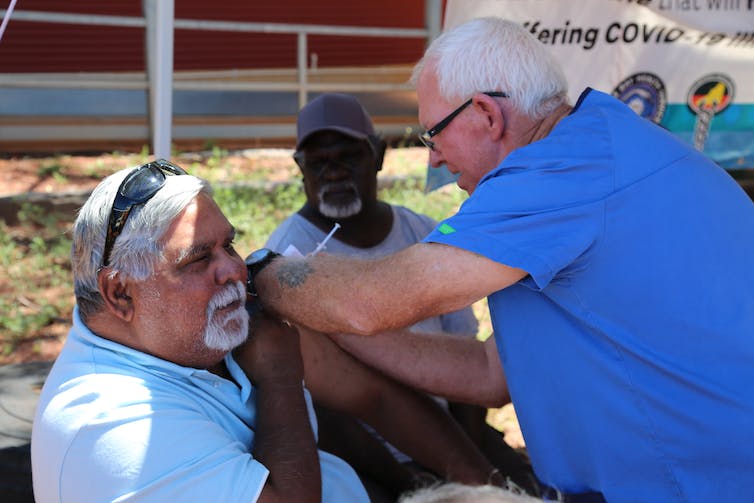 What are the reasons for vaccine hesitancy?

For some, there is a historical and understandable distrust of the health system.

Others have been confused or made fearful by misinformation spread on social media or through fringe religious groups.

Many others are not fundamentally opposed to vaccination but are adopting a “wait and see” approach.

To overcome this hesitancy we need urgent government support for financial incentives, in the form of food vouchers or other benefits. This has been done for vulnerable groups in other countries.

Non-financial incentives requiring full vaccination for travel, entering pubs, clubs, restaurants, sporting venues and so on need to be flagged now with a commencement date in the near future.

All this is achievable but it requires the combined efforts of government working in partnership with Aboriginal community controlled health services.

Until the 90-95% target is met, rigorous restrictions should remain in place. This is consistent with modelling from the Burnet and Doherty institutes, which inform the NSW and national policies about reopening.

As the Burnet Institute told the authors of this article, Australia:

should not move to Phase B and C until vaccination coverage in each jurisdiction’s Aboriginal and Torres Strait Islander communities is as high as, or even higher than, the general community.

Similar considerations undoubtedly apply to some other vulnerable groups in the population.

Australia remains burdened by the legacy of centuries of harm and damage to its First Nations people. We are facing the possibility of a renewed assault on Aboriginal and Torres Strait Islander health.

The difference today is the outcomes are foreseeable and we know what needs to be done to avert them.