Queensland’s love of rugby league, and the fact the state isn’t in lockdown, has won it the right to host the 2021 NRL finals series.

But it was economic gains as much as love of the game that Premier Annastacia Pałaszczuk spruiked when announcing Queensland would host all eight finals games plus the grand final at Brisbane’s Suncorp Stadium. Six of those games are being played outside Brisbane — two in Townsville, two in Mackay, and one apiece in Rockhampton and Sunshine Coast.

“It’s a tremendous gesture from the NRL and will provide an economic boost spread over our regional cities,” Pałaszczuk said in a statement. Her minister for sport, Stirling Hinchliffe, was even more effusive. “It will invest millions of dollars into local economies and boost intra-state tourism into regional Queensland cities,” he said.

Research shows that hosting sport and other events rarely delivers the economic and tourism benefits commonly claimed. In fact, studies around large-scale events often fail to show any positive economic impact at all.

The financial hangover from hosting events such as the Olympics is well-documented. It took Montreal 30 years to pay off the debt incurred from hosting the 1976 Olympic Games. The 2004 Athens and 2016 Rio de Janeiro Games also failed spectacularly to deliver on their promises of economic benefit.

The Olympics, though, is in a league of its own, due to the scale of competition, sheer number of venues required and being a one-off.

Hosting a seasonal sporting event using existing infrastructure should be of greater economic value. The outlays aren’t anywhere near as much, and local hotels, restaurants and other businesses get a boost from the influx of sport tourists.

The problem is that this year’s NRL finals won’t see thousands of footy fans flying from interstate and injecting money into local economies through transport, accommodation, dining and other touristy activities.

So Townsville, Mackay, Rockhampton and Sunshine Coast may benefit from intrastate visitors, but perhaps not to the extent of the promised millions.

Rockhampton Regional Council, for example, has estimated the economic value of the September 12 elimination final between Parramatta Eels and the Newcastle Knights to be $680,000, with about a quarter of the 5,000 spectators from outside the region. That estimate depends on assumptions about those visitors spending money on accommodation, and all spectators spending money on local retail and in hospitality businesses. 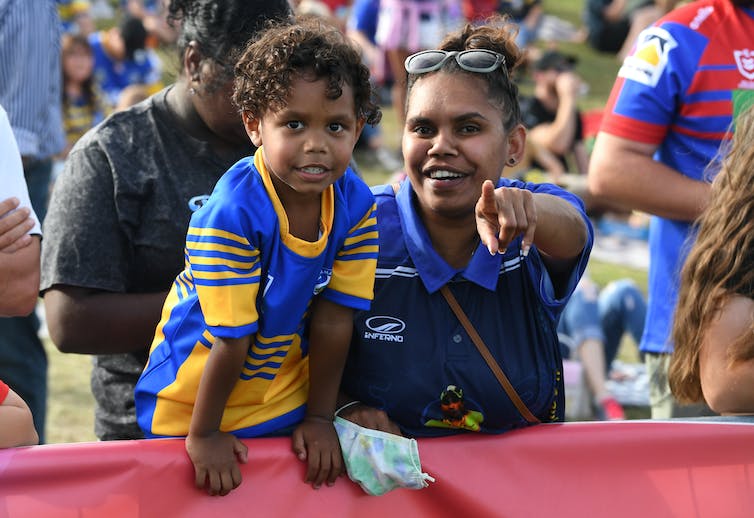 Parramatta Eels fans at the NRL elimination final between Parramatta and the Newcastle Knights in Rockhampton on Sunday, September 12 2021. Darren England/AAP

So how does an economic return occur from hosting smaller-scale events like the NRL finals?

The answer is “event leveraging”. It is not enough just to hold an event; organisers must implement strategies to achieve the benefits touted — encouraging visitors to spend more, and using the occasion to promote the host area as a tourism destination.

For example, French towns and regions that attract Tour de France fans use event-themed activities to keep visitors around longer.

Spreading the NRL finals games between Brisbane and four regional centres can also be seen as a leveraging strategy — spreading any economic benefits more evenly throughout the state — particularly to areas hit hard by the loss of international and interstate tourism.

Read more: Footy crowds: what the AFL and NRL need to turn sport into show business

This also helps what is, given closed borders, the even more important component for Queensland to leverage the NRL finals: media attention that showcases the host region as a future place to visit.

During the Sydney 2000 Olympics, for example, a program encouraged media organisations to cover tourism destinations such as the Blue Mountains and Uluru, by providing visiting journalists with video and other resources

Even with the more modest NRL, media attention isn’t just confined to the hours before, during and after the actual games. There is an intensive industry generating content in the days leading up to game, and in the wash-up.

This occurs through general media coverage and the well-developed communications channels of the NRL and its respective clubs. Now players also cultivate their own audiences through social media. Melbourne Storm star Cameron Munster, for example, has 158,000 followers on Instagram.

The biggest audiences, though, come from game broadcasts. These typically are replete with aerial shots of the ground and other imagery showcasing the host city.

Queensland’s premier and minister for sport must therefore be relieved the NRL has rescheduled the preliminary final (at Suncorp Stadium in Brisbane), originally set to coincide with the AFL grand final on September 25. One of the teams in that preliminary final is Melbourne Storm. The broadcast would have denied the NRL, and Queensland, thousands of television viewers.

So the NRL finals should provide some immediate economic benefit to the host cities and towns, though perhaps not as much as the Queensland government would like to think. They also provide a great opportunity to promote regional Queensland as a tourist destination to interstate audiences.

But without the time to implement strategies to really leverage these events, the extent of economic benefits that will flow to Queensland in the longer term is hard to estimate.