The arrival of the Delta variant in Indonesia has plunged Bali, one of the country’s richest provinces, into an economic crisis and a conflict between beliefs and public health measures.

Mask wearing is now mandatory and a partial lockdown is in place. But many Balinese see the virus as something caused by forces we cannot apprehend and require ritual to appease.

The English word supernatural does not do justice to the depth of this understanding of causation. The Balinese word niskala refers to another level of reality which underlies the everyday reality known as sekala.

The solution therefore lies (at least partially) in ritual, but Balinese ritual is inherently collective – hundreds or thousands of people making offerings and praying together – especially to address a problem on this scale. While this makes sense in niskala terms, in the sekala world of public health it is dangerous.

Last month, the official organisation of Balinese Hinduism (Parisada Hindu Dharma) and the council of customary villages (Majelis Desa Adat) issued a joint statement urging people to restrict the scale of essential ritual observances and the number of people attending. The military and police would be “supporting” the request.

Bali hotels and restaurants are all but empty and employees have been laid off or put on minimal salaries. The tiny street-side businesses selling cheap trinkets for tourists have either disappeared or moved into survival mode by selling cheap food for locals.

The secondary layer of industries that once served the now collapsed tourism sector, including building and agriculture, have likewise lost most of their incomes. Official estimates (probably underestimates) are of 100,000 jobs lost.

A complicating factor is that for most people the main concern still appears to be the economic impact — and getting tourism flowing again. This is obviously desirable in the short term, but does not address the longer-term risks of an economy based almost entirely on a single sector. 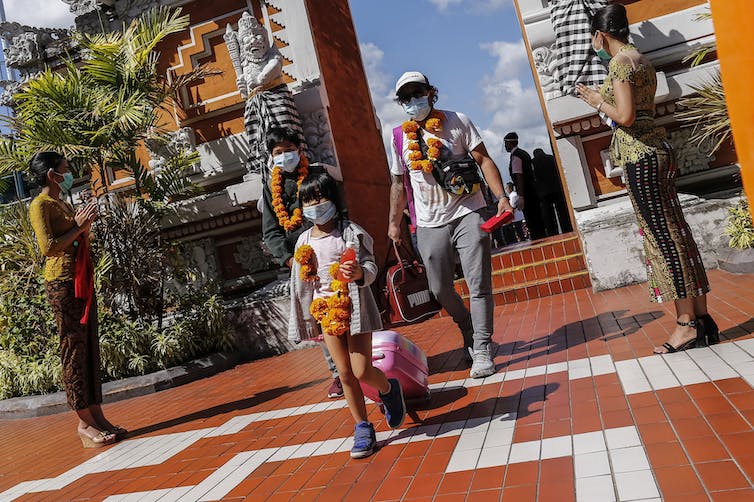 Since March 2020, international tourist arrivals fell from around 15,000 per week to a handful. The drop in domestic figures was only slightly less dramatic. Between 2019 and 2020, the number of international visitors dropped by 79%, and by 66% for domestic travellers.

The overall economic impact was from more than 5% annual growth to more than 10% contraction.

Low levels of testing and systemic under-reporting have long obscured real numbers in Indonesia. But when the Delta variant arrived in July, Indonesia became one of the new frontlines — described by some as the next India.

The government had previously tried to minimise the perception of risk and prioritised the economy over public health, but it was finally forced to accept reality and impose (relatively modest) restrictions.

Bali especially had relatively low numbers of infections, even allowing for under-reporting. The main impact was the economic distress caused by the sudden and prolonged collapse in tourism.

Read more: How Bali could build a better kind of tourism after the pandemic

Many people had to return to their villages to survive off an already strained subsistence economy. This is a time-honoured safety net whenever tourism has one of its periodic crises and it works — for a while.

But now, many people have been without incomes for well over a year. Support from family, friends or charities is not sustainable indefinitely. People with unpaid debts (usually for motor vehicles or investment in tourism businesses) are in especially difficult situations as interest rates are high and many are selling off assets cheaply to repay loans.

While there have been some success stories of people rediscovering agriculture, they are exceptions. Most people are waiting and praying for tourism to resume.

The government has been praying too, by sponsoring major rituals in temples of island-wide significance, ostensibly for protection from the pandemic, but also, as the deputy governor put it, for Bali to get “back to normal”.

But it also has more pragmatic plans. Vaccination is a priority, with official figures claiming “100% coverage” with first vaccination and about 36% second vaccination.

Early in 2021, the Indonesian government initiated a plan for 25% of the staff of seven ministries to return to Bali and work remotely from there. There is also a plan for a new five-year visa to attract digital nomads, many of whom have been operating less than legally.

Another key element is an accreditation program for hospitality businesses and tourism attractions to send a message that Bali is ready to welcome tourists, but with strict health protocols.

Until recently, the island remained open to domestic arrivals, but from Java this carries a high risk of infection. There have been plans for re-opening the island to international tourism, but each has been postponed because of new developments.

Since the partial lockdown in July, a further 3,500 hotel employees have been laid off and hotels and restaurants (at least 48 at last count) are now for sale. Hospitals on the island have been overwhelmed, oxygen supplies are low and many expatriates who had ridden out the first wave are now trying to leave.

These risks of relying on tourism have been made glaringly obvious by a series of disruptions over the past decades, beginning with the 9/11 attack in US and including volcanic eruptions and less dramatic epidemics.

The government may finally be persuaded to act on strong advice from the Bank of Indonesia to reduce the dependence on tourism by developing “other sectors such as agriculture, creative economy, digital economy and education”. Such solutions may appear obvious, but are easier said than done.