As evacuees and refugees from Afghanistan start their new lives in Australia, their ability to navigate the digital world will be crucial. Our research, published today, reveals how newly arrived refugees use digital technologies as they begin this new chapter.

Our report shows strong rates of technology use and access among newly-arrived refugees, and particularly for communication. But gaps remain in other aspects of digital inclusion, especially for women and children. 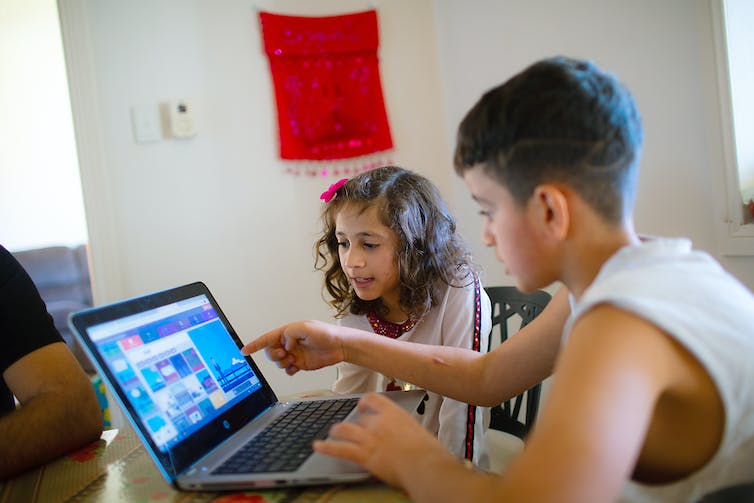 Digital access and skills are becoming increasingly important for refugees settling in Australia, particularly with our increased dependence on technology as a result of the COVID-19 pandemic.

Aside from COVID-related reasons, digital devices at home are now vital for children to participate in education — and for adults wanting to learn English, or seek further education or work opportunities.

Our latest research, Foundations for Belonging 2021, is led by Settlement Services International (SSI) and researchers at Western Sydney University. It is the second of a series exploring the social and civic participation of new refugees in Australia, and their sense of belonging.

In our previous work, conducted in late 2019, refugees reported engaging in high levels of digital communication to maintain ties with friends, family and community locally and overseas.

At the same time refugees — especially women — cited difficulty with online navigation as one of the most common barriers to accessing essential services such as MyGov and Medicare — alongside language difficulties.

For our latest work, we held focus groups with refugee women from different language backgrounds to get a clearer picture of their digital lives. 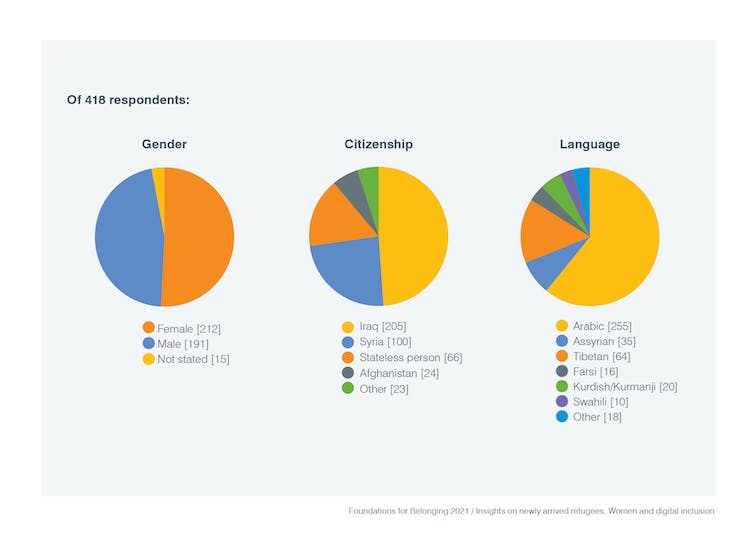 The majority of refugees surveyed had Iraqi citizenship, and most spoke Arabic. Settlement Services International

The 418 people in our representative sample had lived in Australia for an average of 24 months, with about half (49%) having arrived in 2018.

The countries they arrived from reflected Australia’s humanitarian intake at that time, with a focus on Syria and Iraq. Afghanistan was the fourth most common country of origin.

Having a diverse group allowed us to compare responses based on factors such as gender, age and household composition.

Our study found 95% of newly arrived refugee households have access to the internet at home. And 88% also reported having sufficient data allowance, and using the internet at similar rates to the wider community.

Interestingly, there were no noticeable differences based on gender, household composition or country of birth. 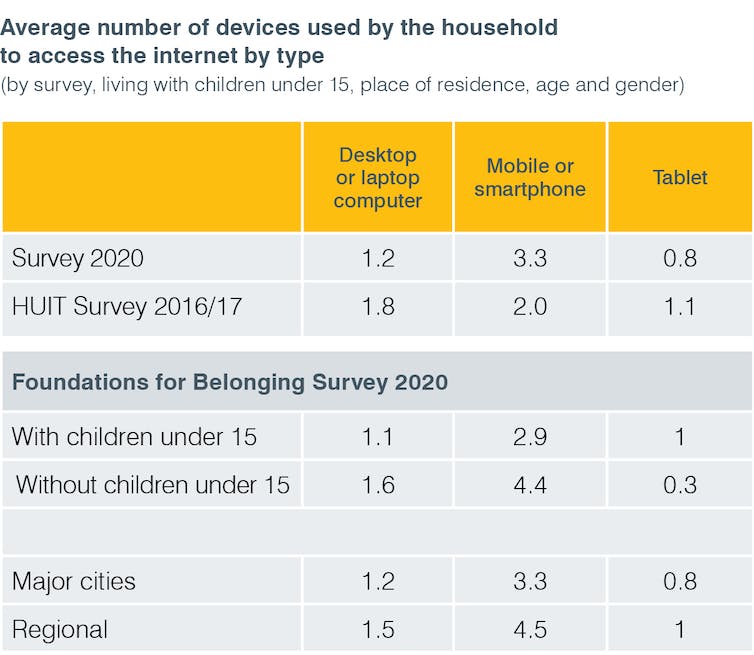 Refugee households in Australia have higher rates of mobile phone ownership than other households — with refugees living in the regions owning more than those in the cities. Settlement Services International

Refugee households also had a higher than average number of mobiles or smartphones. This is reinforced by other global research which has demonstrated the importance of mobile phones for refugees to seek and share information, and stay in touch with loved ones.

Gaps remain for women and children

This is worrying, considering these devices are often necessary for school education. It’s also the opposite to the trend in other Australian households — wherein having children under 15 is linked to having more laptops and tablets on average.

Refugee families consistently report having to juggle a limited number of laptops, computers and tablets. This causes both children and parents to struggle with access to learning.

Our research also found a small but persistent gender gap in digital skills. Women reported less internet use than men across all online activities including banking, education, health services and social services.

They were significantly more likely to struggle with navigating digital modes of support, and online essential services (although younger women and those with children under 18 struggled less).

Yet women were more likely than men to maintain ties with friends and family in Australia and overseas through digital communication.

The main reason for refugees using the internet was for entertainment, followed by banking and to access social services. Settlement Services International

Finding assistance in accessing and using technology was a frequent topic in our focus groups. For example, women discussed borrowing laptops, or asking a friend to help them fill out an online form.

Younger refugee women also often acted as “digital enablers” by assisting older relatives with digital tasks. And older women were motivated to build their digital skills — pointing to the potential for formal and informal learning to facilitate womens’ digital independence.

Still, the onus of narrowing the digital divide should not be on refugees. Our research underscores the need for stronger digital inclusion in settlement policy and programs, with a particular focus on access to devices for learning and education.