If you’ve ever visited Australia’s highest peak — Mount Kosciuszko — you might remember the long uphill trek to the summit past some of Australia’s most picturesque and rugged landscapes. Vibrant snow gums, boardwalks with meadows of exquisite alpine plants, and blinding patches of snow.

As you approach the summit, a quartet of stunning blue lakes appear, created by glaciers during the last ice age that carved new valleys out of the mountain.

Lakes like these are windows to the past, offering an opportunity to understand how our climate and environment has changed over hundreds to thousands of years. One such lake, Club Lake — so-named for its resemblance to a suit in a deck of cards — was the focus of our new study.

After studying the lake’s sediment, we learned the Australian Alps experienced a sudden climate change about 1,600 years ago that brought a long spell of warmer conditions. What makes this sudden warming event particularly interesting is that it bears striking similarity to today.

Climate change in the Australian Alps

The Australian alpine region is the traditional home of a number of Aboriginal groups, including the Ngarigo, Walgalu and Djilamatang people. It is also home to highly diverse flora and fauna that occur nowhere else, from billy buttons (Craspedia costiniana) known for their vibrant yellow rosette of tiny flowers, to the broad-toothed rat and its chubby cheeks. 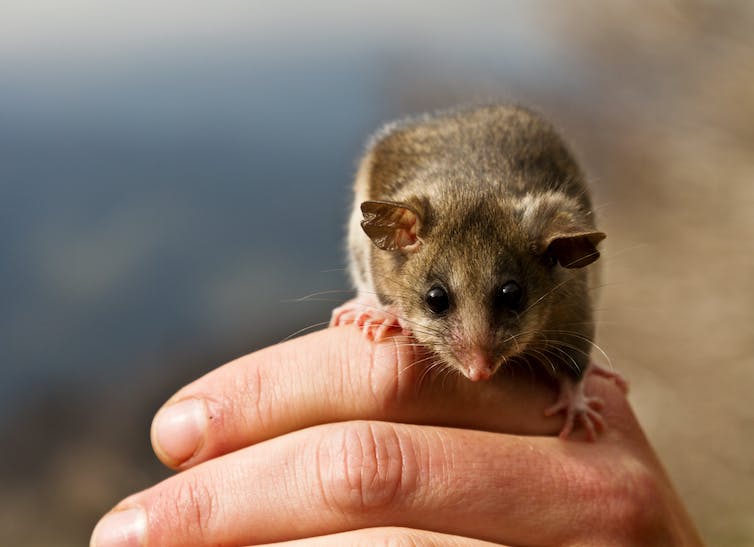 Mountain pygmy possums like in Australia’s alpine region, and are under dire threat from climate change. AAP Image/Department of Sustainability and Environment/Tim Arch

But this unique wildlife is under immense threat from climate change.

By 2100, Australia may warm by at least 4℃, with bushfires becoming more frequent and devastating. The fragile alpine ecosystem will be hit particularly hard by these changes.

Read more: Meet the broad-toothed rat: a chubby-cheeked and inquisitive Australian rodent that needs our help

Many of Australia’s alpine species are already near their climatic limits, and are constrained by altitude. They’re at risk of becoming regionally extinct if their climatic thresholds are exceeded. As the temperature warms, treelines move upslope to cooler temperatures, pushing alpine flora and fauna to higher elevations. At some point they can go no higher — they’re squeezed out of their niche.

The critically endangered mountain pygmy-possum, for example, relies on the seasonal snowpack for winter hibernation, but increased temperatures are limiting this habitat.

A dip into the past

Lake sediments are used all over the world as indicators of climate and environmental change because of the unique way they trap material. A body of water can act as a seal that ensures sediments are largely undisturbed over time.

We extracted sediments from the bottom of Club Lake to a depth of 35 centimetres. This equates to about 3,500 years of history, approximately 100 years for each centimetre. 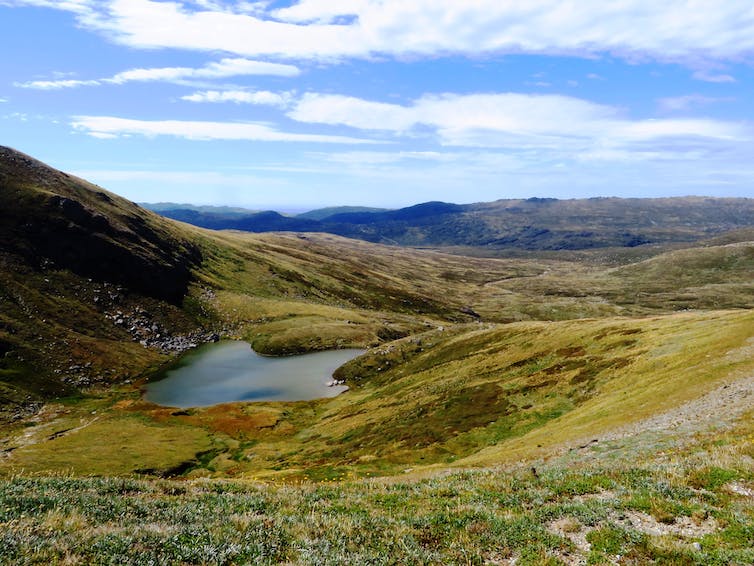 To work out how temperatures have changed over this time, we looked for the presence of molecular fossils, called “lipid biomarkers”. Analysing these biomarkers in the laboratory can tell us what the temperature in the environment was like, hundreds or thousands of years ago.

In the 3,500 years we examined, we detected a gradual warming trend. Superimposed on this, we found a sudden warming event that started 1,600 years ago, and lasted about six centuries. We suspect it was due to an atmospheric phenomenon linking higher tropical sea surface temperatures to southeastern Australia.

We’re not yet sure how much of Australia was affected by this warming, but other research from 2018 measured similar temperature changes in stalagmites from the Yarrangobilly caves 50 kilometres away. 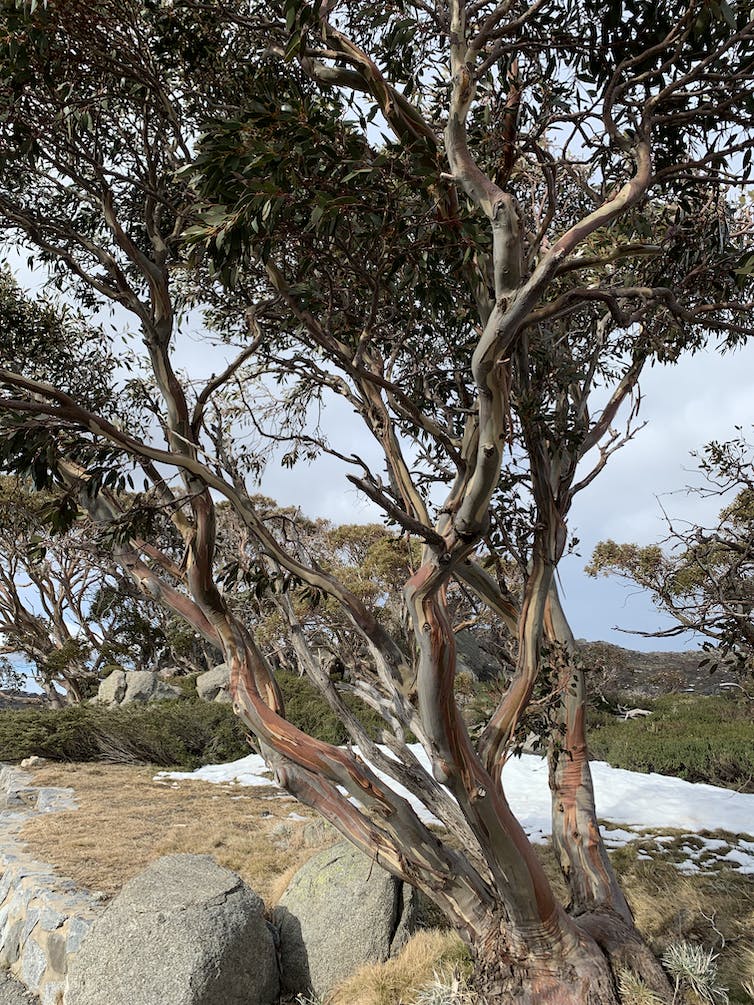 What happened during this climate change?

During this unusual warmth, alpine herbs and shrubs declined, while the abundance of trees, particularly eucalyptus, increased. We know this by looking at grains of pollen preserved at different depths within the lake sediment samples, which indicates what types of plants were growing nearby.

We also found small particles of charcoal, produced by bushfires, embedded within the sediment layers. This showed the changes in vegetation also coincided with greater fire activity.

What surprised us most, however, was discovering a large increase in mercury at this time.

Mercury, which occurs naturally in the environment, is the only metal that’s liquid at room temperature, and is particularly sensitive to temperature changes. Higher temperatures enhance mercury deposition from the atmosphere, and our study shows a five-fold increase in mercury flux 1,600 years ago. 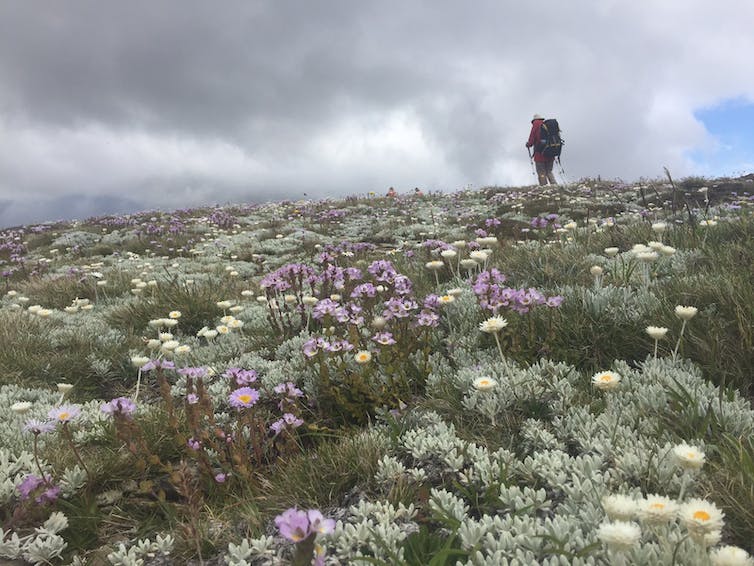 Industrial activities over the last 150 years, such as burning coal, have increased the abundance of mercury significantly. Our findings suggest future climate change is likely to increase the risk of mercury exposure not just in cities, but also in the seemingly remote Australian alpine environment.

Mercury contamination is a significant public health and environmental problem. At certain levels it’s poisonous to the nervous system, and it does not easily degrade.

Read more: A tale of two valleys: Latrobe and Hunter regions both have coal stations, but one has far worse mercury pollution

Insights from the past can help governments, environmental agencies, and scientists come up with effective strategies to protect the vulnerable flora and fauna of the Australian Alps. But it’s not just changes in climate they’ll have to contend with in future.

There are other perils, such as soil erosion and habitat fragmentation from the legacy of sheep and cattle grazing, and tourism. Invasive pests and pathogens are likely to further reduce the resilience of these alpine ecosystems. 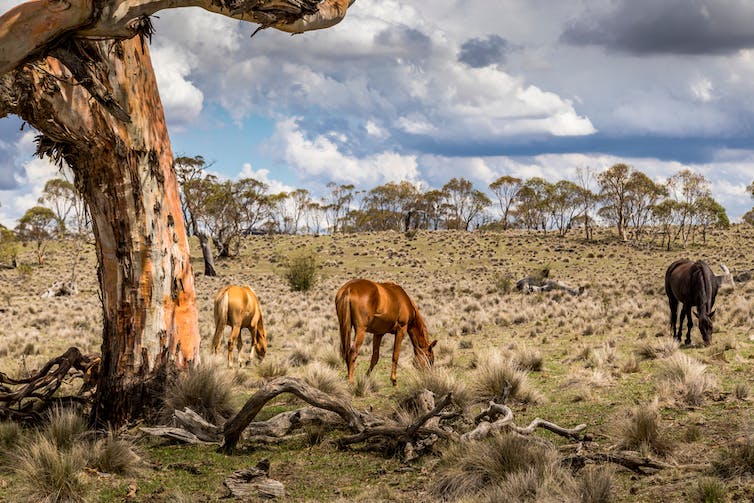 Restoration programs over the last 50 years have aimed to revitalise the natural vegetation in the Kosciuszko National Park following 135 years of grazing — finally banned in 1969 — and the environmental damage caused by the Snowy River Hydro-Electric scheme.

More recently, the federal government has committed A$3.5 million towards recovery from the devastating 2019-2020 bushfires. Incorporating Aboriginal knowledge into mainstream fire management is essential for tackling future crises.

This is the critical time for climate action to protect this unique and iconic Australian landscape.