This article contains mentions of the Stolen Generations, and policies using outdated and potentially offensive terminology when referring to First Nations people.

Earlier this month, the Commonwealth government announced a reparations scheme for Stolen Generations survivors in the Northern Territory, Jervis Bay and the ACT.

This article contains mentions of the Stolen Generations, and policies using outdated and potentially offensive terminology when referring to First Nations people.

Earlier this month, the Commonwealth government announced a reparations scheme for Stolen Generations survivors in the Northern Territory, Jervis Bay and the ACT.

While well-intended, this scheme suffers from the same fatal flaw as similar schemes in other states in that not every eligible person will qualify.

Due to the government’s misplaced faith in the records of child removal policies, possibly less than half the elderly Stolen Generations survivors will qualify under the current compensation packages.

Read more: The discovery of Indigenous children's bodies in Canada is horrific, but Australia has similar tragedies it's yet to reckon with

Not the first redress scheme

Some states have already financially compensated Stolen Generations survivors with varying amounts, while others are under considerable pressure to do so.

In NSW, for instance, survivors may claim compensation if they were removed by or came into the care of the state Aboriginal administration between 1909 and 1969.

Because of the current guidelines, however, it is likely the NSW scheme will apply to fewer than half of the living Aboriginal children who were removed under separation policies. 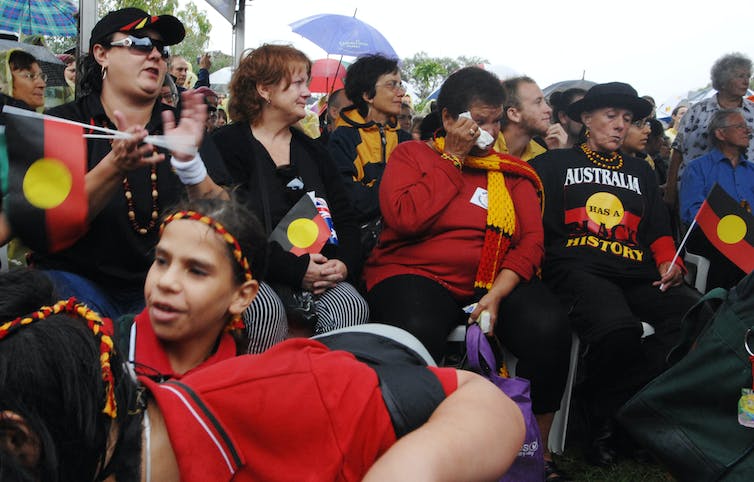 The new reparations scheme from the government follows sustained pressure for financial compensation, including the threat of a class action lawsuit, ever since the Bringing Them Home report in 1997.

Supporters of this redress scheme may well see it as a necessary element of Closing the Gap.

What price is there to pay for children who have been institutionalised and have lost their identity, their family, their culture, their country? Some of them never met their mothers again, they’ve lost their hierarchy in their country. The main thing is, they feel like they don’t belong anywhere.

Read more: Why delaying legislation on a Voice to parliament is welcome — it allows more time to get things right

A history of stolen children

In the late 1960s, when most state agencies were winding up their punitive, Indigenous-specific acts relating to child removal, there would have been many thousands eligible to claim compensation. Now, it is almost too late because many of the original Stolen Generations have passed away without seeing justice.

Under the current scheme, no provision has been made for the intergenerational trauma endured by the children of the survivors who often suffered, and suffer still, the same crippling disadvantages outlined by Austin.

If a child welfare inspector removed a child under the Welfare Act, Aboriginal children could be sent to non-Aboriginal institutions like Mittagong, rather than the homes established specifically for Aboriginal children at Cootamundra and Kinchela. This is because the act didn’t specify where they should go.

In these circumstances, Aboriginal children potentially might not have even known of their Indigeneity. This was a tactic used by the government to separate children from their culture for forced integration.

The consequences of this legalised sleight of hand for three of four generations of children were enormous. It’s possible more NSW Aboriginal children were removed under state welfare laws than under the Aborigines Protection Act.

It seems the federal government is relying on there being records of children being taken, when this was not always the case.

Joy Janaka Williams, who famously sued the state in 2003, was removed under NSW’s 1939 Welfare Act. She would not be eligible for compensation, either. This was because she was taken under the Welfare Act, and the NSW government insists on survivors being taken under the specific Aboriginal acts to be compensated.

Services such as Link-Up provide Stolen Generations survivors with help finding their families after sometimes decades of separation. Through her work at Link-Up NSW, Lizzie May, one of the co-authors here, has heard stories of many Stolen Generation survivors who will not be eligible for compensation. These are a few:

1) there was a child whose presence at home on a school day was noticed by a housing commission officer, and within a week was taken out of school to be institutionalised, where he was abused until he left 18 months later. He is not entitled to compensation under the present scheme

2) another case was a child who was held up in a church one Sunday in a western NSW town and the congregation asked, “Who wants this beautiful black baby?” Someone took her, but no official record of her exists

3) a mother was pressured by her boyfriend into handing over her child to be cared for temporarily in a religious institution. She later found out she could never bring him home. There’s no state record of that transaction, either.

State governments need to amend the criteria to consider the plight of those Stolen Generations survivors whose histories haven’t be documented.

The latest redress scheme inches forward the long struggle for justice for the Stolen Generations. But at present, we can’t even call it a half-step forward until the federal and state governments properly review all of their files relating to Aboriginal state wards and compensate survivors properly and equally.