The Intergovernmental Panel on Climate Change (IPCC) report released earlier this month sounded a “code red for humanity”. At such a crucial time, we should draw on all possible solutions to combating global warming.

About one-quarter of greenhouse gas emissions are associated with the manufacture of the products we use. While a small number of commercial uses for carbon dioxide exist — for instance in the beverage and chemical industries — the current demand isn’t enough to achieve meaningful carbon dioxide reduction.

The good news is that plastics, chemicals, cosmetics and many other products need a carbon source. If we could produce them using carbon dioxide instead of fossil hydrocarbons, we would be able to sequester billions of tonnes of greenhouse gases per year.

How, you may ask? Well, biology already has a solution.

Read more: There aren’t enough trees in the world to offset society’s carbon emissions – and there never will be

You may have heard of microscopic organisms, or microbes — we use them to make beer, spirits and bread. But we can also use them to create biofuels such as ethanol.

They typically need sugar as an input, which competes with human food consumption. However, there are other microbes called “acetogens” which can use carbon dioxide as their input to make several chemicals including ethanol.

Acetogens are thought to be one of the first life-forms on Earth. The ancient Earth’s atmosphere was very different to the atmosphere today — there was no oxygen, yet plentiful carbon dioxide.

Acetogens were able to recycle this carbon using chemical energy sources, such as hydrogen, in a process called gas fermentation. Today, acetogens are found in many anaerobic environments, such as in animals’ guts.

Not being able to use oxygen makes acetogens less efficient at building biomass; they are slow growers. But interestingly, it makes them more efficient producers.

For example, a typical food crop’s energy efficiency (where sunlight is turned into a product) may be around 1%. On the other hand, if solar energy was used to provide renewable hydrogen for use in gas fermentation (via acetogens), this process would have an overall energy efficiency closer to 10-15%.

This means acetogens are potentially up to twice as efficient as most current industrial processes — which makes them a cheaper and more environmentally friendly option. That is, if we can bring the technology to scale. 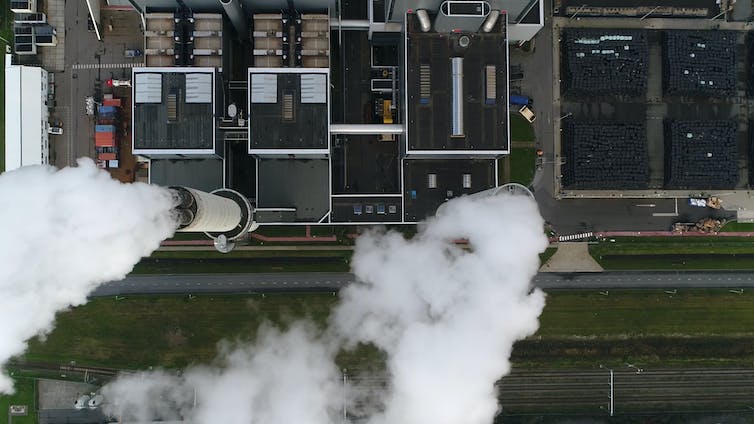 About one-quarter of greenhouse gas emissions come from the manufacture of everyday products, while one-third come from electricity generation and another one-fifth come from transport.

Gas fermentation is scaling up in China, the United States and Europe. Industrial emissions of carbon monoxide and hydrogen are being recycled into ethanol to commercially produce aviation fuel from 2022, plastic bottles from 2024 and even polyester clothes.

In the future this could be expanded to produce chemicals needed to make rubber, plastics, paints and cosmetics, too.

But gas fermentation currently isn’t done commercially with carbon dioxide, despite this being a much larger emission source than carbon monoxide. In part this is because it poses an engineering and bioengineering challenge, but also because it’s expensive.

We recently published an economic assessment in Water Research to help chart a pathway towards widespread acetogen-carbon dioxide recycling.

We found economic barriers in producing some products, but not all. For instance, it is viable today to use carbon dioxide-acetogen fermentation to produce chemicals required to make perspex.

But unlike current commercial operations, this would be enabled by renewable hydrogen production. Increasing the availability of green hydrogen will greatly increase what we can do with gas fermentation.

Australia has a competitive advantage and could be a leader in this technology. As host to the world’s largest green-hydrogen projects, we have the capacity to produce low-cost renewable hydrogen.

Underused renewable waste streams could also enable carbon recycling with acetogens. For instance, large amounts of biogas is produced at wastewater treatment plants and landfills. Currently it’s either burned as waste, or to generate heat and power.

Past research shows us biogas can be converted (or “reformed”) into renewable hydrogen and carbon in a carbon-neutral process.

And we found this carbon and hydrogen could then be used in gas fermentation to make carbon-neutral products. This would provide as much as 12 times more value than just burning biogas to generate heat and power.

The IPCC report shows carbon dioxide removal is required to limit global warming to less than 2℃.

Carbon capture and storage is on most governments’ agendas. But if we change our mindset from viewing carbon as a waste product, then we can change our economic incentive from carbon disposal to carbon reuse.

Carbon dioxide stored underground has no value. If we harness its full potential by using it to manufacture products, this could support myriad industries as they move to sustainable production.

Read more: Our ability to manufacture minerals could transform the gem market, medical industries and even help suck carbon from the air