A major new report published last week by the Intergovernmental Panel on Climate Change (IPCC) contained grave warnings on where Earth’s climate is headed. So what happens if humanity doesn’t get its act together? How bad could climate change actually get?

The IPCC report canvassed various scenarios, from the most terrifying to the best possible case. It’s increasingly unlikely Earth will follow the path of very high greenhouse gas emissions, represented in dark red on the graph below, which would very likely lead to global warming of 3.3℃ to 5.7℃ this century.

But given current policy settings, it’s plausible Earth will follow a mid-range emissions scenario such as that represented in orange. Such a pathway would lead to global warming of between 2℃ and 3.5℃, relative to pre-industrial levels.

So what will Earth look like under warming of that magnitude? And what will life on this planet be like? Academic research can shed light on those crucial questions. And a warning: the answers are confronting. 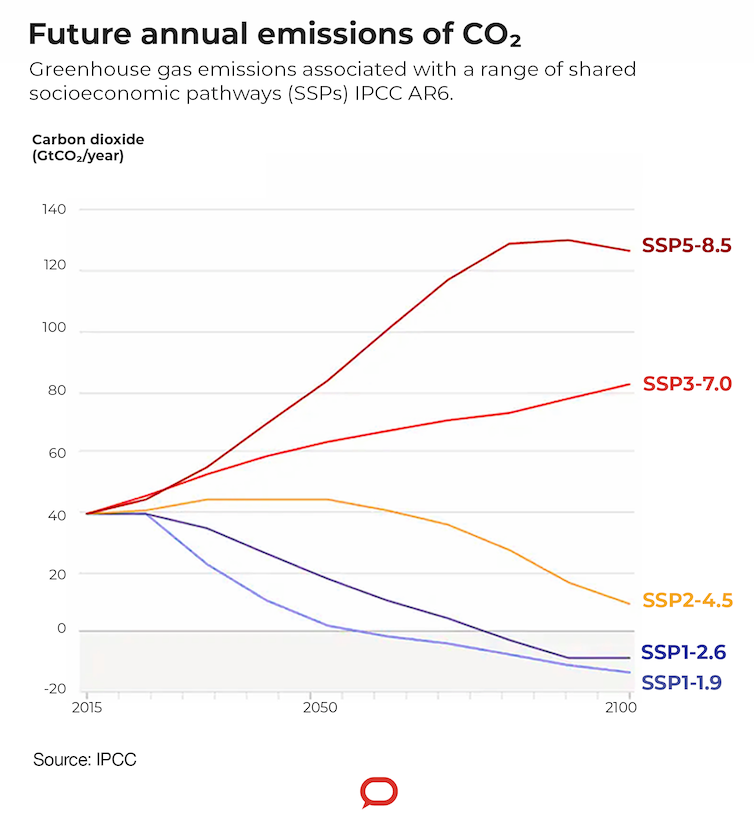 An angrier, less hospitable world The IPCC report confirmed Earth has warmed 1.09℃ since pre-industrial times. This level of warming is already causing significant damage. Around the world over the past few months, the damage has been strikingly evident. Record-shattering heatwaves have struck North America’s west and southern Europe, while extreme rain and flooding has hit central Europe and China. At 3℃ global warming, heatwaves would be even more frequent, intense and longer, while extreme rain will be heavier. The relationship between average global temperature and heat extremes is very strong, although this varies across regions. Over Australia, heatwaves are expected to be slightly hotter than the corresponding global warming threshold. So with 3℃ of global warming, the hottest day of a heatwave will be about 3.6℃ warmer than pre-industrial conditions. What’s more, heatwaves in Australia are projected to become four to five days longer for each degree of global warming. Read more: Climate change has already hit Australia. Unless we act now, a hotter, drier and more dangerous future awaits, IPCC warns 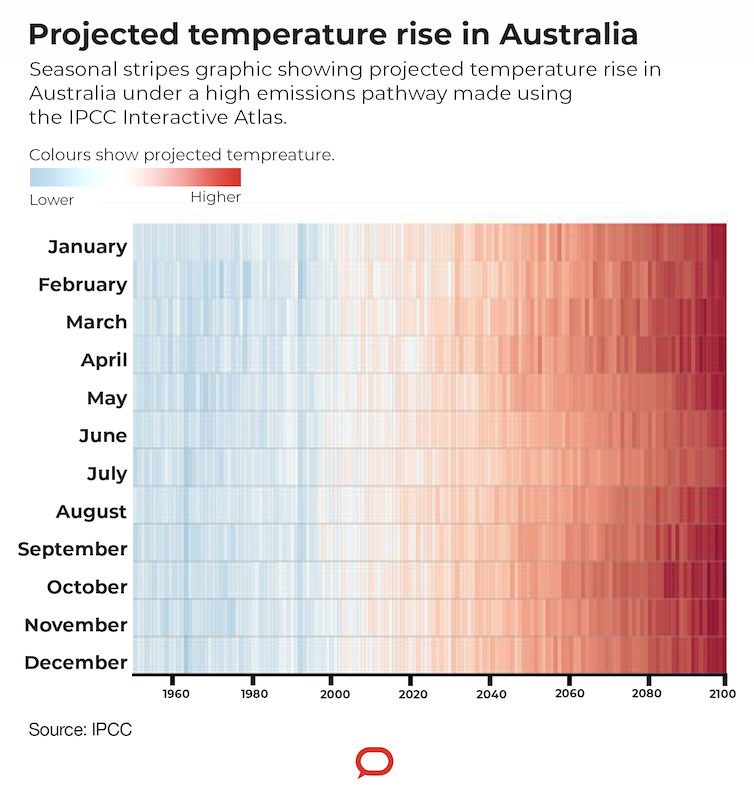 IPCC The IPCC findings show in some parts of the world, there’s a clear relationship between future increases in global warming and a rise in extreme rainfall events. This includes the eastern part of the United States, Alaska and western Canada, Europe and parts of Russia and Africa. The projected increase applies to both daily rainfall events and those lasting five days. Explore future projections of extreme rainfall and other climate variables with the IPCC’s interactive climate atlas. Climate change has already damaged the world’s coral reefs. The Great Barrier Reef has bleached three times in the past five years, giving little time for the ecosystem to recover. In a 2018 report, the IPCC found coral reefs would decline by a further 70-90% under global warming of 1.5℃. Virtually all reefs would be lost with 2℃ warming. Bushfire risk also increases the more we let the climate warm. As the Australian Academy of Science outlined in a report earlier this year, extreme fire days in Australia will increase with global temperatures. Greater increases are projected for southern and eastern Australia. However, in much of Australia the frequency of extreme fire days increases by 100-300% once 3℃ global warming is reached. And conditions conducive to mega-fires – such as those which occurred during the 2019-20 Black Summer – will occur more often over southeast Australia under continued climate change, especially during late spring. Read more: Seriously ugly: here's how Australia will look if the world heats by 3°C this century 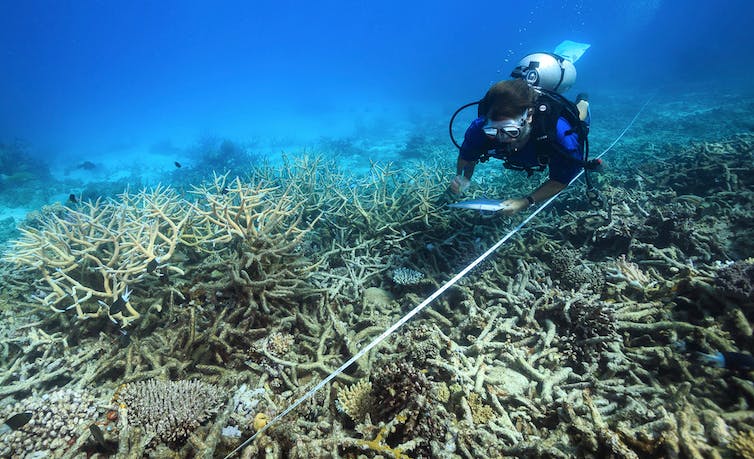 At 2℃ warming, the Great Barrier Reef and others like it will be virtually gone. ARC Centre of Excellence/Tane Sinclair-Taylor On thin ice The more the planet warms, the more we risk triggering disastrous irreversible changes known as “tipping points”. Scientists have identified several potential tipping points which might occur – especially if the climate warms by more than 2℃, in line with the IPCC’s midway scenario. For example, global warming may cause the West Antarctic ice sheet to collapse, resulting in several metres of sea level rise. The exact extent of global warming required to trigger such changes is very uncertain, and climate projections suggest we won’t hit any trigger points this century. However, these irreversible changes remain a distinct possibility if greenhouse gas emissions continue their current trajectory. Read more: Rising seas and melting glaciers: these changes are now irreversible, but we have to act to slow them down 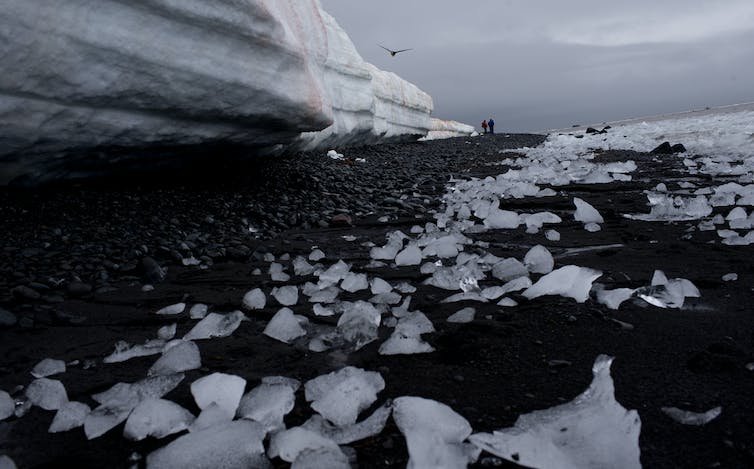 Ice sheet collapse in Antarctica would trigger irreversible sea level rise. Natacha Pisarenko/AP The choice is ours Some climate changes we’ve described under the midway emissions scenario are awful for society and our environment. And as CSIRO climate scientist Pep Canadell, a coordinating lead author of a chapter of the IPCC report, told the Guardian last week, if greenhouse gas emissions continue unabated “there is no bottom end to how much damage we can create”. Humanity is now at a crossroads. The IPCC says if we halve global greenhouse gas emissions within the next 15 years, and reach net-zero emissions before 2060, we have a more than 90% chance of keeping global warming below 2℃. That means every action matters. Each fraction of a degree of global warming prevented will reduce the climate damage and increase the chance Earth avoids the most catastrophic impacts of global warming. Read more: IPCC says Earth will reach temperature rise of about 1.5℃ in around a decade. But limiting any global warming is what matters most