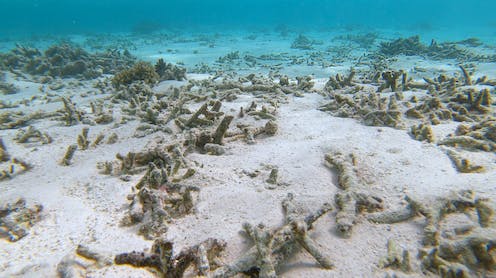 This week, international ambassadors will take a snorkelling trip to the Great Barrier Reef as part of the Australian government’s efforts to stop the reef getting on the world heritage “in danger” list.

The World Heritage Centre of UNESCO is set to make its final decision on whether to officially brand the reef as...

This week, international ambassadors will take a snorkelling trip to the Great Barrier Reef as part of the Australian government’s efforts to stop the reef getting on the world heritage “in danger” list.

The World Heritage Centre of UNESCO is set to make its final decision on whether to officially brand the reef as “in danger” later this month.

To many coral reef researchers like myself, who have witnessed firsthand the increasing coral bleaching and cyclone-driven destruction of this global icon, an in-danger listing comes as no surprise.

But the implications of mass coral death are complex — just because coral is dying doesn’t mean marine life there will end. Instead, it will change.

This is a near-invisible consequence of coral death, with dramatic implications for reef food webs.

Tiny, mobile invertebrates — between 0.125 and 4 millimetres in size — are ubiquitous inhabitants of the surfaces of all reef structures and are the main food source for approximately 70% of fish species on the Great Barrier Reef.

These invertebrates, most visible only under a microscope, are commonly known as “epifauna” and include species of crustaceans, molluscs, and polychaete worms.

Read more: Australian government was 'blindsided' by UN recommendation to list Great Barrier Reef as in-danger. But it's no great surprise

When corals die, their skeletons are quickly overgrown by fine, thread-like “turfing algae”. Turf-covered coral skeletons then break down into beds of rubble.

We wanted to find out how the tiny epifaunal invertebrates — upon which many fish depend - might respond to the widespread replacement of live healthy coral with dead, turf-covered coral. 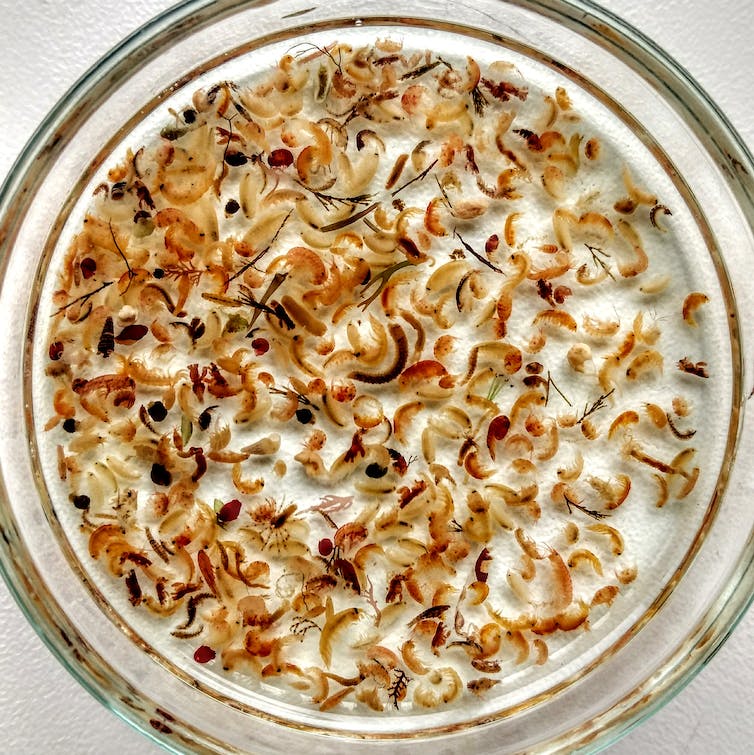 A sample of epifauna under the microscope. Kate Fraser

I took my SCUBA gear and a box of lab equipment, and dived into a series of reefs across eastern Australia, from the Solitary Islands in New South Wales to Lizard Island on the northern Great Barrier Reef.

Underwater, I carefully gathered into sandwich bags the tiny invertebrates living on various species of live coral and those living on dead, turf-covered coral.

But things really got interesting back in the laboratory under the microscope. I sorted each sandwich bag sample of epifauna into sizes, identified them as best I could (many, if not most, species remain unknown to science), and counted them.

I quickly noticed samples taken from live coral took just minutes to count, whereas samples from dead coral could take hours. There were exponentially more animals in the dead coral samples. 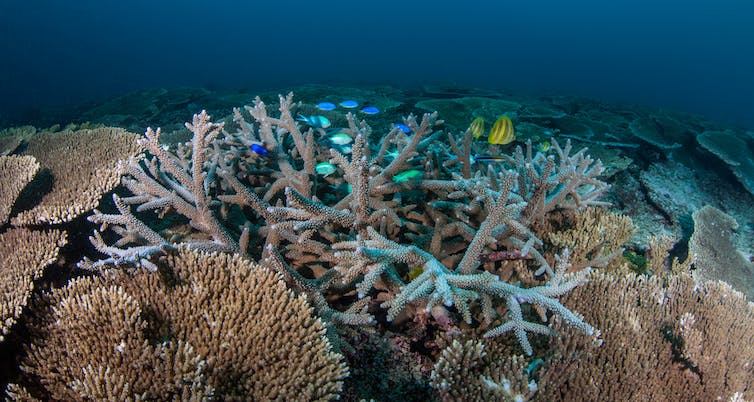 Why do they prefer dead coral?

Counting individual invertebrates is only so useful when considering their contribution to the food web. So we instead used the much more useful metric of “productivity”, which looks at how much weight (biomass) of organisms is produced daily for a given area of reef.

We found epifaunal productivity was far greater on dead, turf-covered coral. The main contributors were the tiniest epifauna — thousands of harpacticoid copepods (a type of crustacean) an eighth of a millimetre in size.

In contrast, coral crabs and glass shrimp contributed the most productivity to epifaunal communities on live coral. At one millimetre and larger, these animals are relative giants in the epifaunal world, with fewer than ten individuals in most live coral samples. 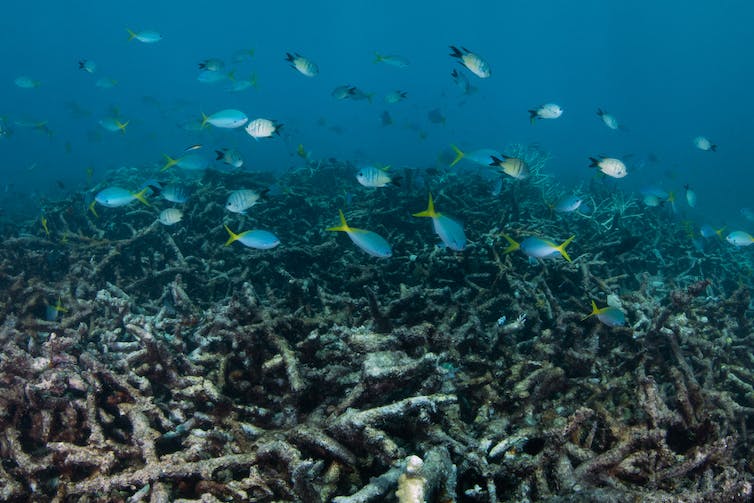 These striking differences may be explained by two things.

First: shelter. Live coral may look complex to the naked eye, but if you zoom in you’ll find turfing algae has more structural complexity that tiny epifauna can hide in, protecting them from predators.

A coral head is actually a community of individual coral polyps, each with a tiny mouth and fine tentacles to trap prey. To smaller epifauna, such as harpacticoid copepods, the surface of live coral is a wall of mouths and a very undesirable habitat.

Read more: Almost 60 coral species around Lizard Island are 'missing' – and a Great Barrier Reef extinction crisis could be next

Second: food. Many epifauna, regardless of size, are herbivores (plant-eaters) or detritivores (organic waste-eaters). Turfing algae is a brilliant trap for fine detritus and an excellent substrate for growing films of even smaller microscopic algae.

This means dead coral overgrown by turfing algae represents a smorgasbord of food options for the tiniest epifauna through to the largest.

Meanwhile, many larger epifauna like coral crabs have evolved to live exclusively on live coral, eating the mucus that covers the polyps or particles trapped by the polyps themselves. 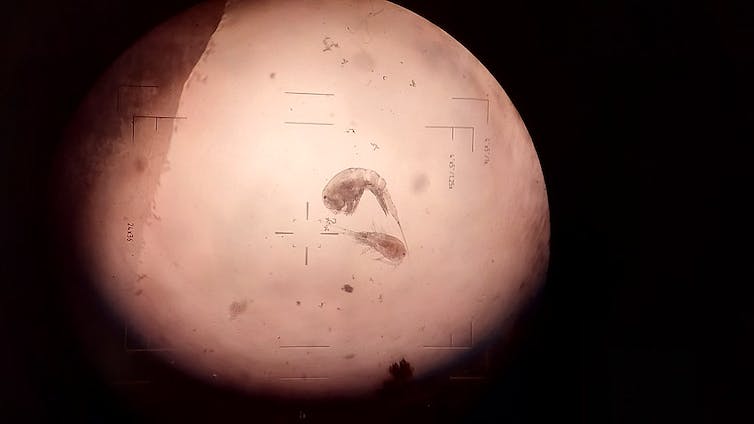 Harpacticoid copepod are just an eighth of a millimetre in size. Naukhan/Wikimedia, CC BY

What this means for life on the reef?

As corals reefs continue to decline, we can expect increased productivity at the base level of reef food webs, with a shift from larger crabs and shrimp to small harpacticoid copepods.

This will affect the flow of food and energy throughout reef food webs, markedly changing the structure of fish and other animal communities. The abundance of animals that eat invertebrates will likely boom with increased coral death.

We might expect higher numbers of fish such as wrasses, cardinalfish, triggerfish, and dragonets, with species preferring the smallest epifauna most likely to flourish. 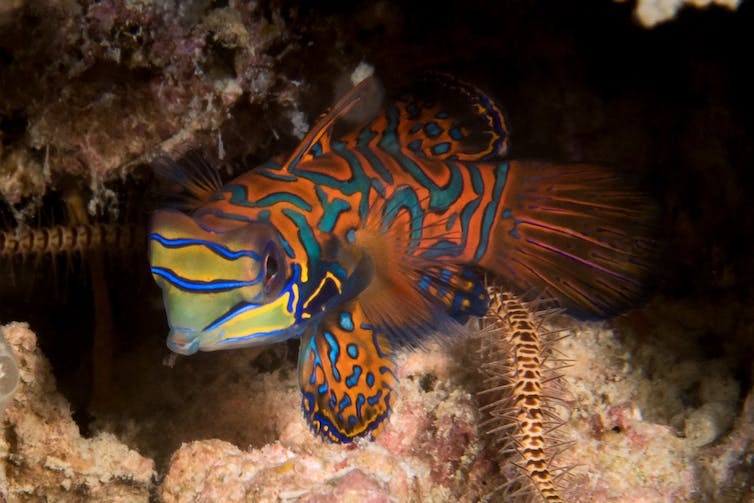 Invertebrate-eating animals are food for a diversity of carnivores on a coral reef, and most fish Australians want to eat are carnivores, such as coral trout, snapper, and Spanish mackerel.

While we didn’t investigate exactly which species are likely to increase following widespread coral death, it’s safe to say populations of fish targeted by recreational and commercial fisheries on Australia’s coral reefs are likely to change as live coral is lost, some for better and some for worse.

The Great Barrier Reef is undoubtedly in danger, and it’s important that we make every effort to protect and conserve the remaining live, healthy coral. However, if corals continue to die, there will remain an abundance of life in their absence, albeit very different life from that to which we are accustomed.

As long as there is hard structure for algae to grow on, there will be epifauna. And where there is epifauna, there is food for fish, although perhaps not for all the fish we want to eat.