Road tripping with a geologist is a little different. While you’re probably reading road signs and dodging roadkill, we’re reading road cuttings and deciphering the history of the area over the previous millions — or even billions — of years.

Geology has shaped the Australian landscape. In Victoria where I live, for example, the western plains are pockmarked by Australia’s youngest volcanoes, while the east of the state has been pushed up to form the mountains of the Great Dividing Range.

Along the southern margin of the state are fossilised braided rivers, relics of when Australia drifted away from Antarctica. Evidence of this event extends into Tasmania, where dolerite, a rock that signifies this rift, looms in enormous columns over Hobart from Mount Wellington.

This probably won’t surprise anyone who knows me, but I have rocks peppered around my house that I’ve collected on my travels. Every time I look at them, I not only think about how the rocks were formed, I’m also reminded of the trip when I collected them.

With international and even state borders set to remain closed for a while longer, this is the perfect time to take a great Australian road trip, become a rock detective, and build up your rock collection while you’re at it.

To help you get started, I’ve listed five rocks any great Australian rock collection should have. 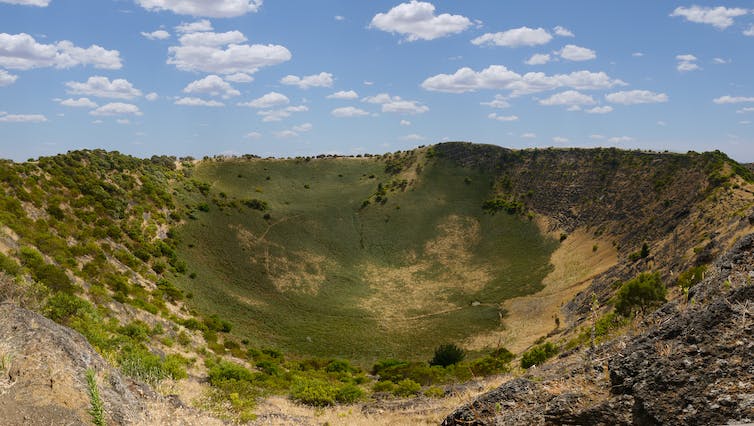 The crater of an erupted volcano near Mount Gambier in Victoria. Shutterstock

The youngest rocks in Australia are those that erupted out of Australia’s youngest volcano in Mount Gambier, South Australia, 4,000 to 8,000 years ago. That volcano is the culmination of an enormous field of volcanoes that span central and western Victoria.

In western Victoria, the volcanoes were formed from magma that ascended from the Earth’s mantle — the layer between the Earth’s core and crust. While the magma was rising, it tore off chunks of the surrounding mantle rock and transported it to the surface. We can find these chunks of the mantle — or mantle xenoliths (xeno = foreign, lith = rock) — in cooled lava today in western Victoria.

At first, these rocks look like any other piece of black or brown basalt, but then you turn them over or crack them open and there’s a blob of bright green rock staring back at you. The mantle rock inside is comprised mainly of olivine, which is a green mineral, and some black/brown pyroxene. 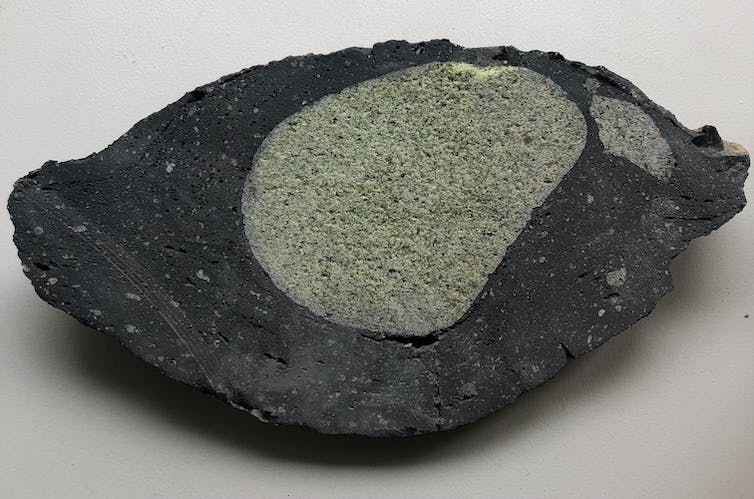 Mantle xenoliths are a great place to start your rock collection because not only will they be your very own piece of Earth’s mantle, but you can find them yourself through a bit of fossicking around some of the volcanoes in western Victoria.

The Nullarbor is a desert plain region which straddles the border of South Australia and Western Australia.

The dry environment is ideal for preserving meteorites that fall to Earth, and the light colour of the limestone country rock and lack of vegetation means the black and brown meteorites are easier to see. 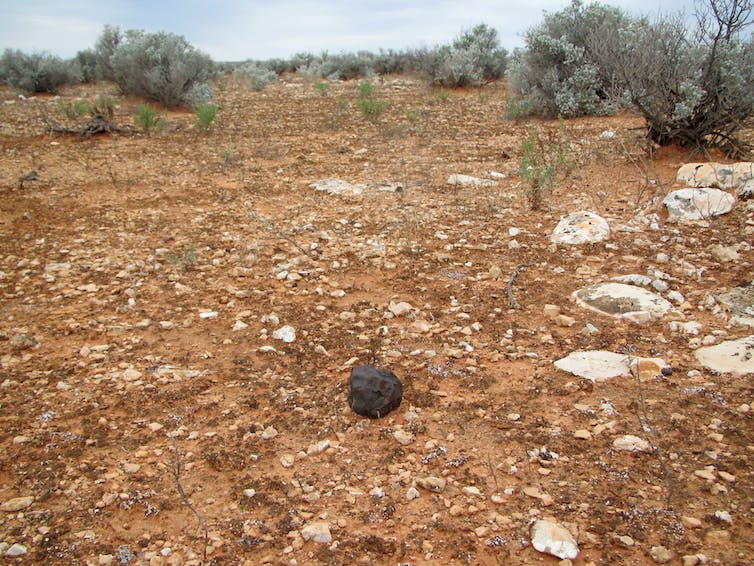 A black meteorite standing out against the white limestone of the Nullarbor Plain. Professor Andy Tomkins, Author provided

Even if you don’t have a great eye for spotting meteorites hiding in plain sight, you can do as the geologists do and use a magnet on a stick to help you. Most meteorites are iron-rich, so wandering around with a magnet hovering over the surface is a good way to pick them up.

Thousands of meteorites have been found in the Nullarbor, some up to 40,000 years old.

You’ve probably heard of Broken Hill because of the large silver, lead and zinc mine there. But the geological conditions that created the ore deposit around 1.7 billion years ago also made some beautiful rocks.

A visit to Broken Hill’s Albert Kersten Mining and Minerals Museum will demonstrate the vast array of unusual minerals found in the region, some of them described for the first time at this locality.

If you’re seeking your own chunk of Broken Hill’s geological history, Round Hill is the place for you. Just a short way out of the town centre, you’ll find beautiful red garnets surrounded by patches of white minerals (quartz and feldspar). 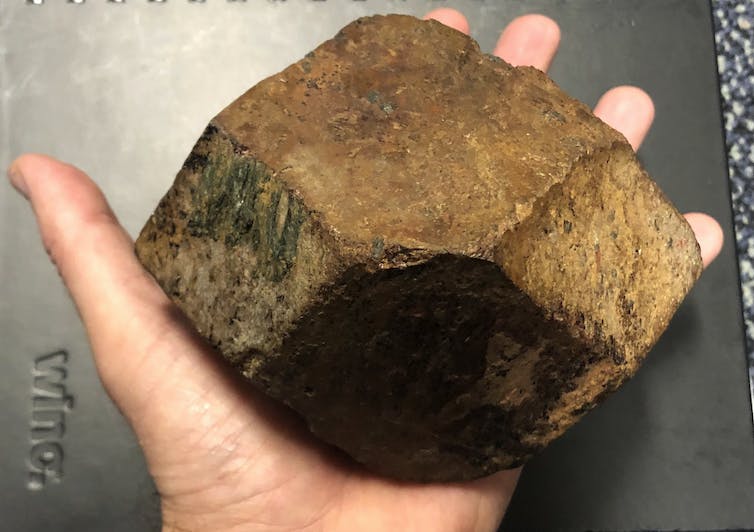 These rocks started out as sand and mud, and record the history of being buried and heated to over 700℃ deep below the Earth’s surface. This process caused the rock to start melting and created the striking stripey, garnet-rich rocks we find there today.

Banded iron formation is a layered sedimentary rock mainly comprised of alternating bands of chert (a sedimentary rock made of quartz) that’s often red in colour and silver to black iron oxide. It is the main host of iron ore, and can be found in several regions in Western Australia.

The Hamersley Province in the northwestern part of Western Australia has the thickest and most extensive banded iron formations in the world. They are about 2.45 to 2.78 billion years old. 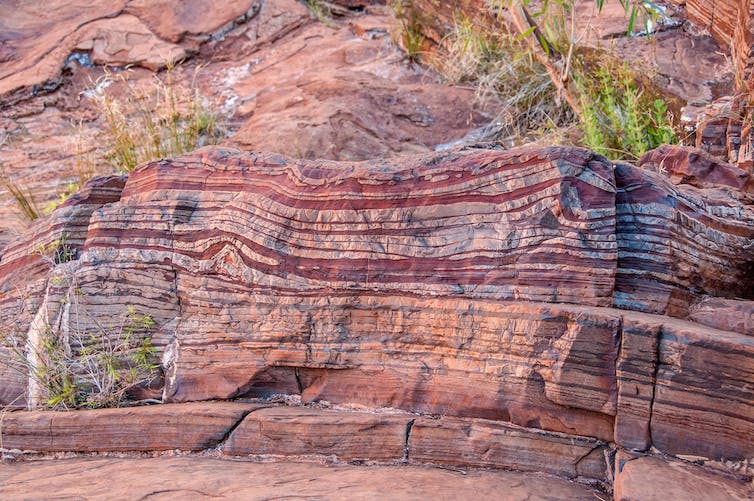 Geologists believe they formed on a continental shelf, where thick continental crust extends out into the ocean and then drops away to oceanic crust.

Banded iron formation is exciting because it no longer forms on Earth today, meaning it records an ancient process that we no longer see happening.

It is thought to have formed in ancient oceans, which were starting to increase in oxygen content at the time. It records the chemical input of these oceans, as well as sediments from the continent and volcanoes on the ocean floor.

Oh to have been in Queensland 100 million years ago! Judging by the fossils found in parts of the state, it would have been a cornucopia of dinosaur activity.

From an unlikely duo of dinosaurs in a 98-million-year-old billabong in Winton, to fossilised evidence of a dinosaur herd at Lark Quarry, Queensland is the place to go to peer back in time to the Mesozoic Era between 252 and 66 million years ago.

And if you’re really lucky, you might even have dinosaur bones on your property, like the huge, long-necked sauropod discovered just this year on a Queensland cattle farm. 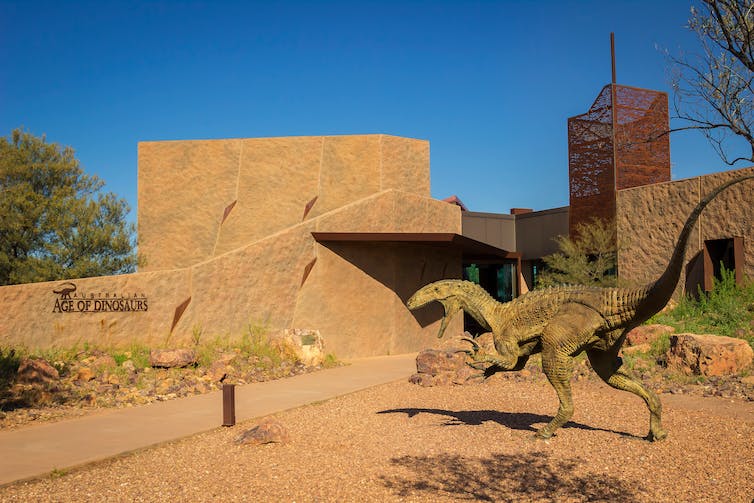 The Australian Age of Dinosaurs Museum in Winton, Queensland, is home to the largest collection of Australian dinosaur fossils. (Note: not a real dinosaur.) Shutterstock

When building your Australian rock collection, remember to check first if fossicking is allowed in the area. When you find an interesting rock, your state or territory geological survey might be able to help with identifying it.

Read more: How to hunt fossils responsibly: 5 tips from a professional palaeontologist