Trees have always been a point of conflict between colonisers and Indigenous people.

At the very beginning of European-Indigenous interactions, skirmishes broke out because colonisers were ignorant of protocols and the desecration of important Indigenous sites and habitats. In the 19th century, as frontiers pushed west into the Country of Wiradjuri, colonists were indifferent to the sanctity of marked trees.

As a news article from the Daily Advertiser in 1941 reported:

The only carved tree […] unfortunately fell victim to the advancing tide of civilisation and was cut up and converted into railway sleepers that now possibly lie somewhere along the line between Yanco and Hay, or Leeton and Griffith.

Most recently, the binary difference between Indigenous and non-Indigenous systems were in the spotlight as Djab Wurrung custodians and activists fought to prevent the desecration of Djab Wurrung sacred trees. Dozens camped to protect a 350-year-old Djab Wurrung Direction Tree, and a Grandmother Tree estimated to be 800 years old.

This conflict showed it is not necessary for a tree to be modified for it to be considered sacred. It also showed us this failure, centuries old, is one born from a conflict of ideas and beliefs between Indigenous and non-Indigenous people.

This year’s NAIDOC theme “Heal Country” asks all Australians to take stock of the ongoing threat and desecration of Indigenous heritage — including sacred, cultural trees. This heritage not only holds value for Indigenous Australians, but for all Australians as a cornerstone of our national identity. 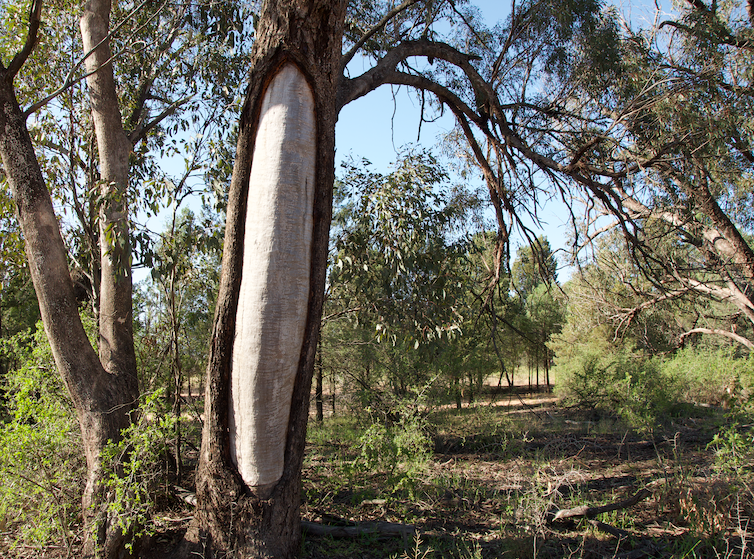 Sentinels in ceremony, birthing and burials

Aboriginal ontology captures the relationship between all worldly and spiritual phenomena, and relationship to Country.

Aboriginal people view the landscape and all things within it not as inanimate places or objects, but as sentient landscapes and entities with agency and metaphysical properties.

Sacred trees are pivotal points in a nexus of interpersonal relationships between person-animal-plant, in person-person kinship, in identity and connection to place. They hold our ancestor stories, they are a direct link to our old people.

Trees transcend simple economics and sit at the centre of the sacred — they are sentinels in ceremony, birthing and burials.

The common thread in Indigenous tree use is its sustainable practice. Rarely would a tree be felled purely for economic gain because its inherent value is realised for spiritual and broader ecosystem health.

Read more: An open letter from 1,200 Australian academics on the Djab Wurrung trees

Scarred trees are still commonly made by Wiradjuri people. Species of eucalypt, particularly red gum, yellow and grey box are carved and, when their bark is soft, removed to make coolamons (wood or bark carrying container) and canoes. Red gums are manipulated while young, their branches interwoven. Commonly called ring trees, they are said to mark boundaries and line the banks of the Marrambidya (Murrumbidgee River).

Wiradjuri women still perform the ancient birthing ceremony of returning a child’s gural (placenta) to Country. My daughter’s gural was returned to Country and buried at the base of river red gum sapling on the banks of the Marrambidya.

This is her place now, she is connected to this sapling. It will grow as she grows, and she will return to this spot for the rest of her life. 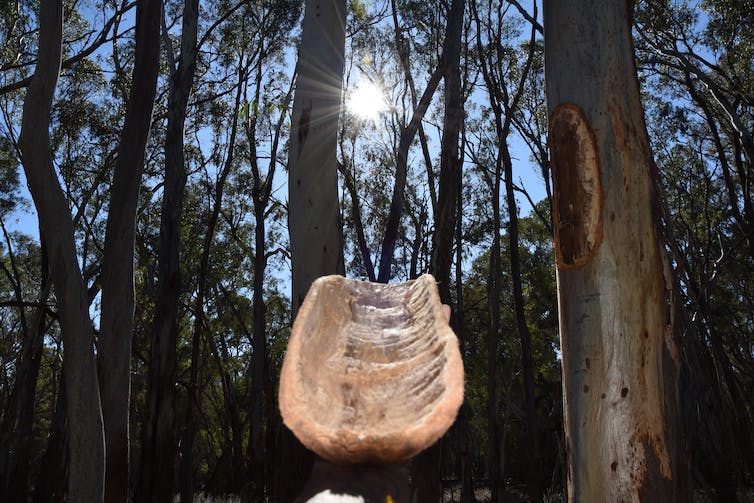 A practice coolamon cut with my daughter and partner. Lillardia Briggs-Houston, Author provided

The threat of public indifference

But even more insidious is the threat of public indifference. It’s a sickness that has spread through our nation’s institutions and political systems.

This sickness shows a lack of respect for Indigenous culture and our humanity. Its symptoms take the form of ongoing desecration of our heritage and incessant dispossession of Indigenous people. 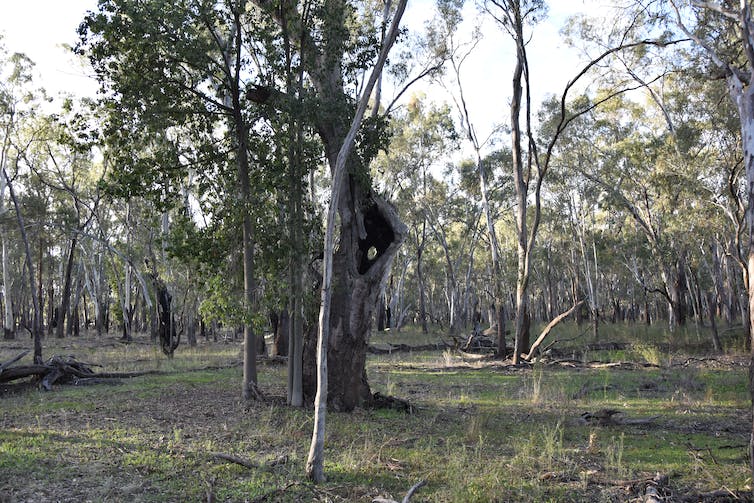 Unless there’s mainstream appreciation of Aboriginal culture and heritage, episodes like the destruction of Juukan Gorge, Djab Wurung and Kuyang will continue, and the public conversation will remain divisive.

In a small township called Narrandera situated along the Marrambidya (Murrumbidgee River), sacred Wiradjuri trees still survive. They represent a living continuum between the old ways and the new.

Most of this country along the Murrumbidgee has been consumed by Australia’s unquenchable appetite for land and water. Almost everywhere you look, there are expanses of land cleared to make way for intensive crop cycles. Miles of irrigation fed by the Marrambidya deliver water to thirsty crops and livestock.

The land clearing and deforestation in this part of Australia is staggering, and it doesn’t surprise me that our abysmal record qualified us as the only developed nation on the World Wildlife Fund’s global list of deforestation hotspots. 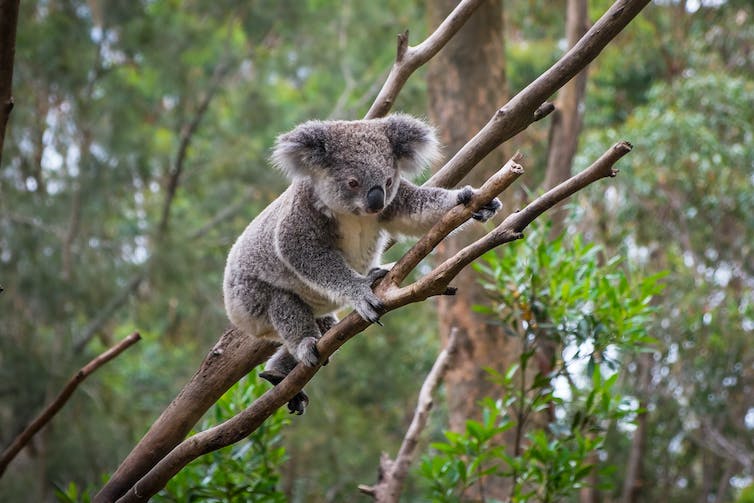 Murrumbidgee Valley is the Riverina’s only koala habitat. Shutterstock

One exception where communities of old trees still stand is in the Murrumbidgee Valley Regional Park, which hugs the Marrambidya and provides a corridor sanctuary for flora and fauna.

It’s the most important ecological habitat in this part of Bidgee country, not only because of its remarkable biodiversity value (this is the Riverina’s only koala habitat) or heritage value, but more so because of its scarceness.

The two photos below show a shield tree and a stone core. These were both found in the same stretch of the Murrumbidgee Valley Regional Park. 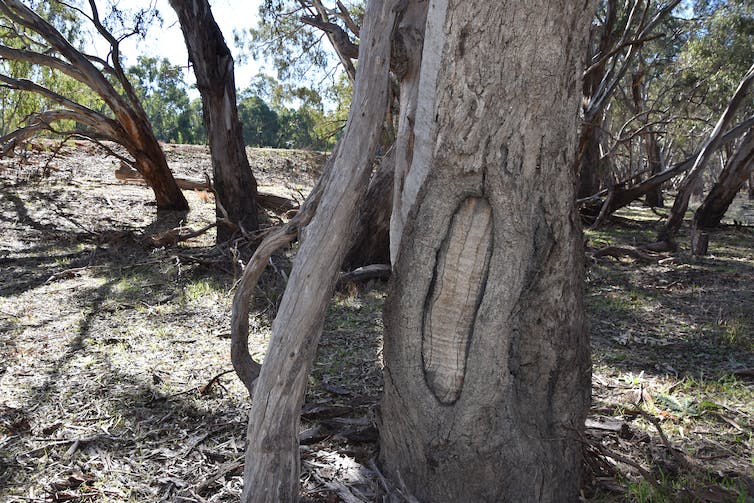 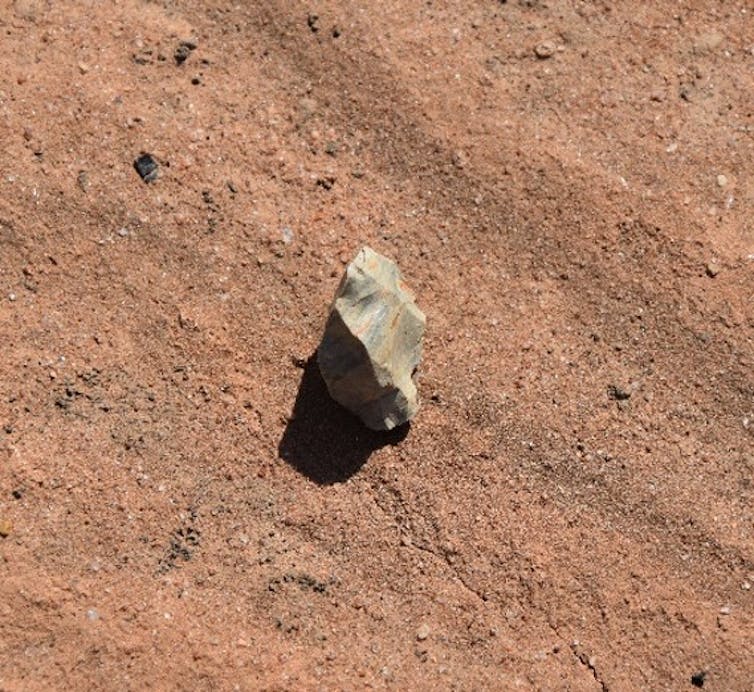 A stone core identified on a exposed surface in the Murrumbidgee Valley National Park. These are stones from which usable flakes, similar to a knife, are struck. They have distinct impressions made from these strikes. Rob Williams, Author provided

Sacred trees used to be common throughout the Riverina, but are now found only in a handful of state forests, national parks, or in vegetation reserves hugging the region’s highways. Extrapolating beyond the fence line into farmland, one could presume they were once common throughout this territory prior to colonisation.

A future for sacred trees

We must ask ourselves some tough questions. What will the next two centuries of unrestrained economic and infrastructure growth mean for Aboriginal heritage? Will your grandchildren have the same opportunity to visit and sit with sacred trees on Country — to listen to them, to speak to them and to appreciate them?

The ongoing desecration of Aboriginal heritage and Country, particularly our waterways, directly traumatises Aboriginal people. When we are denied access to Country and our heritage is destroyed, it leads to poorer health, well-being and social outcomes for Aboriginal and Torres Strait Islander people.

This is not just an Indigenous issue, or only about Indigenous struggle. Indigenous heritage is an asset all Australians can enjoy, celebrate, and advocate for greater protection and sustainable management. Once gone, it can never be replaced.

I acknowledge the Wiradjuri and all Indigenous people, their ancestors, elders, and youth, and advocate for their ongoing connection and right to access and protect Country.

I also acknowledge Lillardia Briggs-Houston, Wiradjuri, Gangulu and Yorta Yorta woman, for her advice and contributions to this piece.