Since the global pandemic began, debate has raged over whether Tokyo should go ahead with the Olympic Games, now set to open on July 23.

The same heated debates were heard the last time an Olympic Games were staged following a global pandemic — the 1920 Summer Olympics in Antwerp.

The International Olympic Committee (IOC) strongly believed the Olympics would help bring the world back together — not just after the devastating Spanish Flu pandemic that killed at least 50 million people, but also the tumult of the first world war.

Only six months after the armistice that ended the conflict — and in the midst of the pandemic — Pierre de Coubertin, the founder of the modern Olympics and president of the IOC, called an extraordinary IOC session to award the 1920 Olympics to Antwerp in recognition of Belgium’s suffering.

Despite the IOC’s enthusiasm, worries about the resurgence of the Spanish Flu stalked the competition. Although the last wave hit Europe in the spring of 1920, newspapers still reported on rumours of new outbreaks in the weeks leading up to the games.

Though a number of Olympic athletes died from the flu in the years leading up to the games, historical records show the virus had no direct impact on the event itself. Nonetheless, planning an Olympics in the aftermath of both a war and pandemic was far from easy for the under-resourced and overstretched Belgians. 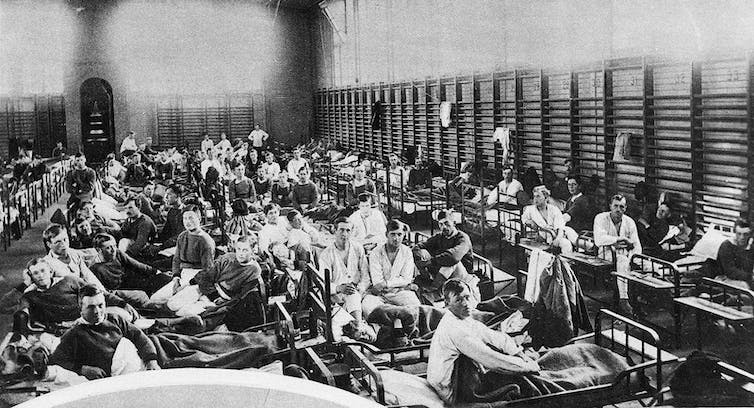 The Antwerp Games followed closely after the Inter-Allied Games, held in Paris in 1919, which brought together soldiers from the Allied powers who were stationed in France and Belgium and had yet to be demobilised.

The popular event saw large crowds, despite concerns about the flu, and provided greater impetus to move ahead with the even more ambitious Olympics. British Olympic officials said in a letter to The Referee newspaper in Sydney,

By renewing her claim to this Olympiad, she [the city of Antwerp] says to her tyrants of yesterday, ‘You thought you had broken my spirit and ruined my fortunes. You have failed.’

The Belgian Olympic Committee refused to invite athletes from the Central Powers who fought in the war — Germany, Austria, Hungary, Bulgaria, and the Ottoman Empire. The newly created Soviet Union also declined to attend. 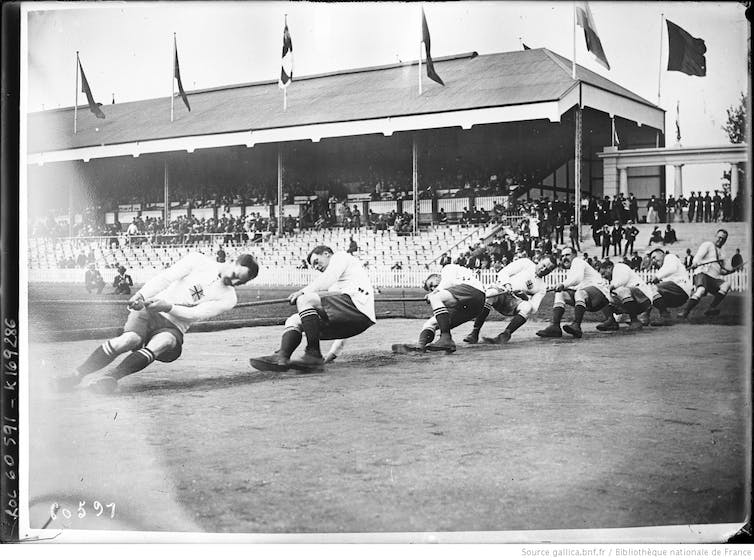 This intrusion of politics on the games proved challenging for the IOC. During the first world war, de Coubertin had avowed Olympic neutrality, and was quoted in the Italian newspaper La Stampa in 1915 as being open to Germany hosting the games the following year. (The 1916 Berlin Olympics were ultimately cancelled due to the war.)

The IOC also made every effort to sell the 1920 Olympics as a celebration of peace. Antwerp was the first Olympics, for example, to feature the famed five interlocking rings designed to represent “the union of the five continents and the meeting of athletes from throughout the world”. 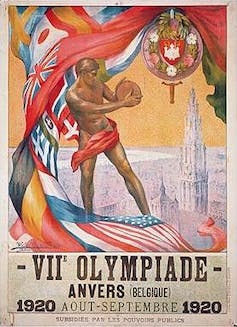 But not everyone was supportive of the idea that “Olympism” could promote peace in the wake of the war. The UK assistant under-secretary for foreign affairs, Eyre Crowe, decried the Olympics as “an international farce” and joined a chorus of government officials arguing against funding a British Olympic team.

The Belgian Olympic Committee, and the athletes themselves, explicitly connected the games to the war, as well.

At the opening ceremonies, the organisers released doves into the air, but also held a religious service in memory of the Allied athletes who had been killed. Military officials also played a key role in organising and staging events: the American team only arrived in Europe, for instance, thanks to a last-minute military transport.

Few fans and a financial failure

Just like the Tokyo Games, De Coubertin and the IOC were under considerable pressure to ensure the Antwerp Olympics went ahead, despite the challenging circumstances.

After an eight-year break following the 1912 Olympics, de Coubertin realised that hosting Olympics in 1920 was essential to defending their position as the world’s premier international sporting competition.

He was aware that alternative games were being organised, including the 1921 Women’s Olympiad in Monte Carlo, which was planned, in part, because of the unwillingness of the Olympics to allow a full range of women’s events.

On August 14, 1920, the Antwerp Games opened with more than 2,600 competing athletes. Several achieved remarkable success, including the Hawaiian-American swimmer, Duke Kahanamoku, who won gold and set a world record in the 100-metre freestyle. But overall, the quality of competition had dipped significantly. 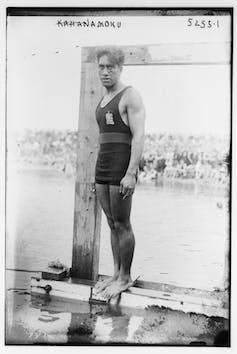 The war was the cause: many star athletes died or returned injured and unable to compete. The British team, for instance, lost several track and field stars — Gerald Anderson, Kenneth Powell and Henry Ashington — all from Oxbridge sporting clubs.

Other athletes had died from the flu, including nine-time Olympic medallist Martin Sheridan.

The number of fans were also lower than organisers expected: many locals were unable to afford the high cost of tickets. The low local interest resulted in a loss of 600 million francs for Belgium, and within three years, the Belgian Olympic Committee had gone bankrupt.

The rush to host the games could only partially explain its financial failure. The Belgian government set aside 4 million francs to fund the competition, but quickly ran out of money and was forced to scrape up money through local fund-raising drives and by selling memorabilia.

American, British, and French Olympic committees similarly faced difficulty raising funds to send athletes to Belgium. In the wake of the war, amid a global economic recession, few governments had money to spend on sport. 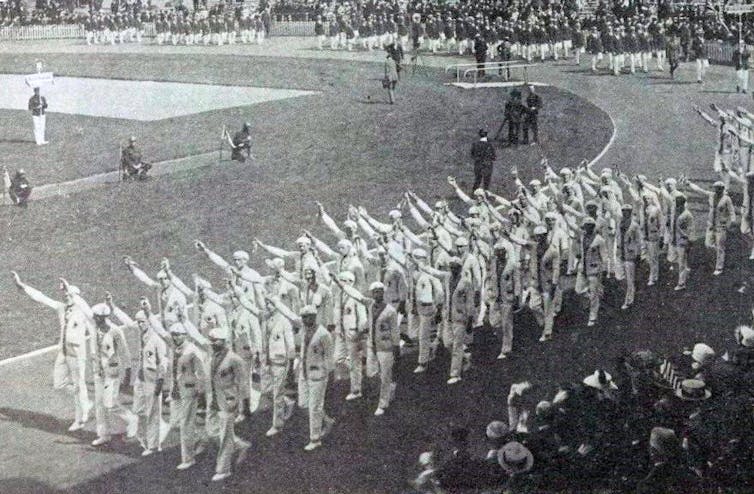 The opening of the 1920 Olympics. Wikimedia Commons

‘We were heartsick when we saw it’

Aileen Riggin during the 1920 Olympic Games in Antwerp. Wikimedia Commons

The food situation was similarly bleak, with athletes given only a roll, coffee and “one little sardine” for breakfast. They were forced to buy their own food — Belgium was still receiving aid because of food shortages.

Sporting facilities, too, were in shambles. The Olympic Stadium was barely finished when the games began — the track was incomplete and many of the races were conducted in muddy conditions.

Swimmers faced even tougher circumstances: the Belgians had not built a pool but instead constructed a wooden frame in an existing waterway.

Aileen Riggin, the gold medallist in the women’s three-meter springboard event, remembers diving into a canal, part of the city’s ancient defences, and into water being shared by all the nautical sports.

We were heartsick when we saw it. […] A 50-meter pool was not asking too much, but of course Belgium did the very best they could. This was right after the war.

It was so cold that many swimmers had to be rescued from hypothermia. They were unconscious, and some of them were really in a bad way and had to be dragged out. 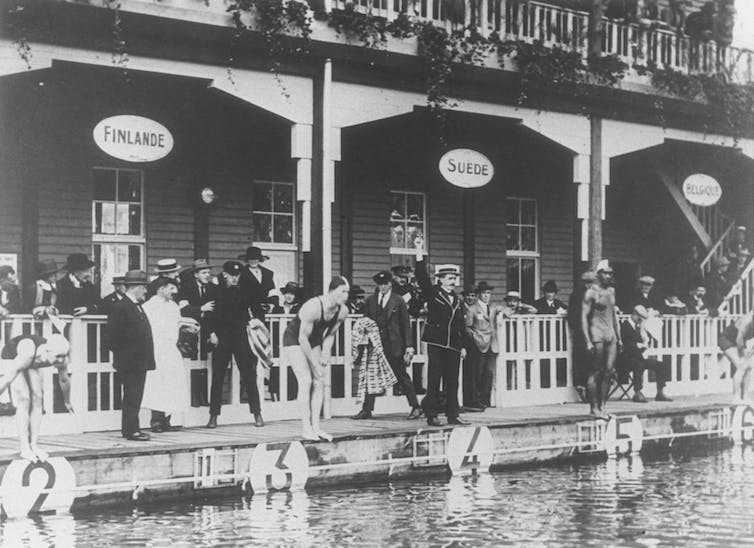 Swimming competition in a canal at the Antwerp Olympics. (Duke Kahanamoku is in lane 5). Wikimedia Commons

Despite these hardships, Belgians reported a successful Olympiad. The IOC’s report called the games a noble cause, but admitted that “for Belgians the success was relative”.

According to the IOC, one of the lessons they learned was

how expensive it was to host the games [and] that it is imprudent to undertake them without having the necessary capital in hand.

In the rush to host the 1920 games, the IOC, local organisers, and other national committees made avoidable and costly mistakes.

Unfortunately, as the long history of politicised and costly Olympics has shown, some of these mistakes were doomed to be repeated.

Read more: The Tokyo Olympics are going ahead, but they will be a much compromised and watered-down event