On Monday night, former Liberal MP Julia Banks spoke to Laura Tingle on 7.30. In the detailed interview about her new book, Power Play, she described how Scott Morrison’s office began backgrounding against her when Banks told the prime minister she was quitting politics and making it public.

The spin allegedly put on the story was that she had a “complete sort of emotional breakdown” and had not “coped” with the coup that saw Malcolm Turnbull replaced by Morrison in 2018.

By the time Banks’ announcement reached the media, the narrative was already set. When Morrison fronted journalists he merely had to express concern for “Julia” — a sly signalling that Banks was mentally unstable.

What am I doing right now? I’m supporting Julia and I’m reaching out to Julia and giving her every comfort and support for what has been a pretty torrid ordeal for her.

Banks told Tingle the prime minister was “very good” at “controlling the narrative” and constructing her as “this weak petal that hadn’t coped”.

The history of hysteria

Words associated with madness and emotion are frequently applied to women to discredit them and undermine their authority.

Because it is often so subtle — expressing itself as an apparently genuine concern — it can be easy to dismiss. And yet it plays to stereotypical perceptions of women as irrational and hysterical. This is one of the most insidious tactics used in all walks of life to deny women power and agency.

It is also part of the repertoire of gaslighting — a tactic used to dismiss women as disproportionately emotional or crazy, in a way that silences and controls them, denying them access to power. It has gained new prominence during the #metoo movement. When women speak out — the refrain from those in power is victims have somehow “misread” a situation.

Gaslighting in workplaces doesn’t have the obvious hallmarks of sexual harassment or bullying. But for exactly this reason, it is incredibly effective. It is the woman — not the situation — that is claimed to be the problem. It is the woman — not the culture — that needs to be “fixed”. Try to call it out and the perpetrator is extremely well placed to declare themselves the “victim”.

Other subtle tactics revealed in Banks’ interview on 7.30 included repeatedly calling the 50-something MP (and former corporate lawyer) by her first name “Julia”. 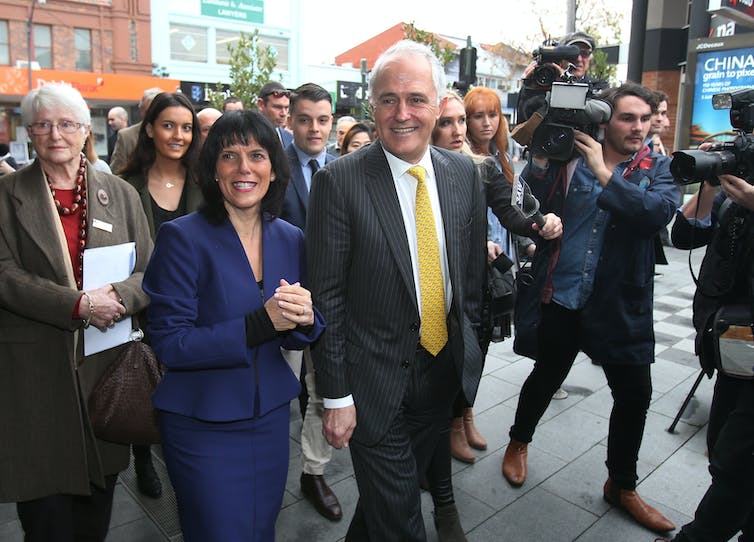 Banks was elected to the Victorian seat of Chisholm in 2016, in a surprise win for the Coalition. David Crosling/AAP

This functions not only as a claim to intimacy, supporting Morrison’s alleged knowledge of the state of Banks mental health, but also as infantalisation. Morrison once referred to professor Alison McMillan, as “chief nurse Alison”, while reserving the accolade of “professor” for chief medical officer Paul Kelly. It relegates well-credentialled women to the status of a “girl”.

Banks says she was dragged through “this sexist spectrum narrative” when it came to the backgrounding against her. On top of being emotionally weak, she was also criticised by colleagues for speaking out against bullying in the party and for eventually going to the crossbench.

I was this weak overemotional woman, to the bully bitch

All of these stereotypes play to pre-existing cultural assumptions about women’s relationship to power.

This kind of undermining is extremely difficult to combat. If the victim speaks out, she will be told that she is over-reacting, that she is over-sensitive. Treasurer Josh Frydenberg allegedly told Banks she could take a break from Canberra and do a stint at the United Nations. Banks says,

it would have got me out of the parliament because they basically wanted to silence me.

Banks, with decades of experience working in male-dominated professions, thought she could see what Morrison and his colleagues were doing. But it is much easier to call out overt acts. If diffuse and low-level untruths are repeated constantly, the danger is the public starts believing that there must be something wrong.

Banks description of Morrison as “menacing, controlling wallpaper” is an apt description of the tangible and intangible barriers that so many aspiring women face.

And so it continues

A key question is why hasn’t this angle in Banks’ story attracted more attention? Up to now, media coverage of her new book has largely focused on an incident of “inappropriate touching” that occurred in the Prime Minister’s Office, when a member of the Turnbull cabinet allegedly touched Banks’ leg, then ran his hand up her inner thigh.

While this is obviously worth serious attention, it is not the whole story.

In a statement, Morrison’s office “absolutely rejected” the content of his conversations with Banks. The spokesperson said the prime minister had “several conversations with her to understand what she was going through”. And that she had been offered “support”.

And so the subtle campaign of sexist denigration continues in plain sight.