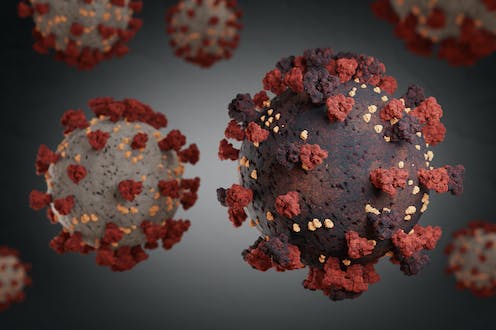 Last month, the Indian government detected a new mutation in the Delta coronavirus variant, prompting it to classify it as a variant of concern.

The Indian health ministry classifies a variant as one of concern as soon as there’s evidence for increased transmission.

Read more: What's the difference between mutations, variants and strains? A guide to COVID terminology

This mutation was found in samples from 48 people infected with the Delta variant in India, out of more than 45,000 samples.

So how is this variant different, and can it escape vaccine protection?

Remind me, what’s the Delta variant?

The more infectious Delta variant of the coronavirus has spread across the globe and is on track to become the world’s dominant strain, according to the World Health Organization.

The variant has been the dominant strain that led to the crippling second wave in India.

How is the ‘plus’ variant different?

The new mutation in the Delta variant was first detected in Europe in March.

In June, COVID patients in India were also found to have the mutant virus. These developments have raised concerns.

Some scientists in India fear the mutation may fuel another wave of infections in the country.

The mutation in the spike protein of the virus, however, is not new. Known as “K417N”, it has been previously reported in the Beta variant first found in South Africa. The Beta variant with this mutation has shown an ability to escape the antibodies conferred by COVID vaccination, at least to some extent. In other words, there’s the possibility COVID vaccines will not protect against this mutation so effectively.

Will vaccines work against Delta plus?

According to the Indian health ministry, Delta plus could have a similar ability to evade immunity and an ability to reduce the effect of monoclonal antibody therapies used to treat COVID.

The mutation is worrying because it’s located on a key portion of the virus, the spike protein, used to penetrate human cells.

Previous mutations have been on the “receptor binding domain” of the spike protein that allows the virus to attach to the receptors in our cells.

The unique mutations in the Delta variant mean the virus can escape the immune system to some extent. Indeed, Delta has shown to reduce efficacy of vaccines somewhat. This means a single dose of vaccine may offer reduced protection.

However, a second dose has been shown to produce enough antibodies against symptomatic infection and severe disease. It’s important to remember most COVID vaccines don’t provide absolute sterilising immunity, but work to reduce the severity of disease.

UK researchers found the Pfizer vaccine had an efficacy of 33% against Delta after a single shot, and 88% after both doses. In the case of the AstraZeneca vaccine, the efficacy was just 33% after the first dose but went up to 60% after the second dose.

The Delta plus variant might have a similar degree of reduction in efficacy against the vaccines currently in use. Though we’re yet see good data on whether this is the case.

Studies are under way in India to assess the effectiveness of vaccines against Delta plus.

It’s important to note Delta plus hasn’t yet taken off substantially, and the World Health Organization hasn’t yet classified it as a variant of concern.

What do we need to do now?

Variants with increased transmissibility and the potential to escape antibodies pose a threat to efforts to control and mitigate the pandemic. And countries with low vaccination rates may see new outbreaks.

How should our response change? Despite the mutations, no extra special measures need to be taken. We must continue to get maximum numbers of people vaccinated, increase genomic surveillance to track the evolution of the virus, and follow COVID-appropriate behaviour.