A new Western Australian study, one of the first of its kind, reveals the complex experiences of those living at the intersection of being both Indigenous and part of the LGBTIQ+ community.

Two reports produced as part of this Healthway-funded Breaking the Silence project are based on data insights from a survey of health care professionals and focus group sessions of health services and 63 Indigenous LGBTIQ+ community members.

This research was conducted by Indigenous LGBTIQ+ researchers and led by Edith Cowan University’s Kurongkurl Katitjin Centre for Indigenous Education and Research.

This research found many Indigenous LGBTIQ+ people feel a strong sense of pride in who they are and their unique position in being able to challenge misconceptions about being Indigenous in queer communities and queer in Indigenous communities. Being able to support younger people as they negotiate these intersections was also fulfilling.

While many queer Indigenous people value the ability to educate others about this complex identity position, this responsibility can also be burdensome.

For Aboriginal and Torres Strait Islander people, including those in the queer community, dating apps also present particular challenges. Many participants indicated they purposefully do not mention they are Indigenous in seeking to form online connections within the LGBTIQ+ community due to a fear of racism. 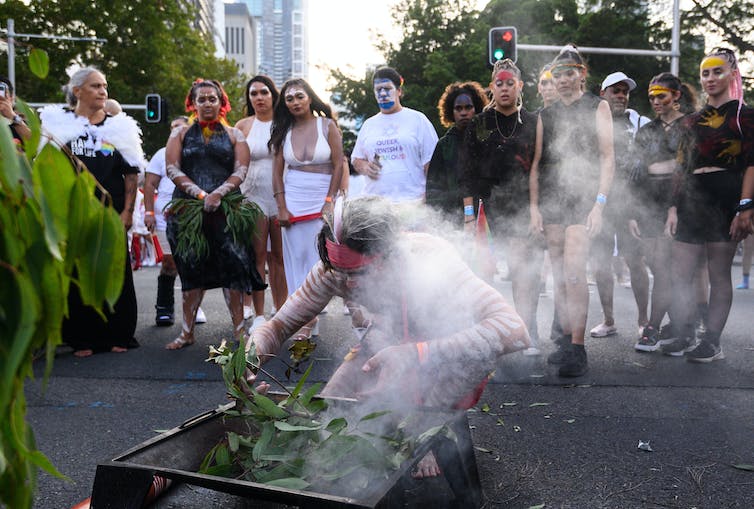 More than half of the participants felt little or no sense of connection to the LGBTIQ+ community as Indigenous people.

Participants also reflected on having to endure micro-aggressions from non-Indigenous queer people. Stereotyping and forms of “casual” racism – being told they don’t look Aboriginal or made to feel like a “token” inclusion – were common examples.

A key issue for a third of participants was the sense of invisibility they felt within Indigenous communities due to their sexual and/or gender identity.

Some chose to hide their sexual orientation for fear of not being accepted by Elders and community leaders. Interestingly though, Elders who engaged in the research were very supportive of promoting acceptance.

A desire to form connections with other queer Indigenous people was of great importance. Many participants also described the constant negotiation of identities, surveying risks, or hiding parts of one’s self as being exhausting.

A main focus of this research was Aboriginal and Torres Strait Islander/LGBTIQ+ peoples’ access to, and experiences with, a range of health, education, and social services.

This indicates more could be done by Indigenous health organisations to include Indigenous LGBTIQ+ people’s needs in their services.

All organisations that were surveyed expressed clear intentions to become better informed about the specific needs of Aboriginal LGBTIQ+ clients.

However, broader policy changes are also needed in health practices, including:

Both racism and queerphobia must be addressed for Indigenous LGBTIQ+ people to feel a sense of connection and belonging within their communities. Courageous conversations about discrimination in all organisations and the wider Australian society are well overdue.