Thousands of primary and secondary students in Sydney and Melbourne are preparing for selective entrance exams. If successful, students will gain entry into a selective secondary school, with other high-achievers, or an “opportunity class”, which is an academic stream for years 5 and 6 in a mixed-ability primary school.

But unlike regular government schools that prioritise students living in their catchment zone, selective schools enrol only the highest achieving students based on the outcomes of a competitive entrance exam.

Read more: School catchment zones may be annoying for some parents, but they help ensure equality for everyone

Selective schools are known for being consistently high-performing, producing some of the highest final-year secondary school outcomes. The chances of getting into a selective school depends on yearly demand. But are they actually worth it?

Why do families choose selective schools?

Parents are often drawn to them because their students produce good Australian Tertiary Admission Rank (ATAR) scores. These then ensure they can get into the university course of their choice.

Some migrant parents believe their education opportunities were limited or disrupted in their home countries, or during migration. When settled in Australia, these families may be drawn to high-performing schools that select talented and hard-working students.

Parents who have migrated to Australia from overseas also often cite a mix of high aspirations and anxiety about the future — related to university entry, job security and racial discrimination in the workplace — as their main reasons for choosing selective schools.

Selective schools aim to offer opportunities “for all” academically talented students, regardless of their social or cultural backgrounds, or where they live. They seek to enact the ethos of equal opportunity through various practices. For example, the entrance exam comprises aptitude style questions to test students’ natural abilities. And private tutoring to prepare for the entrance exams is discouraged.

Despite this, the types of students enrolled in selective schools are not representative of the population. Selective schools predominantly enrol socially advantaged students from ethnic minority backgrounds.

A recent review of selective schooling in NSW showed the admission processes provide better outcomes for advantaged students — 59% of applicants were from high socioeconomic backgrounds, or have at least one parent with a bachelor degree or above. The gap widens further on selection, with 64% of selected students considered to be in the high socioeconomic group.

So, these schools take hard-working students who have the advantages of extra tutoring. But do the schools, themselves, make a difference to individual students’ scores? 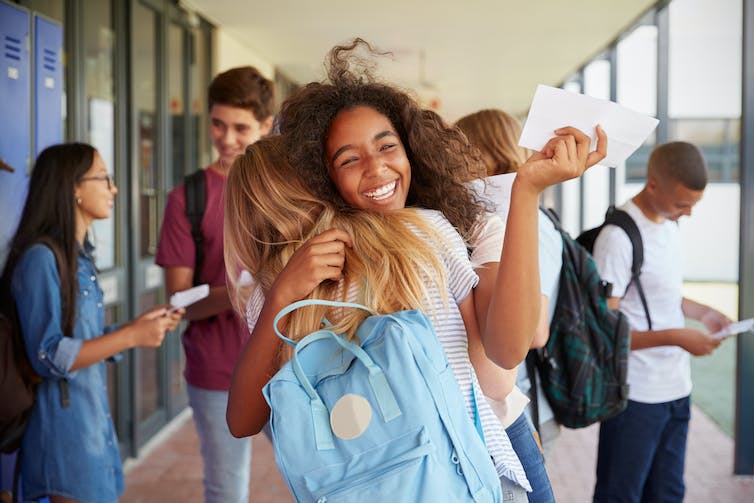 A study showed students who narrowly missed selective school entry scored very close in final exams to students who got in. Shutterstock

A recent working paper from the Centre for International Research on Education Systems explored how selective schools shape the socioeconomic composition and academic performance of non-selective schools in Sydney and Melbourne.

It compared the types of students enrolled in geographical “clusters” with one of each type of school: fully selective, partially selective, private and non-selective government schools. The schools were matched where possible in terms of student composition by sex and year levels to enable fair comparisons. The report included 80 schools — 64 in Sydney and 16 in Melbourne.

Read more: New South Wales has 48 selective schools, while Victoria has 4. There's an interesting history behind this

The report showed academic selection through selective school entry ends up with schools being stratified based on students’ social background and academic abilities.

Given socioeconomic status is a significant predictor of academic scores, it’s unclear whether selective schools would actually make a difference to individual students’ grades. What is clear is that academic selection produces social selection in schools, separating students from wealthy families from those who are of lower socioeconomic status.

Does competition make a difference?

Recent research of 14-year-old students in the United States highlighted competitive, stressful entrance exams — and repetitive testing — affects student well-being, confidence and sense of self when they aren’t selected.

For those who are successful, the process of competitive school entry encourages individualistic mindsets and self-protective actions. The study showed it also heightens racialised stereotyping and lowers empathy towards students who miss out on a place or are unable to compete.

Australian research shows selective school students often compare entrance exam results with others after enrolment. Those who are successful through second or third round offers carry a sense of failure with them into schools, knowing they were not picked first. These successfully selected but lower scoring students see themselves as lesser than first-picked students for many years after selection.

Choosing a selective over a non-selective school flows through to sustaining inequalities in society more broadly. In contrast, enrolling into local government schools and ensuring a mix of students from different socioeconomic backgrounds will help reduce social inequalities, ensuring fairer life outcomes for everyone.