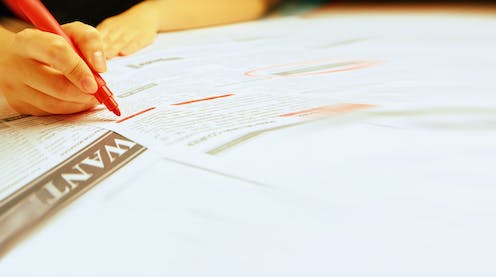 Under so-called mutual obligation rules, the Australian government requires the unemployed to complete activities (including training and applying for a certain number of jobs) in return for receiving unemployment benefits.

Failure to comply attracts demerit points which can lead to the loss of benefits.

Under so-called mutual obligation rules, the Australian government requires the unemployed to complete activities (including training and applying for a certain number of jobs) in return for receiving unemployment benefits.

Failure to comply attracts demerit points which can lead to the loss of benefits.

The goal is meant to be to help the unemployed return to work more quickly.

But do they? Academic literature provides several reasons to think they might not.

One is self-determination theory.

The argument is that there are two types of motivation: self-authored (intrinsic motivation) and enforced by others (external motivation).

Both types can spur action, but often only the former leads to success.

Remember your parents told you to do something, rather than you deciding for yourself? We’re guessing it mattered for the end result.

“Mutual obligations” and threats of penalties are external motivators. Self-determination theory says they are not likely to work well.

Another is scarcity theory.

The second part, scarcity theory argues, only works well if you have sufficient cognitive resources, or “bandwidth”, to use it.

The threat of penalties might create stress that uses up bandwidth that might otherwise be available for properly searching for jobs.

We followed the experiences of 6,253 unemployed Australians aged 15-65 who were part of the Household, Income and Labour Dynamics in Australia HILDA survey between 2001 and 2019.

Read more: The true cost of the government's changes to JobSeeker is incalculable. It's as if it didn't learn from Robodebt

In what we believe is the first study to assess the effects of Australia’s mutual obligations requirements on job search and employment outcomes, we compared the experiences of otherwise-similar Australians who were subject to mutual obligations with those who were not.

We matched those who were similar across about 30 dimensions and differed mainly in whether or not they were subject to mutual obligations.

Those under obligations take longer to find work

We found that those subjected to mutual obligations search just as intensively (if not more) for jobs, but that they took longer to find employment and spent less time in employment twelve months on.

Twelve months on those who had been on mutual obligations who were in employment were in lower quality jobs in terms of hourly wage, hours worked and weekly wage, than those otherwise identical Australians who had not been.

We conclude that mutual obligation as a labour market policy instrument fails the test of assisting unemployed Australians into jobs. Where it does, it gets them into jobs which aren’t as remunerative.

It is consistent with the theory that energy (“bandwidth”) spent on compliance, reduces the energy available to properly search.

It lends support to the theories of self-determination and scarcity (of bandwidth).

But they do not suggest this is sufficient for getting unemployed Australians into good jobs.

Read more: What happens when you free unemployed Australians from 'mutual obligations' and boost their benefits? We just found out

That will require sustained fiscal stimulus in excess of the kind the government is now providing to ensure there is enough work for everyone who wants work, including the 160,000 people presently underemployed.

Only then will we properly use our resources, and be able to provide a proper job for everyone who wants one.