Ed Kuepper has been making groundbreaking music for nearly 50 years. As a member of The Saints, and after the release of their first single (I’m) Stranded in 1976, he was flung from Brisbane’s suburban wasteland into the pre-punk mayhem of London.

(I’m) Stranded was reviewed in Sounds magazine as “Single of this and every week”, and The Saints signed to EMI. Kuepper’s journey as a serious songwriter had begun.

Three separate albums of Kuepper’s music have just been released on vinyl, gathered under the title The Exploding Universe of Ed Kuepper. There are two compilations — one of his work with post-Saints band The Laughing Clowns (1979-1985), another of singles from his life as a solo artist (1986-1996) — as well as a recent live recording of The Aints!, Kuepper’s vehicle for performing old Saints material as well as new work. 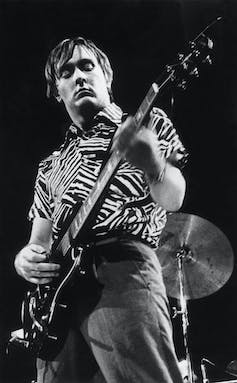 Three very different albums, but all ringing clearly with his voice and his vision.

The Laughing Clowns compilation — Golden Days When Giants Walked The Earth — beautifully evokes the energy and inventiveness of this critically acclaimed band.

Kuepper returned from London in the late 1970s with his family, and a desire to make something new. Back in Brisbane visiting his parents, and at a party in his honour, he was surprised by the presence of drummer Jeffrey Wegener and sax-man Bob Farrell. These two had come up from Melbourne with friend Ben Wallace-Crabbe and the inkling of a band was formed.

Kuepper had known Jeff at school, and Bob was around in the early days of The Saints, a band whose sound was based on a loose, 50s rock and roll feel. He wanted his next band to carry this vibe but looking more to 60s jazz. He remembers,

One of the big influences was actually a fairly unusual Tony Bennett album, The Beat of My Heart, where he had two or three drummers playing. I was interested in where things could go, rhythmically, and to pull the guitar back a bit.

The astonishing Clowns songs on Golden Days are all wrapped around the spine of Wegener’s drums and Kuepper’s guitar. The rhythms veer and slide, with changing time signatures; songs full of swing and sway, while melodies are juggled between voice, bass, piano and the saxophones of Farrell and later, Louise Elliot.

Kuepper thinks the band, for all its influences and many lineup changes, had a consistent sound; it “emerged fully formed on the first recording — I can’t think of too many other rock and roll groups that were like that”.

But nothing good lasts forever, and after one final tour with various band members falling prey to lifestyle choices while Kuepper valiantly tried to hold it all together, he collapsed The Laughing Clowns in the last days of 1984.

The second album in Exploding World gathers the singles from Kuepper’s solo work from 1986-1996. In 1989, on an August afternoon a month after my ejection from The Go-Betweens, I auditioned for his backing band, The Yard Goes On Forever. It was scary, I didn’t get the job, and I went out that night and got totally plastered. It’s entirely possible that I was under-prepared.

The singles, all 39 of them, show more shifts in Kuepper’s approach. Some elements remain, the brass sections and shuffly rhythms, but many others are new.

These are pop songs, catchy and melodic. The lyrics embrace the simplicity and purity of close relationships; his voice settles into his maturing creative life; and he takes the 12-string acoustic and places it in the centre of his sound, marrying it with choirs of women’s voices.

There are synths and sequencers and 60s fairground brass and Mellotrons. I have favourites, to be sure, from the couple of shows where I’ve played bass with Kuepper (at the Brisbane City Hall in 2009, and for Brisbane Festival in 2010). The Way I Made You Feel has all the slinky allure of a Prince track, while Everything I’ve Got Belongs To You is as good a love song as you can find.

But there is so much breadth here, such style: try La-Di-Doh, or Real Wild Life or Fireman Joe with its echoes of Max Merritt and Small Faces. There is a deep seam of wealth here, cultural treasure for all to share.

Fifteen years ago, in the evening of the day of Grant McLennan’s funeral, I ended up at a table at a restaurant at Brisbane’s Powerhouse. I found myself sitting opposite Kuepper and his wife Judy Dransfield. They were lovely company in the last chapter of this difficult, heightened day. I realised I barely knew Ed, but I liked him. And Jude.

About a year after that dinner, I enjoyed an afternoon playing banjo under their house in the Brisbane suburbs. Sitting upstairs later with Jude; cups of tea and biscuits. The banjo was for a track on Jean Lee and the Yellow Dog, a family project. Says Kuepper:

We collaborated quite strongly on that album, where [Jude] wrote all the lyrics. Prior to that she’d done photography, and art and stuff like that, but [Jean Lee] was a really interesting thing — a good thing to have done.

Judy Dransfield’s distinctive artwork for his record covers, her photographs and her presence are all intrinsic to what we know of Kuepper.

The third album — The Aints! Live — captures the band (including Peter Oxley from The Sunnyboys and Paul Larsen, from Celibate Rifles) before recording their 2018 studio album The Church of Simultaneous Existence. They have that loose rock and roll feel Kuepper loves, wrapped up in energy and thunder.

Five years ago, as part of a fairly shambling, ongoing attempt to do something about Brisbane’s cultural heritage, I applied to the state government for money to commemorate the 40th anniversary of the release of (I’m) Stranded. We won the grant, and a mural was commissioned.

More importantly, there was money to stage a live show with The Aints!, where songs from 40 years earlier were revived and hammered out, within a hundred metres of The Saints’ old practice room.

Kuepper seemed pleased with the attention, though it’s sometimes hard to tell …

Ed Kuepper and Jim White have embarked on a national tour. They will perform at the Sydney Opera House on June 13.

Quotes in this story are from the author’s chat with Kuepper in mid-May.