The word “reparations” comes from the Latin verb reparāre, meaning “to repair.” However, nowadays, many people equate reparations with the payment of compensation or damages.

We need to understand and embrace the true meaning of the word and start to have genuine conversations about reparations for LGBTQ people — a group that has endured a long and painful history of persecution around the globe.

A brief history of gay persecution

Perhaps the most high-profile persecutions of gays were those perpetrated by the Nazis during the second world war. Thousands of gay men were sent to concentration camps where they were forced to wear a pink triangle and ultimately killed.

But the history of gay persecution predates the Holocaust, and has continued after the Nazi regime ended.

From the 12th century, gays in Christian Europe were castrated, decapitated, drowned in swamps and burned at the stake. And in modern times, the state-sanctioned killing of LGBTQ people continues in many countries, including Iran and Saudi Arabia.

There are still 71 countries that criminalise consensual gay sex — half of which are Commonwealth nations — but thankfully this number is going down. 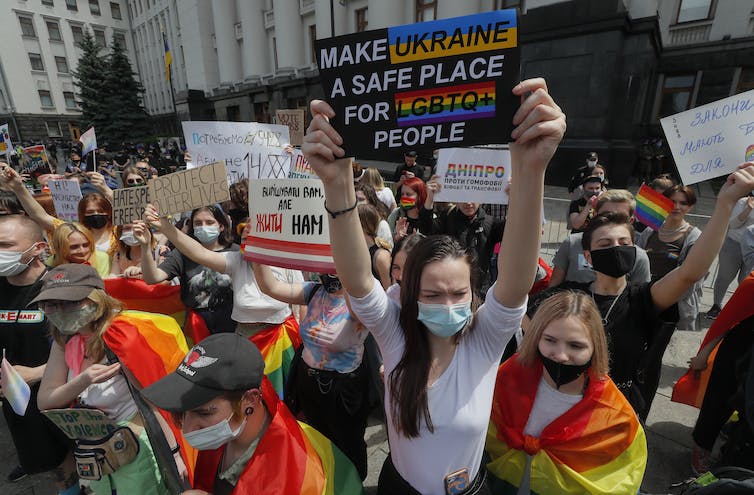 A rally in Ukraine last weekend to demand a stop to violence against LGBTQ activists, feminists, and others deemed a threat to so-called ‘traditional values’. Sergey Dolzhenko/EPA

What are gay reparations?

There are numerous forms that gay reparations can take. They often entail a formal government apology to the LGBTQ community for past wrongs and a promise to do better in the future.

They can also include memorialising the victims of state-sponsored repression of gays, as Germany did in 2008 when it unveiled a memorial to gay victims of the Holocaust.

Gay reparations often include pardons to those convicted of the “crime” of being gay.

In 2017, for instance, the UK issued posthumous pardons to thousands of gay and bisexual men convicted of “gross indecency” in the past, including Alan Turing, the mathematician who famously broke the Germans’ Enigma codes during the second world war. He committed suicide two years after he was convicted for “acts of gross indecency”, based on his relationship with Arnold Murray, and underwent chemical castration.

Occasionally, gay reparations can involve financial compensation for wages or pensions lost due to time spent in prison or a mental institution because of a homosexual offense. Such compensation has been available in Spain since 2009 and in Germany since 2016.

Read more: Calls for a posthumous pardon ... but who was Alan Turing?

What are the arguments against gay reparations?

There is strong resistance to the idea of gay reparations in some countries, especially the United States.

Some of the opposition is rooted in run-of-the-mill homophobia. Statistics show a rise in hate crimes against LGBTQ people in recent years in many countries, including the UK and Germany. Homophobic hate speech by politicians is on the rise in many places, and in Poland, nearly 100 localities have declared themselves “anti-LGBTQ” zones. 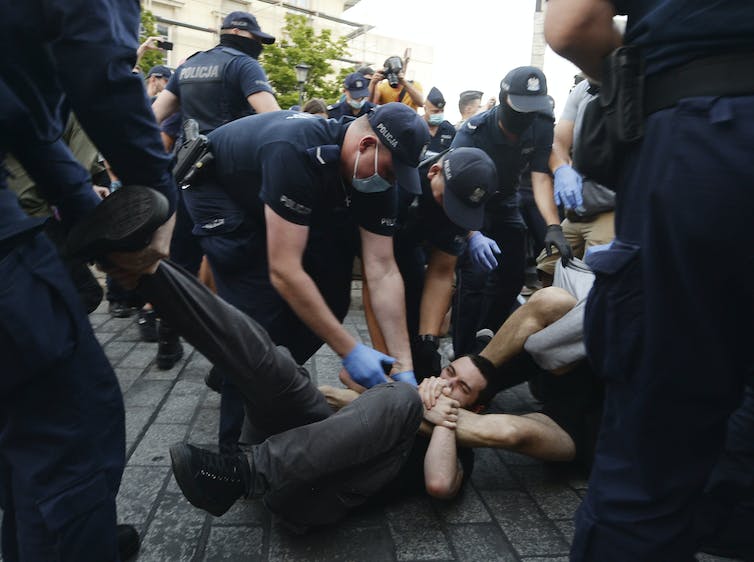 Police scuffle with LGBTQ protesters at a rally against the arrest of an LGBTQ activist in Poland last year. Czarek Sokolowski/AP

Encarnacion systematically refutes each of these arguments, noting that critics of gay reparations are misinformed about the purpose of acknowledging and repairing the wrongs perpetrated against LGBTQ people.

Their arguments rely on stereotypes and flawed comparisons between gays and other groups that have been persecuted (especially African Americans), and generally show a lack empathy for the gay community.

There is a clear trend towards countries decriminalising homosexuality with Bhutan, Angola, Gabon, Botswana, Mozambique, the Seychelles and Trinidad and Tobago all abolishing these laws in recent years.

While these reforms are welcomed, they are merely the start of the journey towards equality for LGBTQ people — not the end. It is time all countries acknowledge and offer reparations for the mistakes of homophobic laws that have targeted gays and destroyed millions of lives.

Australia provides a useful model. In 2016, Victorian Premier Daniel Andrews, in a world first, apologised for the homophobic laws of the past in his state. In a moving speech he said,

There was a time in our history when we turned thousands of ordinary young men into criminals. And it was profoundly and unimaginably wrong. […] This parliament and this government are to be formally held to account for designing a culture of darkness and shame. […] We are so sorry. Humbly, deeply, sorry.

This apology came after laws were enacted in the state of Victoria expunging convictions for homosexual conduct. And it has been followed by other landmark actions, including the enactment of laws banning “conversion therapy” and the construction of the first Pride Centre in Australia to support the LGBTQ community.

Reparations like this must be the ultimate goal. As the writer and philosopher Michael Bassey Johnson once observed:

Sometimes, the mistake is not the problem; the lack of remorse is the real mistake.