People living near the coast are familiar with the power of ocean waves.

What we see when a typical wave breaks on a beach is the endpoint of a global energy conversion story. It starts with the sun’s heat driving winds whose energy generates ocean waves which grow and often travel thousands of kilometres.

In this way, the ocean collects an enormous amount of energy. There’s enough energy in waves coming ashore that every metre of coastline could power around five average homes, and much more during storms.

Capturing this energy is not a new idea, but one that faces many challenges. Our research illustrates the potential of enlisting biology in a reversal of the typical marine engineering view that “bio-fouling is bad”.

Instead, it looks possible to use the added drag generated by allowing marine organisms to grow on a “naked” wave energy extractor.

This model shows marine organisms could be used in wave energy extraction. Video by Christian Fischer.

The continuing interest in innovations in wave power is because most economies now have targets to reduce greenhouse gas emissions over the coming decades. New Zealand has promised to reduce net emissions of all greenhouse gases (except methane from livestock) to zero by 2050.

Clearly better energy efficiency is paramount. There is no point investing in clean energy supply and then wasting it, because no form of energy generation is without impact.

Read more: New Zealand wants to build a 100% renewable electricity grid, but massive infrastructure is not the best option

Solar and wind power are the fastest growing forms of renewable supply globally, but this puts increasing pressure on valuable land. And during times of high demand, the variability of optimal wind and solar conditions is a challenge.

With two thirds of our planet covered in seawater, capturing the energy embodied within ocean waves and tides makes a lot of sense. While some tidal energy technology is now commercially viable, wave energy is following a more convoluted trajectory, with many options for how the conversion actually happens.

New Zealand excels in marine innovation in extreme yachting and aquaculture, but there is almost no maritime engineering focused on marine energy generation, despite having an exclusive economic zone 15 times larger in area than the country’s landmass.

Regardless of the design, wave energy converters are vulnerable to damage in inevitable storms. Despite this challenge, current technologies like the Wello Penguin are getting close to being able to produce energy at a cost comparable with other renewable energy generation methods.

What has really pushed the marine renewable energy field forward in the last decade has been the growth of offshore fixed-foundation wind farms. This has been a game changer as it socialised the marine setting and, through scale, increased the economic viability of the supply chain. 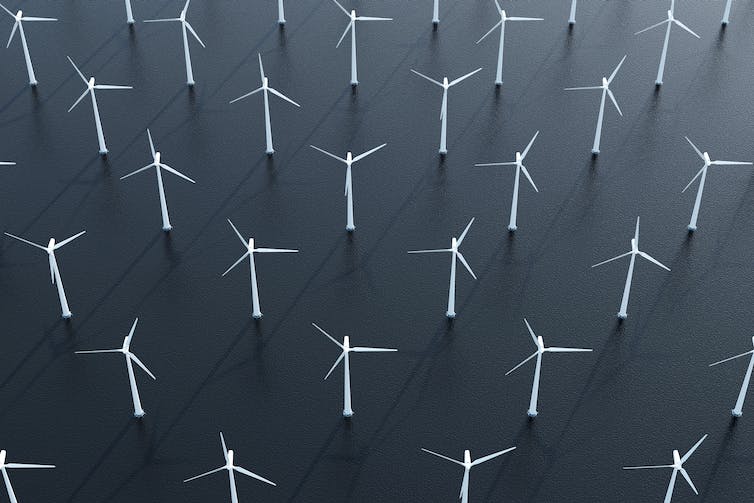 It is common to look to nature to help in environmental design. Energy converter designs are often inspired by nature, with ideas ranging from nodding ducks to sea snakes. Some designs get more serious in how they use biomimicry.

Read more: The US just set ambitious offshore wind power targets – what will it take to meet them?

Our research explores a hybrid solution, combining physics and biology, as a pathway for future marine energy.

The Bio-Oscillator looks at how species like large macroalgae and mussels could be integrated into the submerged structure of a wave-power generator. This is possible because parts of the structure are required only to add drag and inertia and experience only relatively little motion during operation. 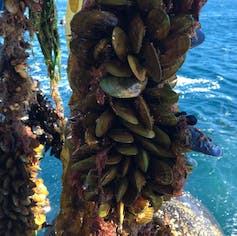 Using local species of algae or mussels has several benefits. They grow and regenerate naturally and, importantly, will have only limited impact if they are damaged during storms.

It is also common to look at ways to connect renewable energy sources to existing ocean infrastructure such as navigation buoys or aquaculture farms. Approaches like the Bio-Oscillator could generate both a harvestable crop of shellfish or macroalgae — as well as producing renewable energy.

The United Nations decade of ocean science for sustainable development is a perfect setting for exploring the many opportunities that now exist to reduce energy emissions and, in doing so, head off the forecast threats caused by our present way of living.