Japanese tennis star Naomi Osaka took a stand this week that called attention to the mental health of professional athletes. She refused to conduct interviews with the media after her matches at the French Open, citing concerns over her own mental well-being.

And, in return, the tennis authorities fined her and threatened her with further action before she ultimately pulled out of the tournament.

There are two sides to this story. On the one hand, this is part of the contract, it’s part of the deal. Tennis players get paid millions of dollars and in return they have to do media interviews whether they win or lose.

The issue is when you have somebody like Osaka, who is by her own admission an introverted person with high social anxiety. She essentially hates doing this stuff but knows she has to.

If there was ever a public cry for help, this is it. She’s talked about suffering bouts of depression since she won the US Open in 2018, how she wears headphones to try to cope with her social anxiety to stay in her own little bubble.

She knew that if she lost at the French Open again, there would be a forensic examination of her inability to win on clay that would just reinforce her own self-doubt. So, she decided not put herself through that.

I find it disappointing that the sport has adopted the stance it has. The authorities have basically taken a hard line with her — you’re contracted to do this, and you have to do it or risk further fines and possible disqualification.

Tennis has been here before

During the 11 years in which I worked in professional tennis, I was asked to be on a commission that looked at the potential threat to the well-being and mental health of players from turning professional at too young an age.

This was in the era when 13 and 14 years olds like Jennifer Capriati and Tracy Austin were playing in Grand Slams and struggling to cope with the pressures.

And the tennis authorities took the mental health of these players so seriously, they established the age eligibility commission with experts from all around the world to meet at Wimbledon for four days to discuss what could be done.

They made very fundamental changes to the rules — dictating how many tournaments a player can enter at a certain age — and it proved to be to the enduring benefit of the players.

Osaka is asking for a very simple thing in comparison: can we just review the rules around the interviews that players are contracted to do?

Players who have just come off the court after often crushing and demoralising defeats are required within 30 minutes to front up to the media. There’s a sense of voyeurism around how it presently works; perhaps some want to see athletes crumble and break down into tears, having put them on a pedestal.

Some athletes are viewed by the public as spoiled and overpaid, but this is an unfair assessment of Osaka. She is a young, introverted, anxious person. We should by now understand that sports stars are not super human, that they have the same doubts and mental health issues as everyone else.

But given the reaction Osaka has received from some quarters, this appears not to be the case. 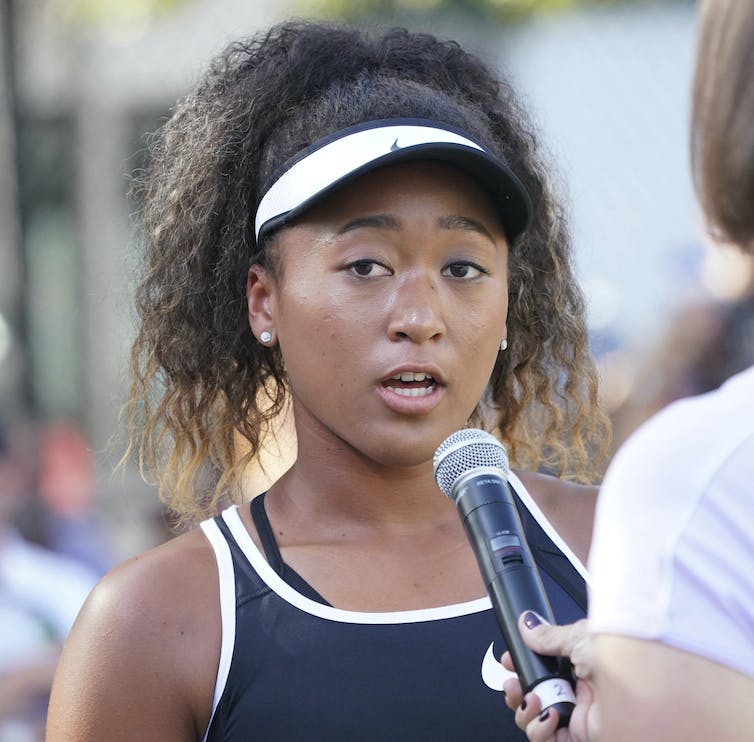 Dealing with depression in the spotlight

As Serena Williams has expressed today, not everyone relishes the attention of being famous:

Not everyone is the same. I’m thick. Other people are thin […] You just have to let her handle it the way she wants to.

When it comes to the media, some players just don’t think so well on their feet. They’re used to hitting a ball very well, they’re not necessarily great wordsmiths.

Some players get very frustrated being asked the same question they’ve already answered many times before. Or questions that are sufficiently intrusive about their own mental approach to the game to challenge their self-confidence.

When your natural personality type is such that you’re an introvert and prone to anxiety, it’s an additional challenge when you reach a high point very early in your career. It involves a massive learning curve.

For Osaka, there is also the greater issue of struggling with depression, which she alluded to in her statement.

The last thing you want when you’re dealing with depression is to be in the spotlight. You want to be with the people who love you unconditionally and with whom you can share your feelings and not be judged. You may need professional support.

The media don’t meet those criteria. So trying to deal with serious mental health issues in the glare of publicity is next to impossible.

All of this is heaping more and more demands on Osaka. There are considerable forces pushing her toward even greater levels of anxiety. Could you imagine the level of expectations on her at the Tokyo Olympics?

We are talking about the mental health of young athletes more now than we used to. It’s true, sports stars are privileged elites, but the prevalence of mental health issues in sports, especially anxiety, is approximately the same as it is in society. And across their careers, between a quarter and a third will have some mental health issue, whether it becomes public or not.

We should understand that we can’t treat young vulnerable people as commodities, telling them to just follow the rules and not to express their concerns.

What Osaka wants is a dialogue around a small change to how tennis players interact with the media. The tennis authorities will likely agree to that now she has taken a stand, but sadly, it may have come at an enormous cost to her.

Read more: Athletes won't stay silent on politics anymore. But will leagues support their protests if it costs them real money?