With just 60 days to go until the start of the Tokyo Olympics, there are more questions than answers about how such a massive event will take place as the COVID-19 pandemic continues to rage in many parts of the world.

Japan itself is struggling to contain a fourth wave, with a seven-day average of new cases briefly topping 6,000 earlier this month. Hospitals are overrun in the city of Osaka and a state of emergency has been extended in Tokyo and other areas.

The vaccine rollout, meanwhile, continues to lag behind most other major economies, with just 4% of the population having received one or two doses. 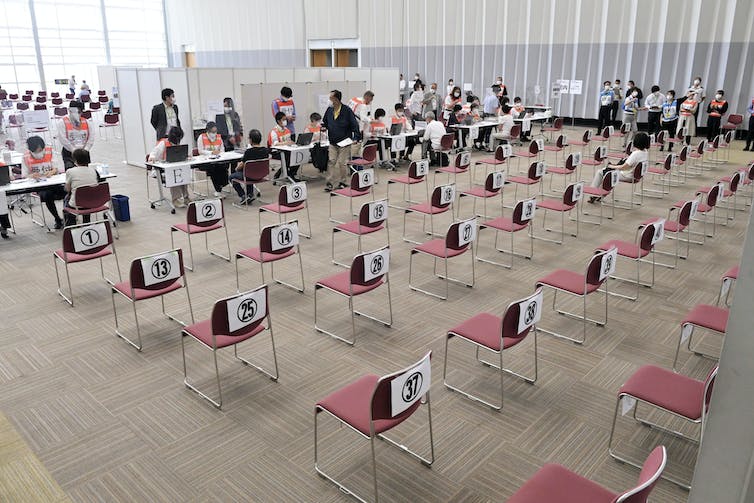 With the Olympics approaching, Japan is trying to speed up its vaccination rollout. Kyodo News/AP

The key Olympic stakeholders are all sporting a brave face, insisting they are receiving the best possible advice from Japanese health authorities and the World Health Organisation and putting in place the proper protective measures.

The games will likely go ahead, but they will be more watered down compared to the spectacles of years past. This is what a very compromised Olympics could look like.

No sightseeing or sex (though condoms are on offer)

The second version of the Tokyo 2020 Playbook was recently released, with a third draft expected by June. This spells out clearly and in great detail what is expected in terms of COVID testing and restrictions.

For example, although a vaccination will not be compulsory, everyone will be tested extensively both before and during the games. Attendees will only be permitted to eat in designated settings and allowed limited movement and social interaction in Tokyo. Sightseeing and using public transportation is strictly forbidden. 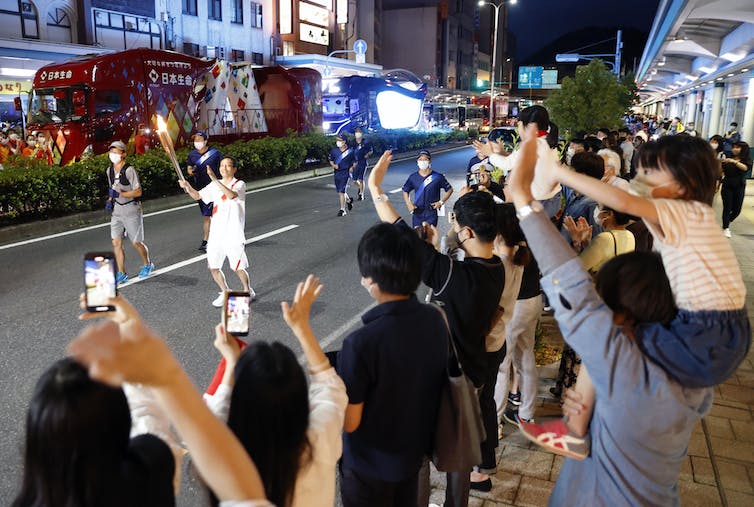 The torch relay is continuing across Japan, albeit in front of sparse crowds — and in some places, no crowds at all. KYDPL KYODO/AP

Significantly, each delegation will also have a “COVID liaison officer” to ensure all the rules are being followed, which includes keeping tabs on athletes seemingly at all times.

Within the Olympic Village, interactions between athletes will also be greatly restricted. The rules say no hugging, high-fives or sex, though confusingly, the organisers still plan to distribute 150,000 condoms. (This is at least far less than the Rio Games, when a record number of 450,000 condoms were on offer!)

Ensuring compliance of the rules will be a herculean task. The organisers warn that athletes who violate the rules will not be allowed to compete, will have their accreditation cancelled and must depart the Olympic Village. Yet, it’s likely some athletes will try to beat the system, particularly once their event is over.

Another concern is the 78,000 volunteers, the majority of whom will not be vaccinated and will have limited protections in the way of basic cloth masks, hand sanitiser and guidelines on how to socially distance.

It seems a strange oversight there is not a specific “playbook” for volunteers, just a brief pamphlet on prevention measures.

A sterile atmosphere — and a financial hit for Japan

International spectators will not be permitted. And there is no certainty Japanese fans will be allowed to attend, either. A final decision is expected in June.

So, what will the atmosphere be like without large flag-waving crowds? And if those able to attend are prohibited from cheering, singing or whistling? (Clapping is acceptable.)

The opening and closing ceremonies will no doubt be more subdued affairs, with perhaps no spectators, reduced team sizes and even the possibility of only a flag bearer for each nation marching in the stadium. A decision is expected in June.

Read more: Should Japan cancel the Tokyo Olympics? It may not be able to

During a normal Olympics, the host city is always abuzz with many non-sporting attractions, as well, such as the popular Olympic hospitality or partner venues set up by various nations and specialised groups.

In 2016, there were 52 of these in Rio, with 24 open to the public. The other 28 were restricted venues for national Olympic committees and their athletes, officials and sponsors, but they were nevertheless an important sideshow.

Most of these have been cancelled in Tokyo, leaving one less avenue for the Japanese public and athletes to interact during the Olympics.

One of the most popular of these venues is Heineken House (affiliated with the Dutch Olympic Committee and its beer sponsor), but this iconic “party house” will not be found in Tokyo. It hosted 4,000 visitors a day in Rio.

Traditionally, major sponsors and other companies also offer extensive corporate hospitality programs for visitors. Coca-Cola, for instance, brings in thousands of guests – many from overseas – who receive complimentary event tickets, flights, accommodation, and food and beverages.

The absence of all of these crowds and amenities will certainly diminish the Olympic spirit in Tokyo. It will be a money-loser for the hosts, too.

One study estimated staging the Olympics without spectators will result in a US$23.1 billion loss for Japan — both in terms of direct spending linked to the games, and indirect economic effects from household consumption and tourism.

Has drug testing been compromised?

Another concern is the absence of drug testing in the lead-up to the games, due to the pandemic. Mack Horton, an Australian swimming gold medallist, said he wasn’t drug tested for nine months during the worst of the pandemic last year, though out-of-competition has reportedly picked up again at the start of 2021.

Drug testing has been, at best, inconsistent during the pandemic. Well-resourced countries with strong national anti-doping agencies have kept up their rigorous testing procedures, while other countries reliant on regional agencies have not.

However, the International Testing Agency, an independent body that will handle the anti-doping program at an Olympics for the first time, has pledged a robust approach in the weeks leading up to the games.

The World Anti-Doping Agency has also said it will trial a new form of drug-testing at the games themselves using a small amount of blood from a pricked finger.

Can the Olympic movement survive the setback of the pandemic and the prospect of a diplomatic boycott of the Beijing 2022 Winter Games due to rising concerns about human rights in China? The games are indeed at a crossroads. What happens with the Tokyo Games may well set the direction for the future of this elite competition.