Advances in medical technology have dramatically altered the process of dying. It’s now possible to prolong life, with the frightening reality that this may simply extend our dying process.

Advance care planning is designed to empower us to retain some control over the last stages of our life by communicating our wishes about what we want, or don’t want, in terms of medical treatment. Generally this planning is done in well in advance of a medical crisis, while people are well.

However, evidence suggests these plans may not work as intended in a crisis, because the message the patient thought to be crystal clear appears unclear to doctors and family.

Read more: Only 25% of older Australians have an advance care plan. Coronavirus makes it even more important

Let’s go through an example

The following is a mix of several similar real world patients, but names and some specific details have been altered to avoid identifying any particular case.

“Doug Jones” was a 75-year-old man with severe Parkinson’s disease that was making it increasingly difficult for him to manage at home, even with lots of help.

Doug’s swallowing had became progressively more difficult due to his disease, to the extent that Doug’s doctors had advocated for placement of a PEG feeding tube. This would be a tube through his tummy wall directly into his stomach, so he could be fed without swallowing. Doug had declined this on the grounds that eating and drinking were “about the last pleasure I have”. He recognised the risk of choking to death, but didn’t care.

Weeks later Doug was admitted to hospital after choking on a piece of orange. The orange had totally obstructed his airway, resulting in severely low levels of oxygen in the blood and cardiac arrest. It was over 30 minutes before the piece of orange was able to be removed.

On arrival in hospital, tests suggested Doug had suffered profound brain damage due to very low oxygen delivery. However, at this early stage, while it was reasonable to have grave concern, it was not possible for doctors to be certain about the outcome.

Well before all this happened, Doug had written an advanced care directive. This is a document that states Doug’s preferences for future medical care, should he lose the capacity to make decisions. In this he stated:

I do not want to be any worse than I am now; I do not want heroic treatment and I never want to go into a nursing home.

Read more: End-of-life care: no, we don't all want 'whatever it takes' to prolong life

After reading the advance care directive, the doctors explained they could not predict with certainty how things would turn out. They explained Doug would need to be kept on life support for some days, to give him “the best chance” and to “see how things go”.

As days passed it became clear Doug had suffered profound brain injury. He did start to breathe for himself but required hoist transfers and assistance with all activities of living, including turning, bathing and toileting. He remained non-verbal and was fed through a nasogastric tube. Occasionally he appeared to understand what was being said to him.

After six weeks, Doug was discharged from hospital to a high level nursing home.

When we reviewed what happened, the doctors who had looked after Doug agreed this outcome was, in all probability, exactly what Doug feared and wanted to avoid. They felt it was very sad. 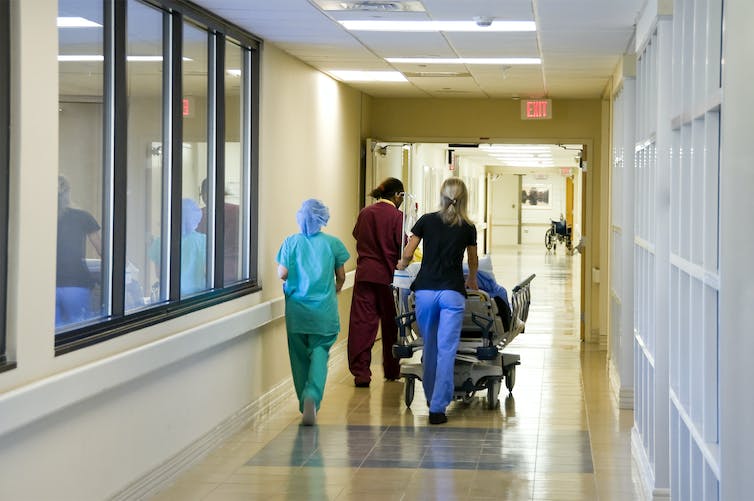 It can be very challenging for doctors to interpret and act on advance care directives, often because it’s almost impossible to predict exactly how treatment will affect a patient. Shutterstock

Like so many, Doug had stated outcomes he didn’t want. He said “I do not want to be any worse than I am now. I would never want to go into a nursing home”.

However, as Doug’s doctors pointed out, they could not be certain when they first saw him exactly what the outcome would be (though it was very likely to be bad).

When asked if, when they first saw Doug, they had thought there was any real chance he would return to his previous level of function, they were unequivocal. None of them thought he would.

So how can we explain these conflicting answers?

The initial thought process the doctors applied focused on whether there was certainty of a particular outcome, but certainly is something that’s impossible to predict with absolute confidence. In contrast, risk is much easier to recognise. Had Doug asked doctors (and family) that he did not want to take the risk of an unacceptable outcome it would have made it much easier for them

Read more: Do you want to be resuscitated? This is what you should think about before deciding

A second problem is that, like many patients, Doug stated things he “does not want”. There are lots of things in life we don’t want, but that we endure. The important question is not what we don’t want, but what we won’t accept and wouldn’t consent to.

Doug also wrote his plan a bit like an instruction. A lot of people do this thinking an instruction will be more convincing, but it doesn’t work like that.

Instructions written well in advance of the event, before all the circumstances are known, can be very unreliable. Most doctors can cite many examples of patients who have totally changed their mind when faced with a crisis.

Here are some tips when writing yours

Doctors and family members feel very uncomfortable faced with instructions from someone who is no longer able to explain their reasoning. This disquiet makes them question whether the instructions are well informed, adequately thought through, applicable to the situation, and firmly held. An emotional request generally inspires more confidence.

I know it won’t be easy, but I ask my family and doctors to respect my wishes should they have to decide about treatment for me.

Focusing on unacceptable risk and lack of consent, as well as adding an appeal for wishes to be respected, speaks to the heart and creates the sort of confidence doctors and families need to make difficult decisions.