If asked where meteorites come from, you might reply “from comets”. But according to our new research, which tracked hundreds of fireballs on their journey through the Australian skies, you would be wrong.

In fact, it is very likely that all meteorites — space rocks that make it all the way to Earth — come not from icy comets but from rocky asteroids. Our new study found that even those meteorites with trajectories that look like they arrived from much farther afield are in fact from asteroids that simply got knocked into strange orbits.

We searched through six years’ worth of records from the Desert Fireball Network, which scans the Australian outback for flaming meteors streaking through the sky. None of what we found came from comets.

That means that of the tens of thousands of meteorites in collections around the world, likely none are from comets, leaving a significant gap in our understanding of the Solar System.

When the Solar System formed, more than 4.5 billion years ago, a disc of dust and debris was swirling around the Sun.

Over time, this material clumped together, forming larger and larger bodies — some so large they swept up everything else in their orbit, and became planets.

Yet some debris avoided this fate and is still floating around today. Scientists traditionally classify these objects into two groups: comets and asteroids.

Asteroids are rockier and drier, because they were formed in the inner Solar System. Comets, meanwhile, formed further out, where ices such as frozen water, methane or carbon dioxide can remain stable — giving them a “dirty snowball” composition.

The best way to understand the origin and evolution of our Solar System is to study these objects. Many space missions have been sent to comets and asteroids over the past few decades. But these are expensive, and only two (Hayabusa and Hayabusa2) have successfully brought back samples.

Read more: The Hayabusa2 spacecraft is about to drop a chunk of asteroid in the Australian outback

Another way to study this material is to sit and wait for it to come to us. If a piece of debris happens to cross paths with Earth, and is large and robust enough to survive hitting our atmosphere, it will land as a meteorite.

Most of what we know about the Solar System’s history comes from these curious space rocks. However, unlike space mission samples, we don’t know exactly where they originated.

Meteorites have been curiosities for centuries, yet it was not until the early 19th century that they were identified as extraterrestrial. They were speculated to come from lunar volcanoes, or even from other star systems.

Today, we know all meteorites come from small bodies in our Solar System. But the big question that remains is: are they all from asteroids, or do some come from comets?

Read more: Asteroid dust brought back to Earth may explain where our water came from with hydrogen clues

In total, scientists around the world have collected more than 60,000 meteorites, mostly from desert regions such as Antarctica or Australia’s Nullarbor Plain.

We now know most of these come from the main asteroid belt – a region between Mars and Jupiter.

But might some of them have come not from asteroids, but from comets that originated in the outer reaches of the Solar System? What would such meteorites be like, and how would we find them? 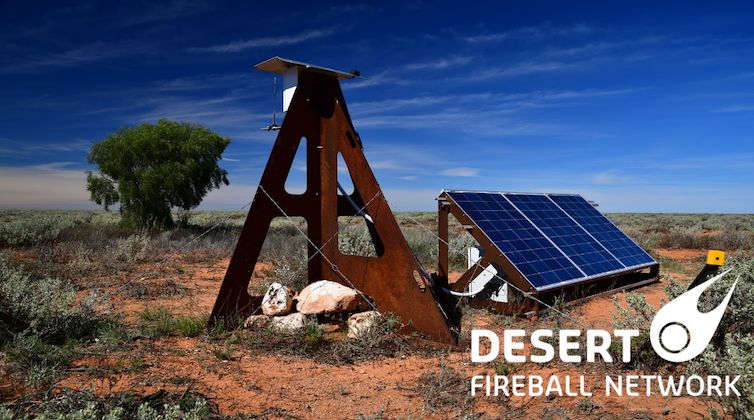 Fortunately, we can actively look for meteorites, rather than hoping to stumble across one lying on the ground. When a space rock is falling through the atmosphere (at this stage, it’s known as a meteor), it begins to heat up and glow — hence why meteors are nicknamed “shooting stars”.

Larger meteors (at least tens of centimetres across) glow brightly enough to be termed “fireballs”. And by training cameras on the sky to spot them, we can track and recover any resulting meteorites.

The largest such network is the Desert Fireball Network, which features around 50 cameras covering more than 2.5 million square kilometres of the Australian outback.

The network’s data has resulted in the recovery of six meteorites in Australia, and two more internationally. What’s more, by tracking a fireball’s flight through the atmosphere, we can not only project its path forwards to find where it landed, but also backwards to find out what orbit it was on before it got here.

Orbital data of debris in the inner Solar System detected by the Desert Fireball Network between 2014-2020.

Our research, published in The Planetary Science Journal, scoured every fireball tracked by the DFN between 2014 and 2020, in search of possible cometary meteorites. In total, there were 50 fireballs that came from comet-like orbits not associated with a meteor shower.

Unexpectedly, despite the fact that just under 4% of the larger debris was from comet-like orbits, none of the material featured the hallmark “dirty snowball” chemical composition of true cometary material. 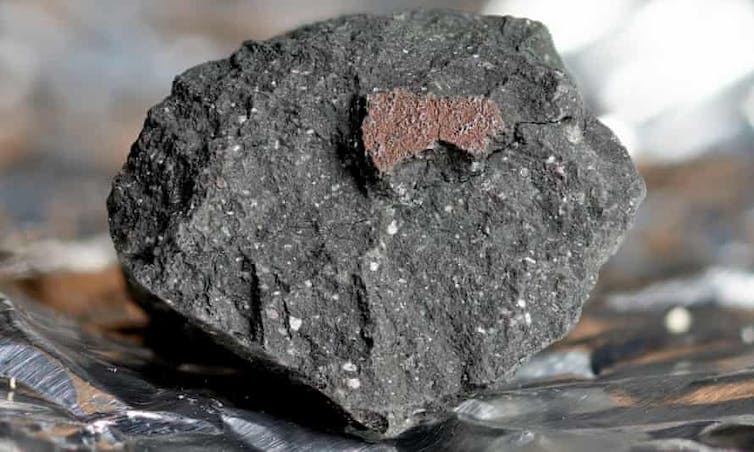 A meteorite fragment recently found in the Cotswolds town of Winchcombe. Researchers at Curtin University worked with collaborators in the UK to help recover this rare carbonaceous meteorite.

We concluded that debris from comets breaks up and disintegrates before it even gets close to becoming a meteorite. In turn, this means cometary meteorites are not represented among the tens of thousands of objects in the world’s meteorite collections.

The next question is: if all meteorites are asteroidal, how did some of them end up in such weird, comet-like orbits?

For this to be possible, debris from the main asteroid belt must have been knocked from its original orbit by a collision, close gravitational encounter, or some other mechanism.

Meteorites have given us our most profound insights into the formation and evolution of our solar system. However, it is now clear that these samples represent only part of the whole picture. It is definitely an argument for a sample-return mission to a comet. It’s also testament to the knowledge we can gain from tracking fireballs and the meteorites they sometimes leave behind.