This week, a returned traveller who was quarantining in South Australia seems to have been infected with the virus during his stay, before testing positive once returning to Melbourne. It’s the latest in a long line of hotel quarantine leaks in Australia.

And in this week’s federal budget, the government has committed to welcoming back over 17,000 Australians stranded overseas over the next year, which will likely place more pressure on our hotel quarantine system.

In light of the seemingly continued spillover of hotel quarantine infections into the community, one researcher raised an intriguing possibility online: should we vaccinate all arrivals on day one of their stay in hotel quarantine?

There may be reasonably high vaccination rates among our arrivals already. But, if not, it’s definitely something worth thinking about.

In my view, overseas travellers should be considered equivalent to frontline workers, as they traverse the routes into Australia and cross through border quarantine. Therefore, they could be included in phase 1a of the vaccine rollout alongside these frontline workers.

It’s complex and there’s a lot to take into account, and vaccinating all arrivals won’t be the magic fix to our hotel quarantine troubles. But it might take the edge off some of the transmission risks.

You only have to prevent one case, which could have otherwise led to community spread and lockdown, for such a scheme to pay for itself many times over.

Here’s how it could work.

There are a number of potential ways this strategy could reduce infection risk, by:

A Public Health England study found that a case who has had a single dose of either the Pfizer or AstraZeneca vaccine is up to 50% less likely to pass the virus on to their close household contacts.

However, when the researchers looked more closely at the timing, they found the full 40-50% reduction in transmission risk only occurred when the case received their first dose five or six weeks before becoming infected. In fact Pfizer didn’t reduce the transmission risk cases posed to others unless the first dose was given at least 14 days before the case became infected. In other words, giving returned travellers a dose of Pfizer while in quarantine might be too late to protect others.

In saying that, the same study shows AstraZeneca’s vaccine does appear to at least partly reduce the transmission potential of cases even when the dose is given on the same day that person was infected.

In those who’ve received the AstraZeneca vaccine on day zero of their infection, the chance of them transmitting the virus to their close contacts over the ten days or so they’re infectious was on average roughly 20% lower than positive cases who weren’t vaccinated.

Getting the AstraZeneca vaccine when exposed to the virus, or soon after, might therefore marginally protect the wider population if, for example, a traveller contracts the virus late in quarantine and it isn’t picked up in day 12 testing and is released from quarantine.

Both vaccines also appear to reduce the risk of subsequently dying from COVID-19 with an 80% reduction in deaths reported in the UK. Some in this study were infected within seven days of their first vaccine dose, but we do not know how this effectiveness against deaths changes with time since vaccination from this report.

Nevertheless, there might be some additional value in offering vaccines to both slightly reduce transmission rates and mitigate against serious illness and death in people who do become infected. 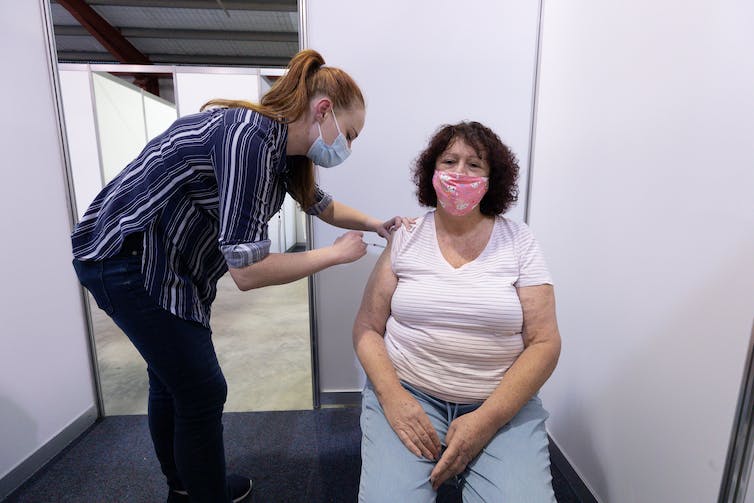 Both Australia’s current COVID vaccines offer some protection within 12 days of the first dose. This might give some protection to people who pick up the virus inside hotel quarantine. Richard Wainwright/AAP

One challenge is that AstraZeneca has more to offer in reducing transmission risk in the first critical two weeks after receiving the first jab, but Australia currently doesn’t advise it for people under 50. Pfizer is in limited supply and our vaccine rollout phase 1a and 1b recipients haven’t all been fully vaccinated yet. The relative risks and benefits of reallocating some of our vaccine supply and delivery must be carefully thought through.

Many of those arriving in Australia will likely have opted for vaccination before travel, if available to them, even if just to increase their chances of testing negative and being allowed to board their flights home. Many are arriving from countries that began their vaccination programs months before Australia.

How many returnees are already vaccinated?

The number of positive cases in hotel quarantine has grown month on month, from 160 in February to 469 in April.

New South Wales provides the most detailed information on returned travellers. Its latest surveillance report on about 21,000 returnees shows 180, or 0.8%, tested positive to COVID-19. About 75% of these positive cases tested positive by day two, suggesting they were exposed before arriving in Australia or in transit.

Read more: More than a dozen COVID leaks in 6 months: to protect Australians, it's time to move quarantine out of city hotels

We haven’t been provided the overall vaccination rates for returnees across Australian hotel quarantine, so we can’t yet work out what percentage of arrivals are vaccinated. But if this is quite low, it strengthens the argument for offering vaccines to travellers on arrival.