In this series we pay tribute to the art we wish could visit — and hope to see once travel restrictions are lifted.

The appreciation of art is enriched through experience, and there is perhaps no greater experience than travel. But while landmark destinations, such as Carnegie Hall or Glyndebourne, are wonderful to visit, it can be paradoxical to travel for music.

Music is less tangible than other art-forms — like architecture or painting — and is often hard to pin down. Where exactly “is” music? Can it be embodied within one place? If one searches for it, where exactly does one end up?

As a classical pianist, I’ve been searching for Polish composer and piano virtuoso Frédéric Chopin since my early teens.

Read more: Performing Beethoven - what it feels like to embody a master on today's stage

The journey began after inheriting a dog-eared volume of piano pieces which featured Eugène Delacroix’s well-known portrait of the composer on the cover. I later learned that the painting hung on the walls of the Musée de Louvre, so when I first visited Paris I searched for it.

Chopin had arrived in Paris after leaving Poland in 1830. A fierce nationalist, the failure of the November Uprising against Russian occupation meant he was unable to return. Subsequently, he made Paris his home, dying there at the tragically young age of 39. 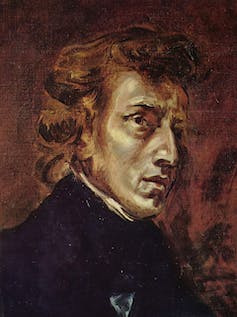 A section of Eugène Delacroix’s 1838 portrait of Chopin. Wikimedia Commons/Louvre

Today, it is a challenge to see Paris as he would have known it. Some of the half-dozen homes where he lived no longer exist. This is also true of the original Salle Pleyel, where Chopin gave rare public performances. While the grand boulevards seem quintessentially Parisian, the construction of Georges-Eugène Haussmann’s elegant urban design post-dates the composer’s death.

Yet, in Chopin’s day the Louvre was already established as a museum. When I visited, I fairly much ignored the great masterpieces by Titian, Caravaggio, Vermeer, and da Vinci. At last, I found the room in which the Delacroix portrait was hung. But I was, sadly, disappointed: it had been removed for repair. My search would continue.

Delacroix’s portrait has another story to tell. It is cut from a larger, unfinished canvas, which depicted Chopin with George Sand (the pen name of Aurore Dupin), a novelist as famed for her literary works as for wearing men’s clothing and smoking cigars. For eight years Chopin and Sand were romantically linked, yet their relationship ended acrimoniously. (Perhaps fittingly, Sand’s portion of the painting now hangs in Copenhagen.)

From Sand’s autobiographical Winter in Majorca, we have a chronicle of their four-month stay on the island of Majorca in Spain, among many valuable glimpses of the composer at the beginning of their romance. The trip to warmer climes was for Chopin’s “delicate” health, yet an unseasonably cold and wet winter likely exacerbated the tuberculosis that later killed him.

At first, the setting was idyllic, with Chopin writing joyfully in letters home about the “palms, cedars, cacti, olives, and pomegranates”. Yet the unmarried couple grew frustrated with the religious conservatism of locals and, when the composer’s ill health was assumed to be contagious, they retreated to the Carthusian Monastery at Valldemosa.

The imposing stone building is today about 25 minutes’ drive from Palma, yet in Chopin’s time the journey north through mountainous terrain was taken perilously by carriage. He described his room there as being like a cell “in the shape of a tall coffin”. According to Sand, he also believed it was haunted. 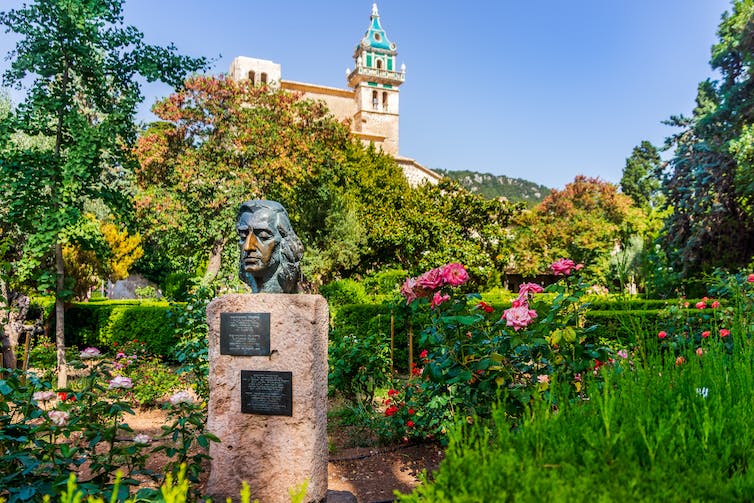 Chopin’s bust in the grounds of Valldemossa’s monastery, Spain. Shutterstock

Yet some of his most inspired pieces appear to have been created there, like the so-called “raindrop” prelude. Sand recounted returning to the monastery late at night, finding Chopin “pale, at the piano, wild-eyed, his hair standing almost straight up”. He imagined that he had been drowned in a lake, with the repetitive notes of the piece representing “heavy and icy raindrops” falling on his chest.

My own journey resumed when I had the opportunity to visit Majorca in my late 20s. I enjoyed better weather, with winter sunshine bringing warmth and colour. Chopin’s room itself is now a museum, and in a corner stands the fine Pleyel piano which arrived, with cruel timing, only shortly before he left.

Off his room is a long terrace which overlooks a deep valley. While imagining Chopin enjoying the view, I watched as a bank of dense mist rolled incongruously up the slope. A minute later it had enclosed me, and the place was grey and silent.

‘He passed away with his gaze fixed on me,’ remembered Chopin’s daughter Solange.

The relationship between Chopin and Sand dissolved after an argument over her daughter, Solange. While the couple would never again speak, Solange remained loyal until his death in 1849. Years later she recounted his final moments:

We wanted to give him a drink, but death prevented us. He passed away with his gaze fixed on me […] I could see the tarnishing in his eyes in the darkness. Oh, the soul had died too! 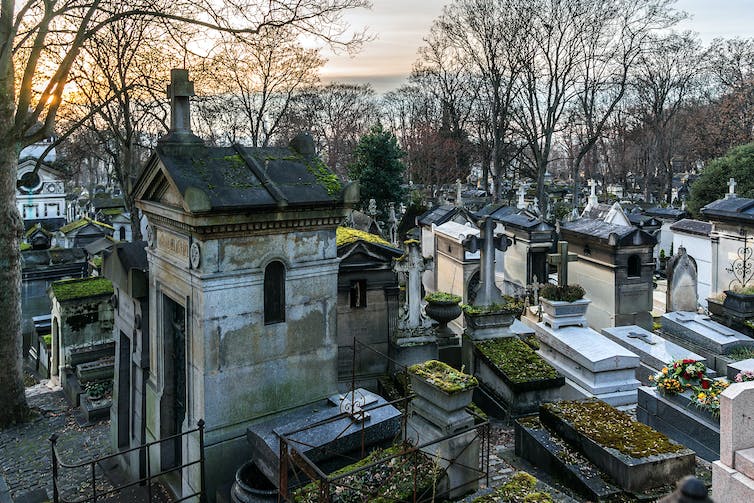 Appropriately, my search for Chopin concludes with a visit to the cemetery of Père Lachaise, where artist Delacroix had been among the composer’s pallbearers. After looking at the graves of Rossini, Oscar Wilde, and Jim Morrison, my companions and I looked for the final resting place of Chopin.

We walked in silence, but on finding the place — marked by a statue of the muse Euterpe weeping over a broken lyre — I asked what they’d thought of the piano music that had played in the distance. I thought that it seemed like a composition by Chopin, but couldn’t place it.

Yet they hadn’t heard a thing, and to this day I can’t account for the strange occurrence. In such a place, perhaps the mind plays tricks.

Audiences expect performers to do more than play the notes; they expect insight and personal conviction. For me, tracing Chopin’s footsteps has contributed to that conviction and, certainly, these experiences have enriched his music to me.

But, as with all travel, the urge continues. And if I could go anywhere now, I’d keep on searching.