CC BY-ND Climate Explained is a collaboration between The Conversation, Stuff and the New Zealand Science Media Centre to answer your questions about climate change. If you have a question you’d like an expert to answer, please send it to climate.change@stuff.co.nz I’ve heard the gravity changes when Antarctica melts will lower the seas around New Zealand. Will that save us from sea level rise? The gravitational changes when Antarctica melts do indeed affect sea levels all over the world — but not enough to save New Zealand from rising seas. The ice ages and their effects on sea level, geology, flora and fauna were topics of intense scientific and public interest all through the 19th century. Here’s how James Croll explained the “gravity effect” of melting ice in his 1875 book Climate and Time in their Geologic Relations: Let us now consider the effect that this condition of things would have upon the level of the sea. It would evidently tend to produce an elevation of the sea-level on the northern hemisphere in two ways. First, the addition to the sea occasioned by the melting of the ice from off the Antarctic land would tend to raise the general level of the sea. Secondly, the removal of the ice would also tend to shift the earth’s centre of gravity to the north of its present position – and as the sea must shift along with the centre, a rise of the sea on the northern hemisphere would necessarily take place. His back-of-the-envelope calculation suggested the effect on sea level from ice melting in Antarctica would be about a third bigger than average in the northern hemisphere and a third smaller in the south. A more detailed mathematical study by Robert Woodward in 1888 has falling sea level as far as 2000km from Antarctica, but still rising by a third more than average in the north. Read more: Ancient Antarctic ice melt caused extreme sea level rise 129,000 years ago – and it could happen again Sea-level fingerprints Woodward’s method is the basis of determining what is now called the “sea-level fingerprint” of melting ice. Two other factors also come into play. The elasticity of the earth’s surface means the land will bounce up when it has less ice weighing it down. This pushes water away. If the ice is not at the pole, its melting shifts the south pole (the axis of rotation), redistributing water. Combining these effects gives the sea-level fingerprints of one metre of sea-level rise from either the West Antarctic Ice Sheet (WAIS) and Greenland (GIS), as shown here:

Fingerprints of sea-level change following melting of ice from West Antartica (WAIS) and Greenland (GIS) equivalent to one metre of sea-level rise on average. Red areas get up to 40% more than the average sea-level rise, blue areas get less. Author provided, CC BY-SA Woodward’s method from 1888 holds up pretty well – some locations in the northern hemisphere can get a third more than the average sea level rise. New Zealand gets a little bit below the average effect from Antarctica, and a little more than average from Greenland. Overall, New Zealand can expect slightly higher than average sea level rise. Combining the sea-level fingerprints of all known sources of melting ice, together with other known changes of local land level such as subsidence and uplift, gives a good fit to the observed pattern of sea level rise around the world. For example, sea level has been falling near West Antarctica, due to the gravity effect. 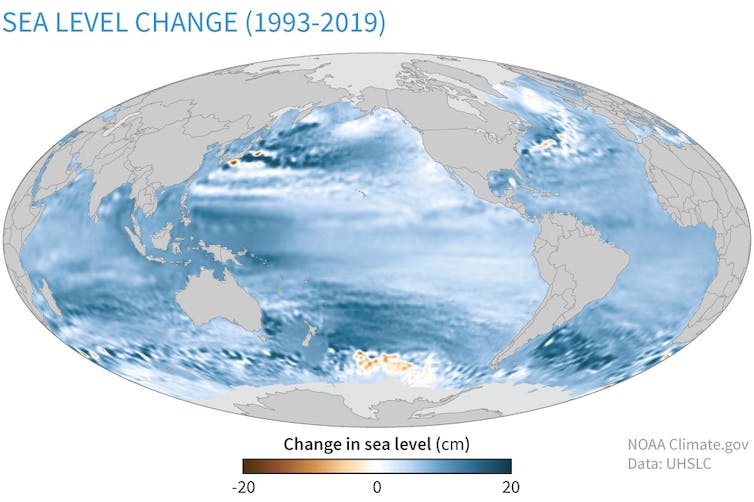 NOAA Sea-level rise is accelerating, but the future rate is uncertain The global average rise in sea level is 110mm for 1900-1993 and 100mm for 1993–2020. The recent acceleration is mostly due to increased thermal expansion of the top two kilometres of the oceans (warm water is less dense and expands) and increased melting of Greenland. But the Gravity Recovery and Climate Experiment satellite has revealed the melting of Antarctica has accelerated by a factor of five in recent decades. Future changes in Antarctica represent a major source of uncertainty when trying to forecast sea levels. Much of West Antarctica lies below sea level and is potentially subject to an instability in which warming ocean water melts the ice front from below. This would cause the ice sheet to peel off the ocean floor, accelerating the flow of the glacier towards the sea. In fact, this has been directly observed, both in the location of glacial “grounding lines”, some of which have retreated by tens of kilometres in recent decades, and most recently by the Icefin submersible robot which visited the grounding line of the Thwaites Glacier, 2000km east of Scott Base, and found the water temperature to be 2℃ above the local freezing point. Read more: If warming exceeds 2°C, Antarctica's melting ice sheets could raise seas 20 metres in coming centuries The big question is whether this instability has been irreversibly set into motion. Some glaciologists say it has, but the balance of opinion, summarised by the IPCC’s report on the cryosphere, is that: Observed grounding line retreat … is not definitive proof that Marine Ice Sheet Instability is underway. Whether unstable West Antarctic Ice Sheet retreat has begun or is imminent remains a critical uncertainty. The IPCC special report on 1.5℃ concluded that “these instabilities could be triggered at around 1.5℃ to 2℃ of global warming”. What’s in store for New Zealand Predictions for New Zealand range from a further 0.46 metres of sea-level rise by 2100 (under a low-emission scenario, with warming kept under 2℃) to 1.05 metres (under a high-emission scenario). A continued rise in sea levels over future centuries may be inevitable — there are 66m of sea level rise locked up in ice at present — but the rate will depend on how fast we can reduce emissions. A five-year, NZ$7m research project, NZ SeaRise, is now underway, seeking to improve predictions of sea-level rise out to 2100 and beyond and their implications for local planning.