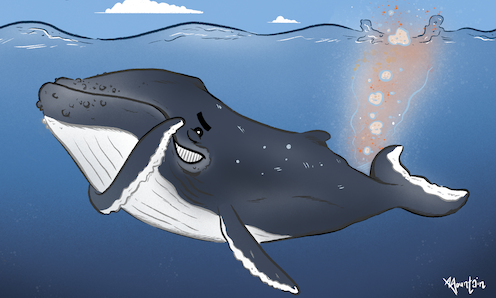 I’ve waited a long time for a question like this! I usually talk about whale snot for my research (yes, whales have snot), and I’m so excited to look into this, too.

I’ve waited a long time for a question like this! I usually talk about whale snot for my research (yes, whales have snot), and I’m so excited to look into this, too.

Yes, whales do fart. Can you imagine the size and bubbles of a fart from the world’s biggest animal, the blue whale?

I’m yet to experience this, but I know of some lucky scientists who have seen a humpback whale fart. They tell me it looks like bubbles coming out underneath its body near the tail. That’s where the whale bum is — the smellier blowhole.

Whales are mammals, just like us. This means they breathe air, give birth to live young, provide their young with milk and have hair, usually in the form of whiskers around their mouth. They also have digestive processes to help break down their food.

Read more: Curious Kids: What sea creature can attack and win over a blue whale?

Unlike us, whales don’t chew their food but swallow it whole. Baleen or toothless whales, for example, use long hair-like structures to feed on krill and fish. Their food is later broken down across four stomach chambers.

As their bodies break this food down (via stomach acid), it produces gases, which are released as farts and eventually poo.

In fact, whale poo is one of the coolest looking in the animal kingdom. Blue whale poo can be bright orange!

Back to the top end: do whales sneeze?

The short answer, no.

Unlike us, whales need to think about breathing. When they want to take a breath, they need to swim to the surface. If they don’t, they could drown.

This means whales also sleep differently to us. They can rest different parts of their brain at a time, and take naps before rising to the surface to breathe.

And unlike us, they can’t breathe through their mouth and instead use their blowhole or nose to breath. This is like having an inbuilt snorkel on top of their head.

This makes it much easier for them to swim, breathe and eat — all at the same time. And they don’t have to worry about food going down the wrong way as their air and lung passages are separated.

We sneeze automatically and involuntarily if something tickles our nose. If whales get something caught in their noses, they could clear it using a big exhale through their blowhole, like blowing their nose. This would serve a similar function to our sneezing. 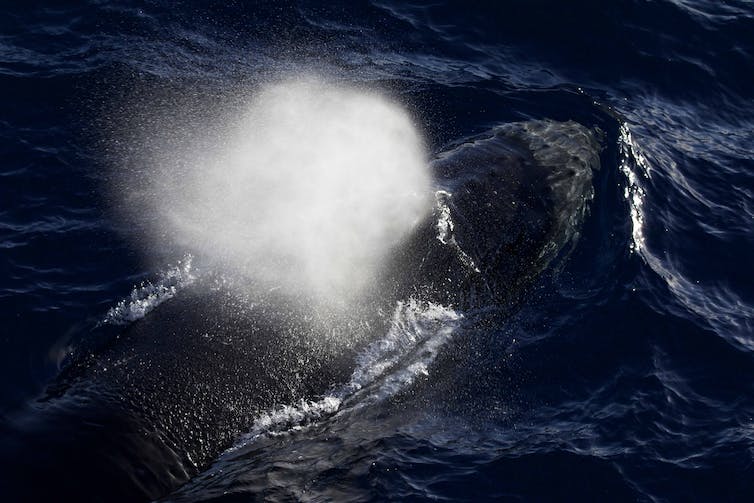 BUT, if a whale were to sneeze…

It would be big! For comparison, an adult human’s lungs can hold around six litres of air. But a humpback whale can hold over 1,000 litres — that’s a lot of bubbles!

As a scientist, I use drones to sample whale snot to learn more about whale health.

We found the whales off Sydney didn’t even know their snot was being collected through this method. This is much safer for the whales and us as researchers as we don’t need to get close to each other.

Well there you have it, we’ve covered both ends of a whale. They’re incredible creatures who do enormous farts — thanks for the question!