Around one in three (36%) Australian children grow up in families experiencing adversity. These include families where parents are unemployed, in financial stress, have relationship difficulties or experience poor mental or physical health.

Our recent study found one in four Australian children experiencing adversity had language difficulties and around one in two had pre-reading difficulties.

Learning to read is one of the most important skills for children. How easily a child learns to read largely depends on both their early oral language and pre-reading skills. Difficulties in these areas make learning to read more challenging and can affect general academic performance.

What are language and pre-reading difficulties?

International studies show children experiencing adversity are more likely to have language and pre-reading difficulties when they start school.

Language difficulties are usually identified using a standardised language assessment which compares an individual child’s language abilities to a general population of children of the same age.

Pre-reading difficulties are difficulties in the building blocks for learning to read. For example, by the age of five, most children can name at least ten letters and identify the first sound in simple words (e.g. “b” for “ball”). 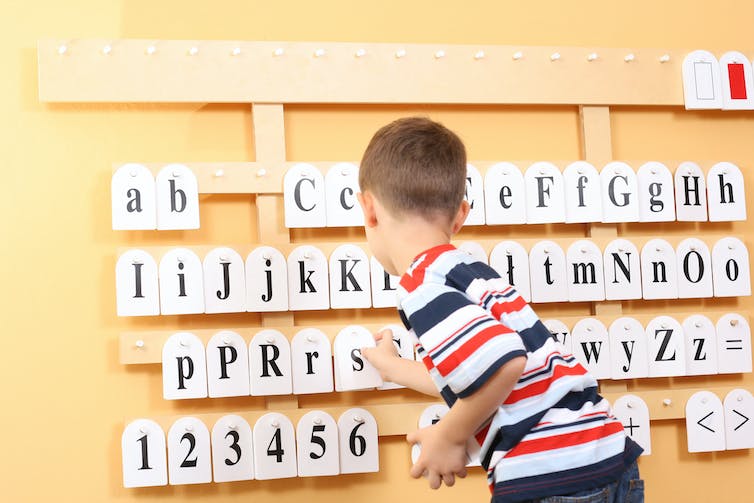 Most five year old children can name at least ten letters and identify the first sound in simple words. Shutterstock

Children who have not developed these skills by the time they start school are likely to require extra support in learning to read.

1 in 4 children in adversity had language difficulties

We examined the language, pre-reading and non-verbal skills (such as attention and flexible thinking) of 201 five-year-old children experiencing adversity in Victoria and Tasmania.

But our rates were more than double this — one in four (24.9%) of the children in our sample had language difficulties.

Pre-reading difficulties were even more common: 58.6% of children could not name the expected number of alphabet letters and 43.8% could not identify first sounds in words.

By comparison, an Australian population study of four year olds (children one year younger than in our study) found 21% could not name any alphabet letters.

Again, our rates were more than double this.

Interestingly, we didn’t find these differences for children’s non-verbal skills. This suggests language and pre-literacy skills are particularly vulnerable to adversity.

Read more: 1 in 5 kids start school with health or emotional difficulties that challenge their learning

There are several reasons that could explain this. Early speech and language skills develop through interactions children have with their parents. These interactions can be different in families experiencing adversity, due to challenges such as family stress and having fewer social supports.

Families experiencing adversity may also have fewer resources (including time and books) to invest in their children’s early language and learning.

Why is this important?

It is really challenging for children starting school with language and pre-reading skills to catch up to their peers. They need to accelerate their learning to close the gap. 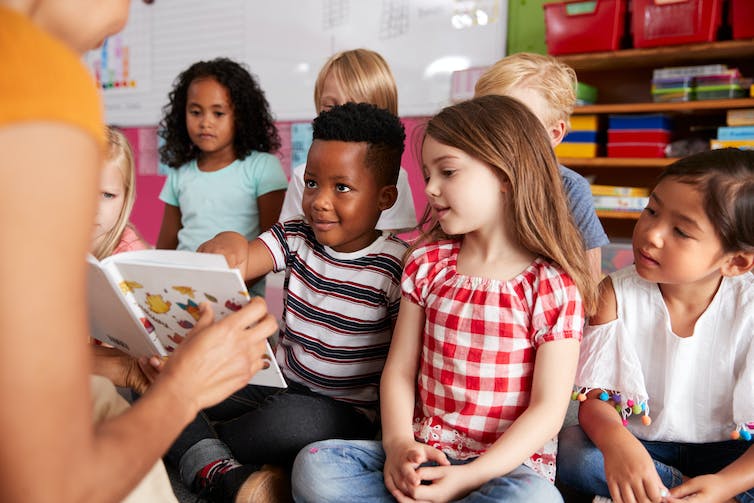 It is challenging for children entering school behind their peers to catch up. Shutterstock

Put into context, if a child starts school six months behind their peers, they will need to make 18 months gain within a year to begin the next school year on par with their peers. This is not achievable for many children, even with extra support, and a tall order for many schools.

Early reading difficulties often continue throughout the primary school years and beyond. Sadly, we also know that the long-term impacts of language and pre-reading difficulties don’t just include poor reading skills, but problems which can carry into adulthood.

These can include struggling academically, difficulties gaining employment, antisocial behaviour and poor well-being.

These results should be concerning for us all. There are clear and extensive social costs that come with early language and pre-reading difficulties, including a higher burden on health and welfare costs and productivity losses.

These impacts are particularly worrying given the significant school disruptions experienced due to the COVID-19 lockdowns. School closures will have substantially reduced children’s access to additional support and learning opportunities, particularly for those experiencing adversity, further inhibiting opportunities to catch up.

Read more: Victoria and NSW are funding extra tutors to help struggling students. Here's what parents need to know about the schemes

Our best bet is to ensure as many children as possible start school with the language and pre-reading skills required to become competent early readers.

For example, ensuring all children have access to books at home has shown promise in supporting early language skills for children experiencing adversity.

We know which children are at greatest risk of struggling with their early language and pre-reading skills. We now need to embed this evidence into existing health and education services, and invest in supports for young children and families to address these unequal outcomes.