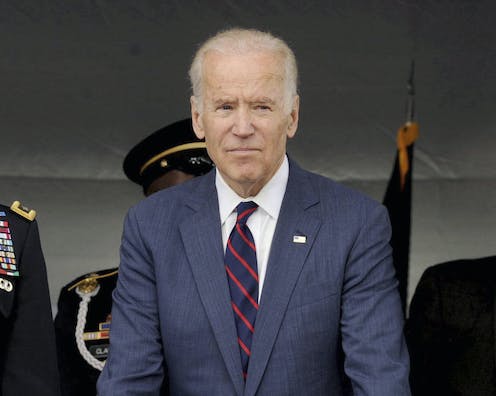 Joseph R. Biden Jr is the most experienced person to become president in US history. A senator for 36 years, with wide-ranging experience and leadership across domestic and foreign policy, and vice president for eight years with Barack Obama, with a full parentship between the two men on all aspects of...

Joseph R. Biden Jr is the most experienced person to become president in US history. A senator for 36 years, with wide-ranging experience and leadership across domestic and foreign policy, and vice president for eight years with Barack Obama, with a full parentship between the two men on all aspects of Obama’s agenda, from health care to terrorism.

That experience has paid off with the exceptionally smooth start to his administration. Appointments have been made steadily, with wide acceptance. Communications from the president have been clear and concise. Both have been in sharp contrast to his immediate predecessor.

With three presidential campaigns in his own right, and two more with Obama, Biden has come to know America as few have. His experiences across the country have only reinforced the core beliefs he brings to the Oval Office: to heal America and help bring the country together, provide economic security and opportunity for Americans from all walks of life, and redress profound legacy issues including racial justice, climate change and immigration.

Biden made his legislative agenda quite clear throughout the 2020 presidential campaign. While each of the policy initiatives are complex, involving competing ideas and policy prescriptions, Biden was able to sell his program to voters as a responsible, pragmatic, centred, rational and commonsense approach that dealt with core issues that most voters recognise require attention. They are:

In these first few weeks of the Biden administration, it is clear that success on the first two overarching issues of urgency – ending the pandemic and restoring the economy – was essential. And Biden succeeded; the American Rescue Plan is now law. It is clear to most Americans that while the management of the pandemic was a disaster, the vaccine rollout has been a success. 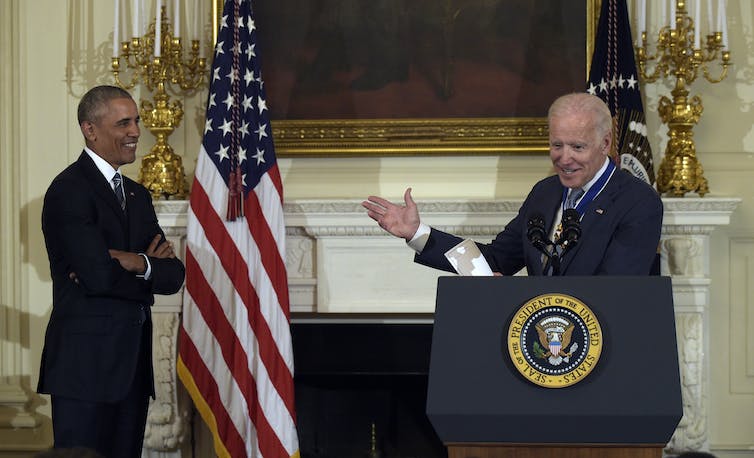 Joe Biden is the most experienced person to become president in US history, having served in many roles including, for eight years, as vice president to Barack Obama. AAP/AP/Susan Walsh

There was a deep understanding – which Republicans recognised as much as Democrats – that if Biden had failed on this first hurdle, his presidency would have been permanently damaged. In fact, failure to win congressional approval on the American Recovery Plan would have meant Biden was unable to win congressional approval of virtually all the other priority measures listed above.

The key to understanding what Biden can accomplish in Congress requires an appreciation of the political dynamics that affected, and ultimately overcame, Obama’s presidency. Indeed, the lessons from the 111th Congress – the first two years of Obama’s first term – are the guideposts for Biden’s strategy and approach to winning in this 117th Congress.

What is striking about this partial re-creation of the landscape on the Hill when Obama entered office was that the Biden agenda is, to a significant degree, similar to the priorities articulated by Obama in 2009. This includes rebuilding an economy struck down by crisis, addressing an urgent health-care reform agenda, securing progress in the epic battle to combat global warming, and a host of other compelling social priorities.

The urgency of what Biden has undertaken is clear. He knows that if he fails on dealing with the pandemic while shoring up the economy, his presidency is lost. That defeat would mean he would be unable to leverage the votes in Congress to do the other big things on racial justice, climate change, and immigration.

And the Republicans know it – and therefore feel no need to back off their headlong embrace of extremism and their intent to stop Biden’s agenda cold. The midterm elections next year traditionally punish the party that holds the White House. Republicans need a net gain of only six seats in the House, and just one in the Senate, to win control of Congress. What is the incentive for them to be truly bipartisan on Biden programs that voters will reward him for winning in Congress?

This is why Biden was determined to go big and go early – however he can get there – to get the vaccine and economic stimulus in place as soon as possible, and without Republican votes.

This is the lesson Biden draws from Obama’s setbacks in living with a too-tepid recovery program in the Great Recession in 2009. Republicans refused to go with what the economy needed. Obama and the Democrats acceded to them and, with the recovery far too slow, took a huge political hit in the 2010 midterm elections. Biden has no intention of repeating that mistake.

Where Australia fits in

There are several major issues that directly affect Australia’s interest in the context of its alliance with the United States.

China. This is the most important foreign policy issue facing Biden. While he generally concurs with the issues that President Donald Trump defined as requiring hard-nosed engagement, especially on trade, Biden’s approach is much more multilateral: development of concerted, coordinated policies on China in conjunction with US allies across Asia and Europe. This was the genesis of the recent meeting of the Quad leaders in March.

Sentiment in Congress among both Democrats and Republicans is for a continuation of confrontation with China on trade, human rights and territorial issues, including Taiwan and the South China Sea. Leaders in Congress on China policy will pay special attention to Australia’s views and outlook and will want to ensure that US policy towards China takes into account and protects Australia’s interests. US officials have made clear that China must retreat from its economic coercion of Australia. 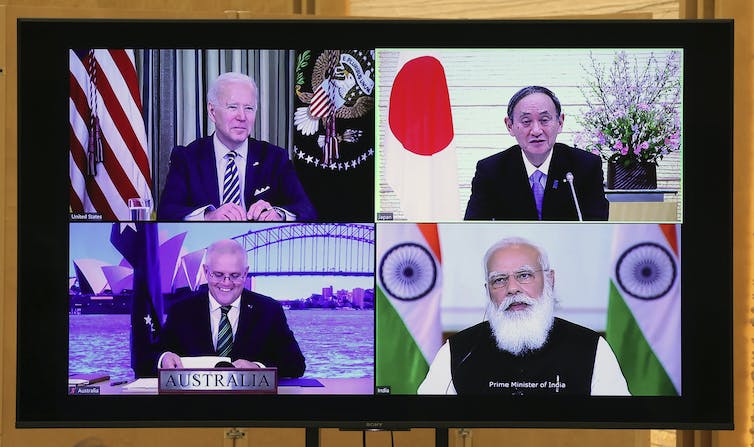 Biden’s approach on foreign relations has been more multilateral than that of his predecessor, demonstrated at the Quad meeting in March this year. AAP/AP/Ryohei Moriya

Big Tech. Australia’s strong stance against the market abuses of big tech companies, especially Facebook and Google, has captured the attention of both members of Congress who follow these issues closely, and the administration officials and agencies who oversee antitrust and consumer protection issues. Lawmakers and regulators alike will track how these issues play out in Australia, and further steps taken in parliament and by the Australian Competition and Consumer Commission.

Climate change. Climate change and global warming have already proven to be an issue that is directly affecting Australian politics. Biden’s commitment to move aggressively on climate is a pillar of his overall agenda. His stance on climate was crucial to winning the support of Senators Bernie Sanders and Elizabeth Warren for the Democratic nomination.

In office, Biden has affirmed reaching stringent emissions-reduction targets by 2050. He has also moved aggressively to reverse, by issuing executive orders, Trump policies that rolled back environmental regulations, ended carbon-intensive projects such as the Keystone XL pipeline, and permit approvals that would have opened public lands and offshore tracts to oil and gas drilling.

These measures – especially the support for firm 2050 targets – have provoked political debate here on Australia’s climate policy, as we could see from the climate summit Biden convened in April. The contours of this debate are ultimately bound by any moves in Congress to put a price on carbon. It is unclear whether Biden will proceed with such legislation. If carbon-price legislation is proposed, it would further intensify political debate on the degree to which Australian policy should mirror any such proposal.

It is clear there is nothing Prime Minister Scott Morrison can say or do that will slow, delay or stop any action Biden and his climate advisors, led by former Secretary of State John Kerry, will take to address climate change. 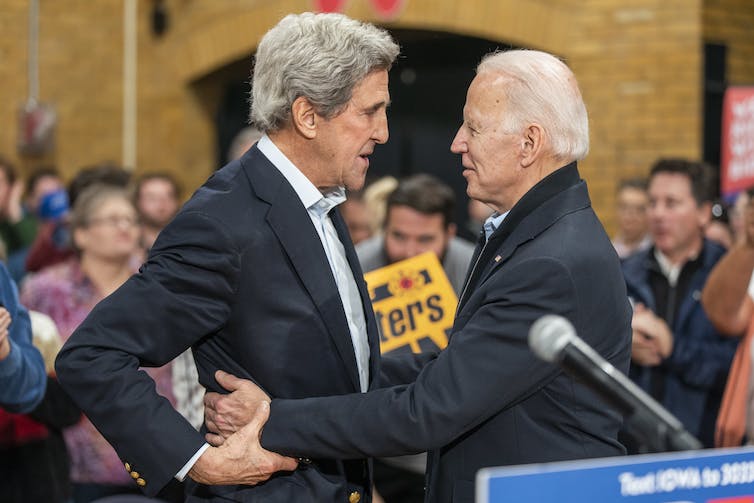 Biden and his climate czar John Kerry has moved swiftly and aggressively on the issue, leaving many to question Australia’s position. AAP/EPA/Jim Lo Scalzo

This suggests the political echo chamber in Australia on these issues will intensify to the extent that a Democratic-controlled Congress does not stop, or block, Biden administration moves to control carbon pollution and greenhouse gases.

So far, so good, but where to from here?

The only issue posed by this first year of Biden’s term is whether Australia will be working with a strong president or a weak one.

Biden’s standing in Washington and with Americans overall will determine whether he becomes a strong president who will give Australia more leverage to advance its strategic interests, especially with China, or a weak president who leaves Australia with less leverage in dealing with other world powers.

The next 100 days will be crucial. Will Biden succeed in getting his infrastructure program through Congress, or will the Republicans and some wavering Democrats block it, halting his momentum? This will be a key marker of how consequential Biden will ultimately be as president.