The revival of interest in Anzac since the 1980s has depended in part on the repositioning of soldiers as victims. We rarely celebrate their martial virtues, and instead note their resilience, fortitude and suffering.

This shift in emphasis opens up more promising space for the inclusion of women. Nurses were not warriors - they were caregivers. But they too suffered trauma as a result of their service.

In what must be regarded as something of a miracle, no Australian nurses were killed. But like the men they devoted themselves to, they were worn down and in some cases shattered by the horrors they witnessed.

From 1916, Australian nurses served in Casualty Clearing Stations (CCS), almost on the front line, often under fire and always under immense pressure. This was the most dangerous and intense working environment in which they could serve. It was far removed from the hospital ship environment at Gallipoli, or the hospitals further from the lines, where there was at least the prospect of regular respite.

The CCS was a 1915 innovation designed to provide treatment to men as soon as possible after they were injured. They operated close to the front lines, and so took nurses into the danger zone. CCS nurses were assailed by the realities of trench warfare and the demands of treating damaged men. Soldiers came to the CCS within hours of wounding, bloody and dying, needing urgent surgery for their shattered limbs and mangled bodies, or blistered and blinded from gas attacks.

The sight of the battle front was terrifying and compelling — Sister Elsie Tranter, for one, was captivated. She wrote in her diary that on her first night at a CCS near Grevillers, in March 1918 she:

[…] had the flaps on the tent fastened back and spent most of the night watching the flashes in the sky from the guns […] everything seemed so surreal.

For Sister May Tilton, it was the industrial sounds of battle that impressed. She wrote that the Third Battle of Ypres (also known as the Battle of Passchendaele) started with:

[…] a continuous rumble and roar, as of an immense factory of vibrating machinery filled the night. The pulsing sounds and vibration worked into our bodies and brains; the screech of the big shells, and the awful crash when they burst at no great distance, kept our nerves on edge.

Shrapnel falling to the ground, the thrilling sight of aerial dog fights, damp and dirty dugouts, sandbagged tents, constant artillery fire, the smell of gas, the tremble of the earth — this was the landscape of the CCS. 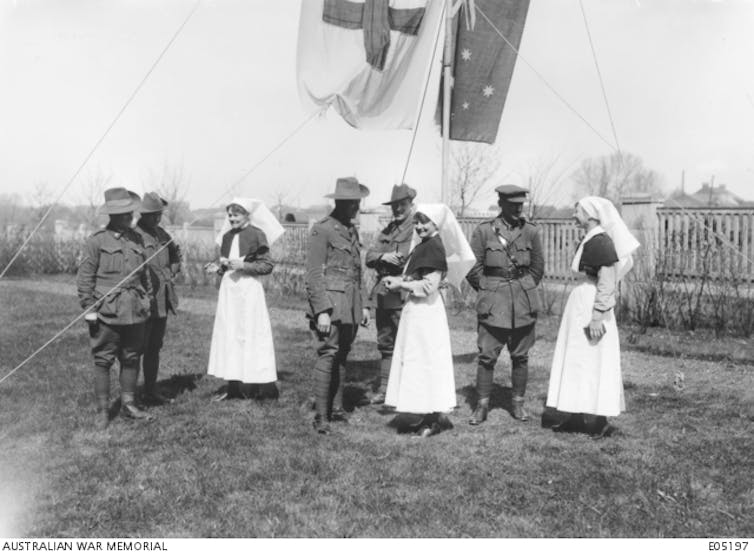 Sister Connie Keys did not expect they would come through safely, and later confided to her mother that now “I’m only afraid of being afraid”. She had experienced terror beyond measure.

CCSs struggled to cope at the height of battle, and staff worked extremely long hours to deal with the flood of casualties. One of them, 2nd Australian CCS, had a nursing staff of 20 and put through 2,800 patients in the first 18 hours of the “Messines push”.

May Tilton recalled in her memoir that she often “went on duty at 8pm, worked continuously during a ‘stunt’[a minor military operation], until the following midday, with ten minutes for supper at midnight, and half an hour for breakfast at 8am”.

The experience of nurses attests to the aphorism of war as long periods of boredom interspersed with brief periods of terror.

Static attrition warfare, conducted through artillery bombardment, gassing and close fighting, produced fighting conditions and wounds that appalled both the victims and those who cared for them.

The resuscitation wards were the greatest test for nurses. Tilton recalled that:

[…] only the worst cases could we possibly hope to attend to. The work in the resuscitation ward was indescribable. The butchery of these precious lives […] To watch them dying was ghastly.

I cannot speak of it […] I want to scream and scream.

Nurses were brought to despair – not because they were unable to save lives, for nurses were accustomed to death, but because they were unable to care for patients as they would have done “at home”. They had been trained to fashion order out of chaos, to bring a patient through the days and nights of a health crisis with patience, gentleness and watchful vigilance, and in some cases to ease their path to a painless and tranquil death. 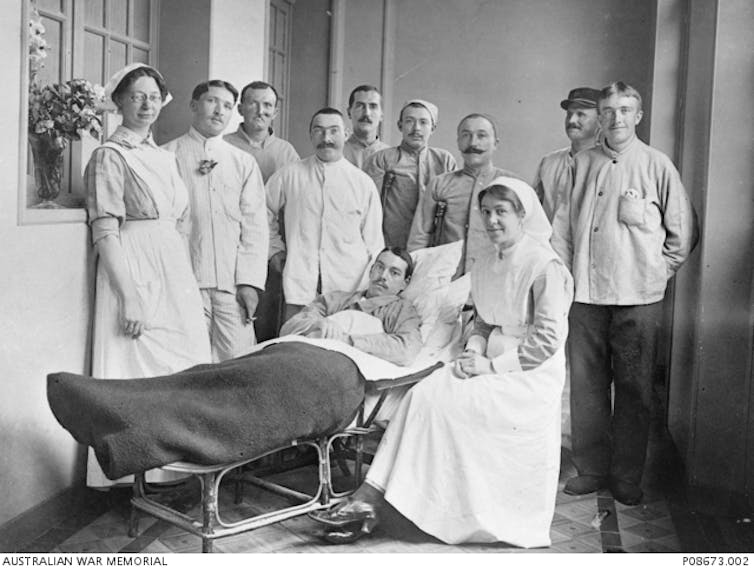 Nurses and patient at the Auxiliary Hospital Unit in Belgium. Australian War Memorial

But in war, they wrestled with the irresolvable conflict between duty and fear, and between their compassion and the realities of conflict. Death on the Western Front was ugly, chaotic and painful, so much so that some “ministering angels” came to doubt their Christian faith. “I can’t believe there is a God,” wrote Sister Alice Ross King after the Ypres Offensive, “it is too awful for words”.

Nurses, like soldiers, knew when they were at breaking point, and feared being unable to fulfil their duties. Tilton confessed:

[…] the privacy of our tents was a welcome relief for the weakness we dared not show before our brave, suffering boys.

Even the Armistice, when it eventually came on November 11 1918, brought little comfort. Anne Donnell became terribly depressed and, like many, found joy impossible when she contemplated the sadness of empty homes and hearts.

Nurses carried the burden of putting back together the victims of conflict, yet struggled to maintain their own physical and mental health. For many, their return to Australia was marred by ill-health, and what we would now call post-traumatic stress disorder.

But they also displayed courage and resilience. The experiences of Australian Army nurses on the Western Front can be a starting point, reaching through all Australia’s wars, for discussion of the response to extreme physical and psychological stress borne by those who treat the casualties of war. They too were war’s victims.