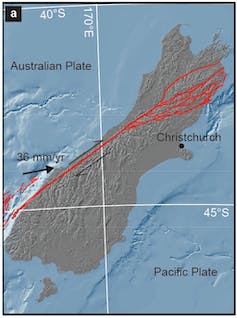 The Alpine Fault marks the boundary between the Pacific and Australian plates in the South Island of New Zealand.Author provided

The chances of New Zealand’s Alpine Fault rupturing in a damaging earthquake in the next 50 years are much higher than previously thought, according to our research, published today.

The Alpine Fault marks the boundary between the Pacific and Australian plates in the South Island of New Zealand. Author provided

The chances of New Zealand’s Alpine Fault rupturing in a damaging earthquake in the next 50 years are much higher than previously thought, according to our research, published today.

The 850km Alpine Fault runs along the mountainous spine of the South Island, marking the boundary where the Australian and Pacific tectonic plates meet and grind against each other, forcing up the Southern Alps. Over the past 4,000 years, it has ruptured more than 20 times, on average around every 250 years.

The last major earthquake on the Alpine Fault was in 1717. It shunted land horizontally by eight metres and uplifted the mountains a couple of metres. Large earthquakes on the fault tend to propagate uninhibited for hundreds of kilometres.

Until now, scientists thought the risk of a major earthquake in the next 50 years was about 30%. But our analysis of data from 20 previous earthquakes along 350 kilometres of the fault shows the probability of that earthquake occurring before 2068 is about 75%. We also calculated an 82% chance the earthquake will be of magnitude 8 or higher.

From space, the fault appears like a straight line on the western side of the Southern Alps. But there are variations in the fault’s geometry (its orientation and the angle it dips into Earth’s crust) and the rate at which the two plates slip past each other.

These differences separate the fault into different segments. We thought the boundaries between these segments might be important for stopping earthquake ruptures, but we didn’t appreciate how important until now.

Differences in geometry and the rate of slip between the tectonic plates create sections along the Alpine Fault. Author provided

We examined evidence from 20 previous Alpine Fault ruptures recorded in sediments in four lakes and two swamps on the west coast of the South Island over the past 4,000 years. From this evidence, we built one of the most complete earthquake records of its kind.

Once we analysed and dated the sediments from lakes near the Alpine Fault, we were able to see new patterns in the distribution of earthquakes along the fault. One of our findings is a curious “earthquake gate” at the boundary between the fault’s south western and central segments. It appears to determine how large an Alpine Fault earthquake gets.

Forecasting the next Alpine Fault earthquake

From the record of past earthquakes it is possible to forecast the likelihood of a future earthquake (i.e. a 75% chance the fault will rupture in the next 50 years). But from these data alone it is not possible to estimate the magnitude of the next event.

For this we used a physics-based model of how earthquakes behave and applied it to the Alpine Fault, testing it against data from earlier earthquake sequences. This is the first time we have been able to use past earthquake data that span multiple large earthquakes and are of sufficient quality to allow us to evaluate how such models could be used in forecasting.

The physics-based model simulated Alpine Fault earthquake behaviour when we included the variations in fault geometry that define the different fault segments. When the simulation is combined with our record of past behaviour it is possible to estimate the magnitude of the next earthquake.

This means we’d expect the next earthquake to be similar to the last one in 1717, which ruptured along about 380km of the fault and had an estimated magnitude 8.1.

Our findings do not change the fact the Alpine Fault has always been and will continue to be hazardous. But now we can say the next earthquake will likely happen in the next 50 years.

We need to move beyond planning the immediate response to the next event, which has been done well through the Alpine Fault Magnitude 8 (AF8) programme, to thinking about how we make decisions about future investment to improve infrastructure and community preparedness.