Chinese Australian history is primarily told as a history of men. Population figures suggest why — in 1901, there were almost 30,000 Chinese men in Australia, yet fewer than 500 women.

Have you ever heard, for example, of Darwin-born Lena Lee — teacher, book-keeper and vice-president of the Chinese Nationalist Party in Darwin in the late 1920s? Or of Gwen Fong — activist, student Communist and doctor, who graduated from Medicine at Melbourne University in 1947?

What happens to our understanding of Australian history when we look at the lives of women like these?

By the turn of the 20th century, the Chinese community was an established, although marginalised, part of Australian society. For more than half a century, migrants from southern China had come to the Australian colonies in pursuit of new opportunities to support themselves and their families. 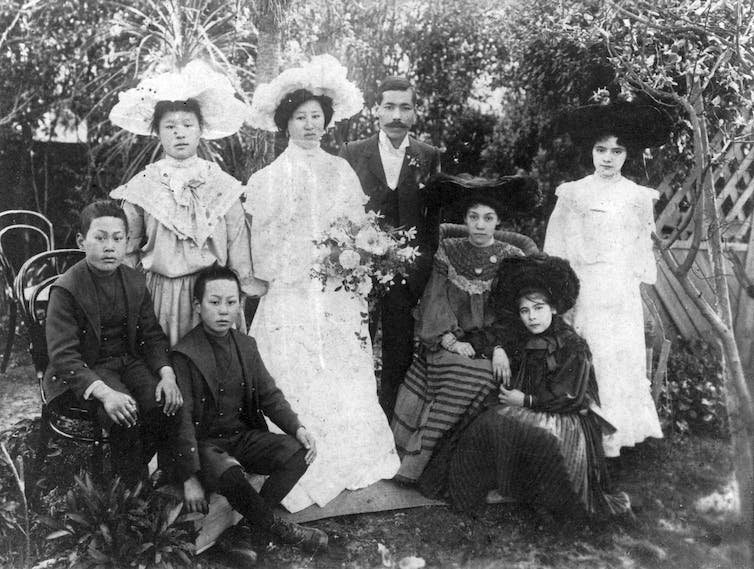 Almost all of the Chinese who came to colonial Australia were men. Most were labour migrants who came to the colonies to work and send money home — often known as “sojourners”. Over time some established lives and livelihoods in Australia and saw a future for themselves there.

A comparatively small number of wives and children came out to join their husbands, while other men formed local families with white women or Aboriginal women.

Read more: Twelve charts on race and racism in Australia

From the earliest days of Chinese immigration to Australia, Chinese men noted how the difficulties they faced meant that they would not, for the most part, contemplate relocating their families. As well as laws and policies that restricted the rights of Chinese, the day-to-day living conditions in the colonies could be harsh and isolating, particularly in goldmining settlements and rural districts. 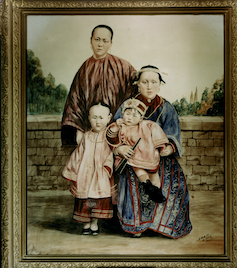 “Can it be wondered at?”, asked Louis Ah Mouy, Cheok Hong Cheong and Lowe Kong Meng in their famous 1879 treatise on The Chinese Question in Australia. Since Chinese were treated as “outcasts and pariahs” and “subject to be insulted and assaulted by the ‘larrikins’ of Australia”, why would they bring out their wives and families too?

From the Chinese perspective, there were also strong reasons for women to stay put.

Most Chinese in Australia came from the rural Pearl River Delta region in the southern province of Guangdong. In their home communities, life was centred around the ancestral home and village, and married women took on the role of caring for their parents-in-law, bearing and raising their husband’s children, and tending to the ancestral shrines of their husband’s family.

Few women had the autonomy to migrate overseas except as wife or daughter, or perhaps as a maid servant. The migration of women and girls to Australia mostly therefore took place within the context of the family. 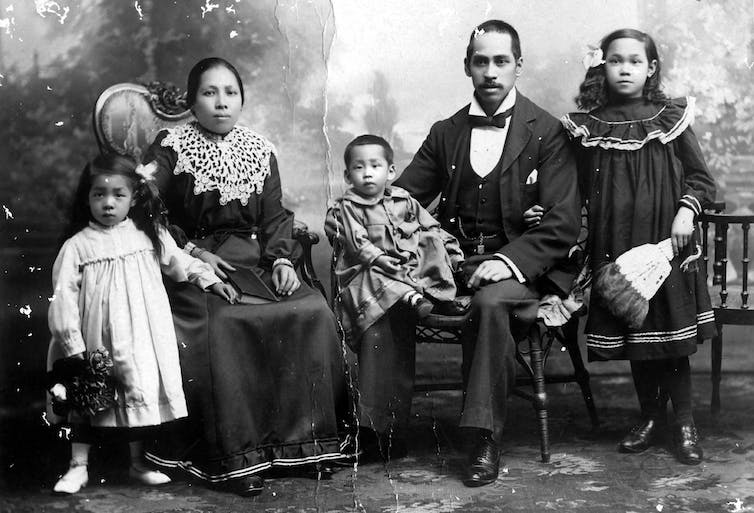 Population figures show the comparatively small numbers of Chinese women in Australia over the 19th and early 20th centuries — but they also show that Chinese women and girls were, in fact, present.

The numbers of Chinese women and girls in Australia grew as the decades passed, through migration and, more significantly, through the birth of daughters on Australian soil. 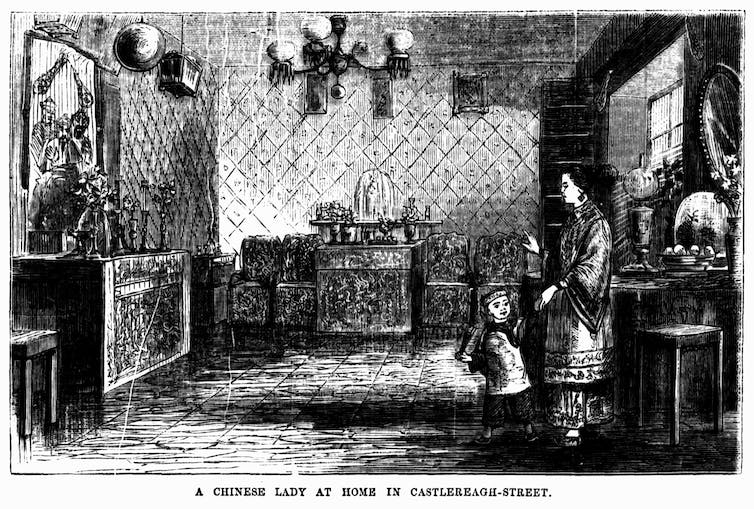 This was despite 19th-century anti-Chinese immigration laws and the continuation of discriminatory measures under the White Australia Policy after 1901. Keeping Chinese women out was central to the maintenance of White Australia. As Prime Minister Alfred Deakin remarked in parliament in 1905:

If we were to throw open the door to an influx of Chinese women and children we should reverse the policy […] and undo all the good we have accomplished.

Researching the lives of Chinese Australian women in the past poses particular challenges, from the seemingly simple task of identifying their names to locating historical sources that tell us about their lives. The fragmentary traces of Chinese Australian women’s lives — particularly those in the 19th century — necessitate a creative approach. We need to use a diverse range of sources — from birth certificates to wedding photographs to interviews with descendants.

Locating women in the past 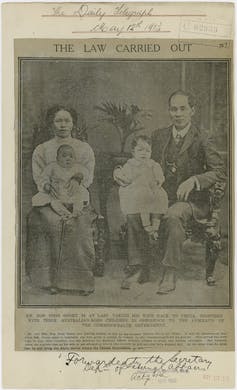 Photograph of Ham Hop, her husband Poon Gooey and their daughters, Lena (left) and Queenie (right), on their departure for China in May 1913, from Sydney’s Daily Telegraph, 12 May 1913. National Archives of Australia: A1, 1913/9139

Our new book reveals the surprising, engaging and inspiring stories that emerge when we take the time to look for evidence of Chinese Australian women’s lives.

Ham Hop was born in c. 1883 and came to Australia as the wife of a Geelong businessman in 1910. The couple had married a decade earlier in China but had lived apart ever since.

Arriving on a temporary permit under the Immigration Restriction Act, Ham Hop became a cause célèbre as her husband fought for her to be allowed to remain in the country permanently.

Despite widespread public support, particularly from the Christian churches, Ham Hop and her two Australian-born daughters left Australia in 1913 on the threat of deportation. Ham Hop was reported to have said on her departure:

Mary Chong, like Ham Hop’s two daughters, was born Australia, in Dubbo in 1908. Mary became the first Chinese woman to graduate from an Australian university (USyd, BA 1929, DipEd 1930). Fluent in English and Cantonese, after graduating she became English Secretary for the Consul General of China in Australia.

Mary’s career then took her to China, where she learnt Mandarin and worked in government and the media in the 1930s and 1940s. Later in life she returned to Australia with her Chinese American husband and their children.

By looking closely at the stories of Chinese Australia women and girls — like Mary Chong, Ham Hop, Gwen Fong and Lena Lee — we learn new things about our nation’s history and about its long connections with China.

We also see how, growing up in and between countries and cultures, Chinese Australian women’s lives were shaped — but not necessarily defined – by social, familial and political forces around them.