It’s official: Australians endured the coldest, wettest summer in at least five years thanks to La Niña, a climate phenomenon over the Pacific Ocean.

Before we knew it, autumn rolled in bringing more rain. Tragically, it led to widespread flooding across New South Wales, but elsewhere it helped to create more puddles. In our urban environments puddles are inconvenient: they can damage property and block our paths. But from a biological perspective, puddles are very important components of microhabitats and biodiversity.

We know for many animals — including birds and pets — puddles are a ready source of drinking water and provide a much-needed bath after a hot and dusty day. They’re also well known for providing water-reliant species such as mosquitoes with opportunities for breeding, and many of us may remember watching tadpoles developing in puddles as children.

But puddles make more nuanced and subtle contributions to the natural world than you may have realised. So with more rain soon to arrive, let’s explore why they’re so valuable. 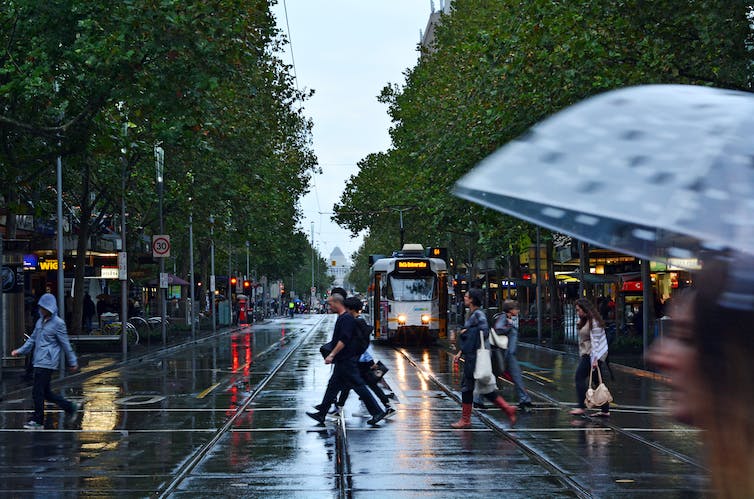 Puddles are getting harder to find in urban environments. Shutterstock

Puddles are a diverse lot. They can be small or large, shallow or deep, long lasting or gone in a matter of hours. If you look closely at a puddle you will often find it is not even, especially on a slope.

Puddles consist of small, naturally formed ridges (berms) and depressions (swales). The berms form from silt and organic matter like leaf litter, which act as mini dams holding back the water in the swales behind them.

Berms and swales can be hard to see, but if you look closely they’re everywhere and contribute to the retention of water, affecting the depth, spread and the very existence of the puddle.

All of this means they meet the needs of different species. 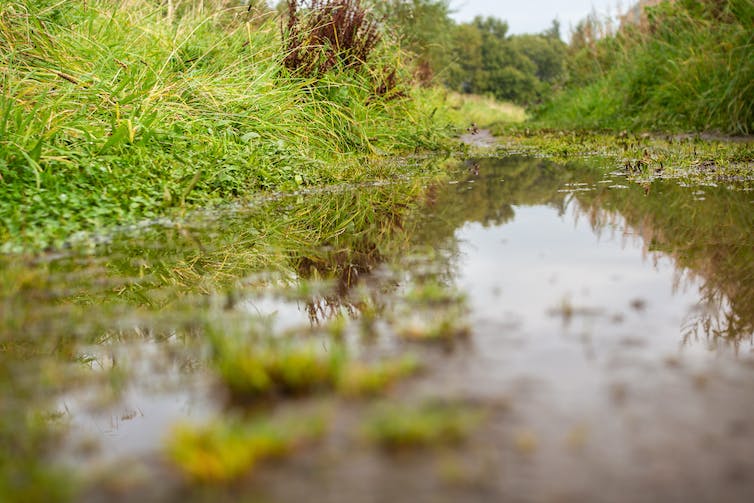 The tiny ridges and depressions in puddles can make a big difference to wildlife. Shutterstock

On rainy days you may have seen birds such as magpies feeding on worms that wriggle to the surface. Worm burrows can be two to three metres deep and many species might come to the surface to feed on leaf litter.

Worms emerge during and after heavy rain when water floods their burrows and soil becomes saturated. The worms won’t drown but they do need oxygen, which is low in very wet soils.

Often in drier weather, getting a worm is not as easy as you might think — not even for the legendary early bird. So when heavy rain drives worms to the surface, it’s party time for birds that feed on them, and they make the most of the opportunity. 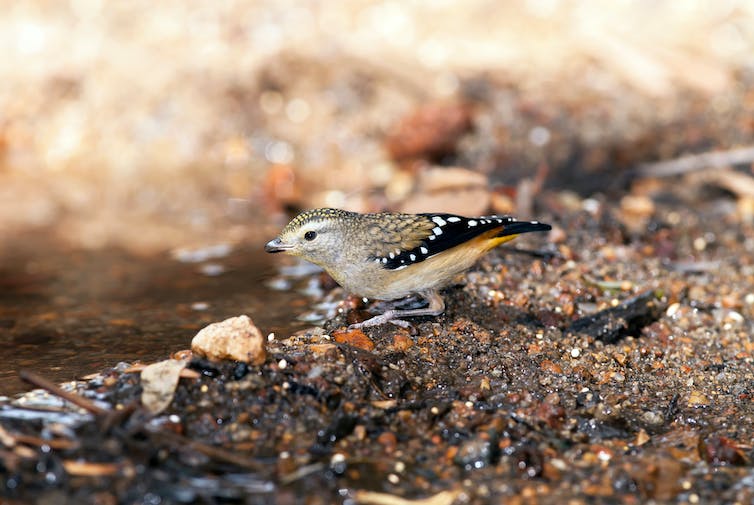 Swales in puddles often persist for days, which allows water-dependent insects to breed. Mosquito larvae, for instance, live in water for between four and 14 days, depending on temperature (so if you’re worried about mozzies, then remember puddles have to persist for days before the pesky pests emerge).

Tadpoles take between four and 12 weeks to develop into frogs, and requires a deeper, long-lasting puddle. But these puddles are becoming rarer in urban areas, and so it’s not often you see tadpoles or frogs in our suburbs.

Why seeds love them

Puddles also provide small, but important, reservoirs where seeds of many plant species germinate. In some cases, the seeds have chemical inhibitors in them, which prevent the seeds from germinating until after a period of heavy rainfall.

Then, the inhibitors are leeched from or diluted within the seeds, allowing them to germinate. Many desert species have this adaptation, including Australian eremophilas (emu bush).

Read more: La Niña will give us a wet summer. That's great weather for mozzies

In other cases, plants that grow all year round (annoyingly, weeds among them) need the dose of water puddles provide to kick start their very rapid growth and reproduction.

Easily germinated plants (such as tomatoes and cabbages) and ornamental flowering plants (such as hollyhocks and delphiniums) often require just a little extra water to trigger the whole germination process. 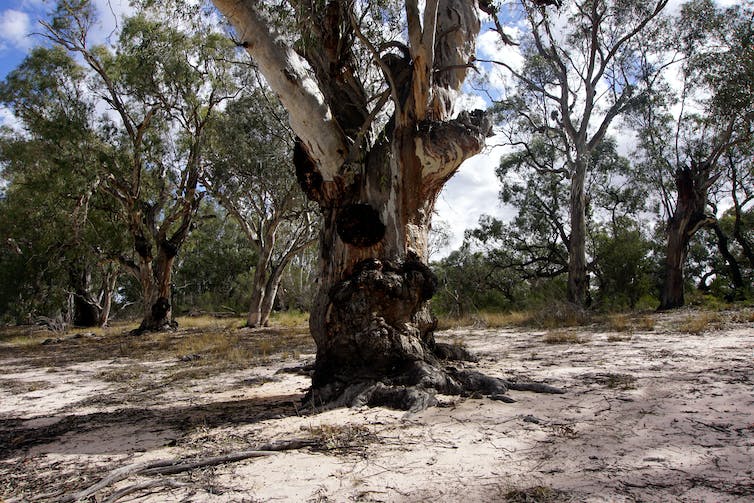 Puddles can wash away plant-inhibiting chemicals from the soil. Shutterstock

What’s not so well known, however, is river red gums produce chemicals that rain washes from their leaves, accumulating beneath the tree. These chemicals can inhibit the growth of plants, such as weeds, under the canopies.

This effect — where chemicals produced by one plant have an effect on other plants — is called “allelopathy”. Many wattle species produce allelopathic chemicals and so do some important food plants, such as walnuts, rice and the common pea.

River red gum allelopathic chemicals can prevent the trees’ own seedlings from growing near them. So river red gums require floods to wash the chemicals from the soil away. This mechanism allows river red gums to germinate and regenerate when the soil is wet, and in places away from the competition of mature trees.

Read more: The river red gum is an icon of the driest continent

Puddles can do the same thing, on a small scale, ensuring trees have plenty of opportunities to persist in the wild. This pattern of regeneration is important to provide a mosaic of species and trees of different ages, making up a diverse range of habitats for other wildlife.

Puddles are no piddling problem 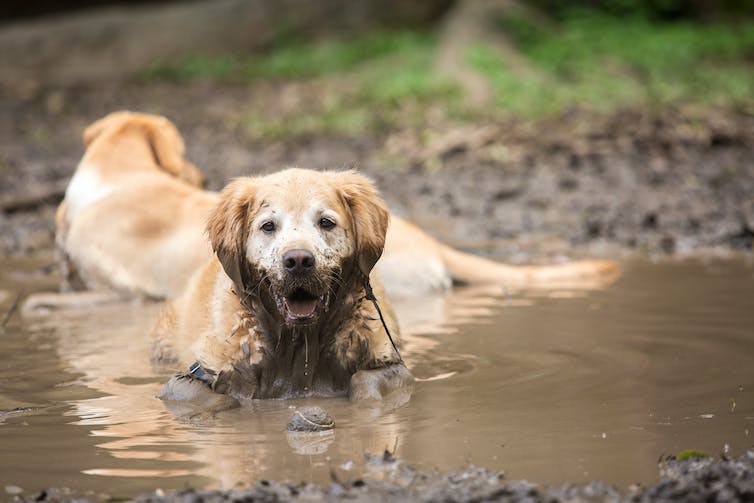 Puddles are becoming harder to find in the suburbs. Shutterstock

As property developers iron the creases from our created landscapes with much less open space and more paved surfaces, puddles are becoming harder to find close to home.

Taking away puddles removes a whole range of microhabitats, jeopardising the chances of a diverse range of species to breed and persist, especially in urban areas. These days, any loss of biodiversity is worrying.

So when you’re next out and about after or during heavy rain, keep an eye out for puddles.

Remember the life that depends on them and, if you can, try not to disturb them. Perhaps capture the joy of jumping over — rather than in — them. They are not just a nuisance, but a key to a nuanced and biodiverse local community.

Authors: Gregory Moore, Doctor of Botany, The University of Melbourne